5 things Republicans would call treason if Democrats did them

What better way to celebrate the 4th of July than with a reminder of how hypocritically petty the GOP is? 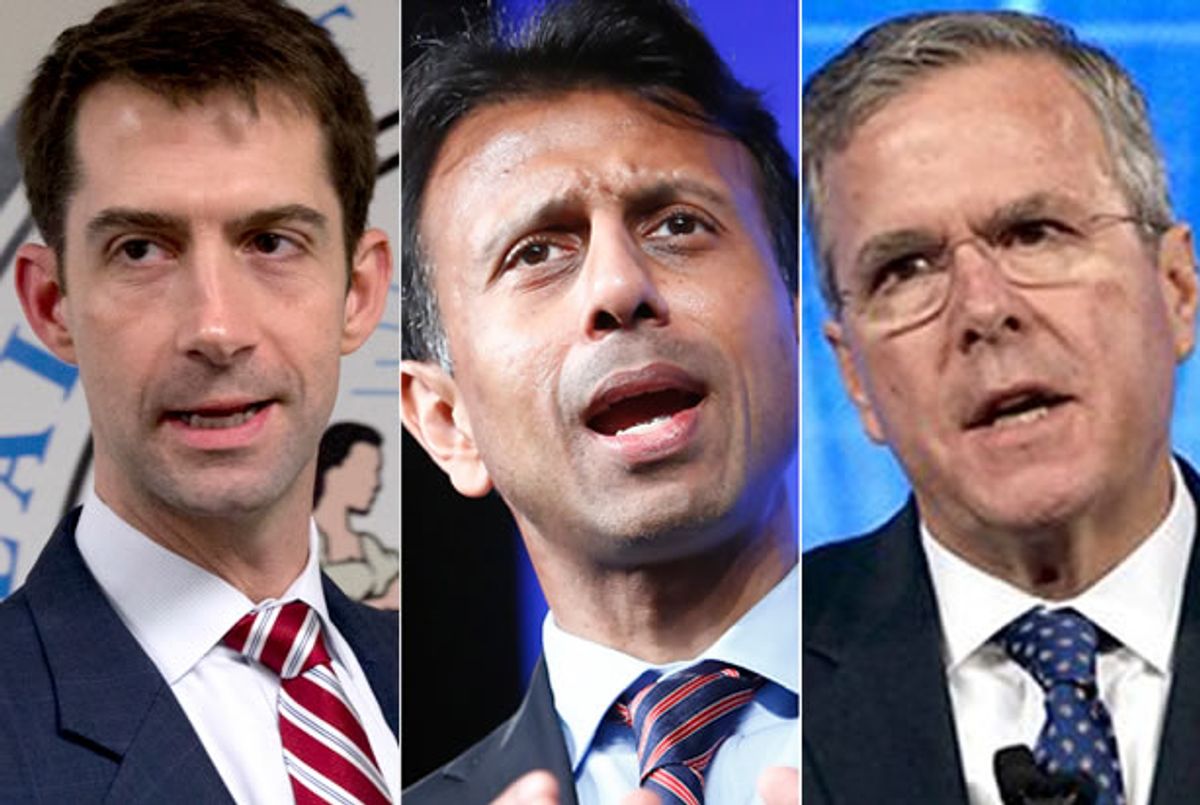 There's no better time than the Fourth of July weekend to think about the true definition of patriotism -- and how malleable it becomes when Republicans need to justify their opposition to a Democratic position or policy. Because if Democrats had pulled anything resembling any of these recent GOP stunts, Republicans would have demanded their immediate arrest.

Conservatives value nothing above the Constitution -- written by Jesus through the minds of the sainted Framers -- and Article III unambiguously states that judicial power "shall be vested in one Supreme Court" to rule them all. Just imagine how apoplectic Republicans would become if Democrats recommended altering the immortal words of God's chosen document after a Supreme Court decision didn't go their way. Not that you have to imagine too hard, though, given the way Republicans respond to any attempt to violate their precious Second Amendment.

2. Arkansas Senator Tom Cotton and 46 Republican colleagues writing to the leaders of Iran behind the president's back

You know what really doesn't help already tense nuclear negotiations? "Informative" letters from your political opponents that fundamentally undermine not only the current president's bargaining position, but the ability of future presidents to claim to be bargaining in good faith. But that's exactly what Cotton penned and 46 of his closest friends signed -- an invitation to the leaders of Iran to ignore any ignore any deal the Obama administration might strike on the grounds that the next president wouldn't uphold it.

"I'm going to be objecting to this bill because it actually throws money away," the Oklahoma Republican said. Had he been a Democrat, conservatives would have howled about how 22 combat veterans kill themselves daily and insisted that by failing to support this bill, Democrats are basically bathing in the blood of Our Troops. "It's almost as if they want our brave men and women in uniform to kill themselves," they would have shouted on the Senate floor.

If Hillary Clinton accidentally accepted a legally dubious campaign donation, Fox News would slap a "-gate" on it before the day broke and be comparing it to Benghazi by night's end. Whereas the younger Bush didn't merely accept such a donation, he built his entire campaign's fundraising strategy around it -- but the only people you hear calling for him to recuse himself from the race are the Fox News personalities who don't think he's conservative enough to represent their Grand Ol' Party.

5. Representative Mo Brooks threatening to send the president to jail over executive action on immigration

For a group of people who constantly declare the need for America to appear a bastion of strength before the wary eyes of world, Republicans are constantly suggesting that President Obama could easily fall prey to most ridiculously petty schemes. Case in point, Representative Mo Brooks' plan to punish the president for his "reckless conduct" by forcing him to "incur the wrath...that comes with a contempt citation with potential fines and jail time." Diminishing the office of the president to score cheap political points? Some dare call that treason!

Or would, you know, if a Democrat had done it.