Our nation's most toxic obsession: The violent history of "Real Americans"

From its earliest beginnings to its 1st black president, America has seen too much bloodshed over who truly belongs 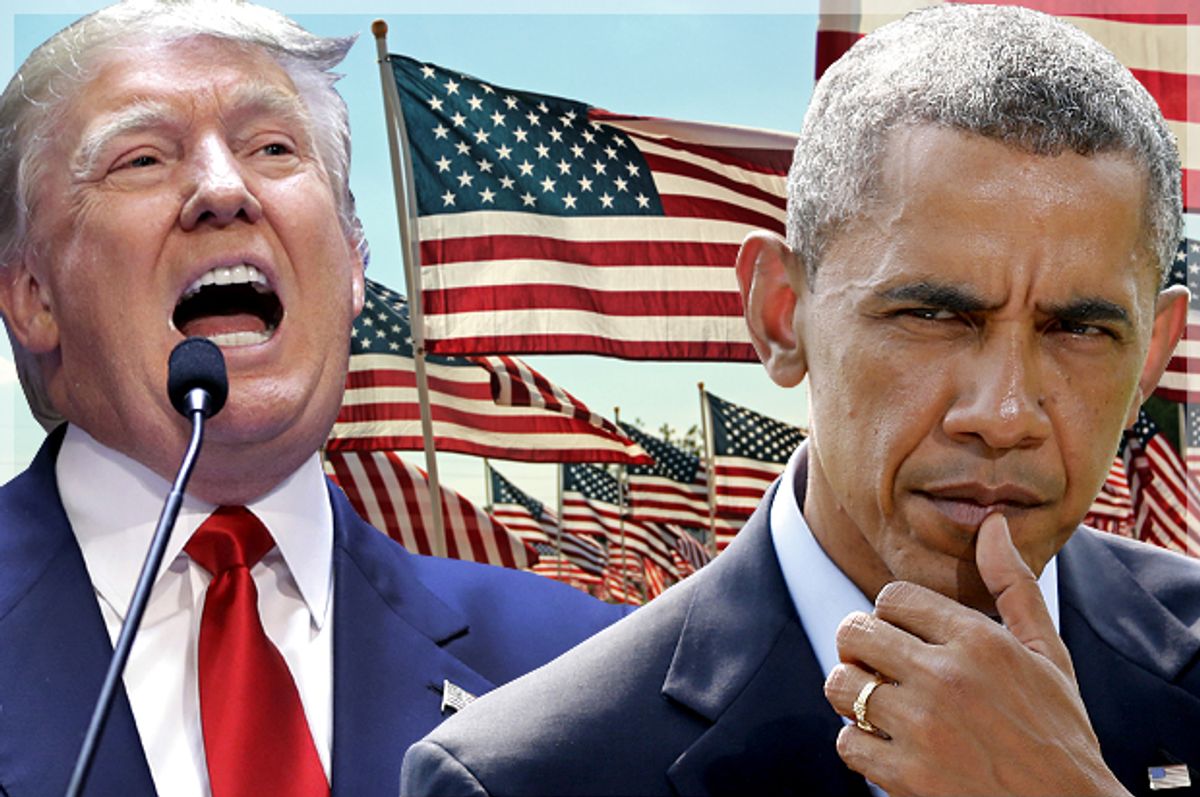 From the early days of our nation, we have been debating what constitutes a "Real American." If one were to define a real American as a person indigenous to the continent we know as North America, one would certainly have to say that the only Real Americans are native Americans. But since the United States as we know it was formed by the offspring of British colonialists and religious migrants who wanted the colony for themselves, we can fairly say that from the beginning that has never been an accurate definition, even though it probably should have been. (Some people have even described the original "nativists" as the Indians, which I think is wrong. They were defending their own lands against invasion, which isn't the same thing at all.)

Needless to say the most repressed immigrants in America have always been the descendants of African slaves. They didn't ask to come here and they certainly didn't ask to be slaves. But their ancestors were here long before most of the rest of us and their claim to being Real Americans could not stronger. Of course nativists usually don't see it that way, simply because most nativists are also racists. All you have to do is look at the nonsensical conspiracy theory about the first African American president being a "foreigner"to see how mixed up race and ethnicity are with those folks.

Be that as it may, going all the way back to the beginning, this country has been a nation of immigrants from all over the world. And while we have, at various times and in many different ways, celebrated that fact, we have also been a xenophobic society from the get-go. In the 19th century, the original Americans were upset about Irish catholic immigration. There was fighting in the street over that one for many decades. And soon there was hatred towards German immigrants (the single largest ethnic sub-group in America, by the way) with complaints about their alleged unwillingness to assimilate properly and their habits of speaking their mother tongue, sending their kids to their own schools, and attending their German church (Lutheran, of course). In the 1890s, a Wisconsin Governor said:

"We must fight alienism and selfish ecclesiasticism.... The parents, the pastors and the church have entered into a conspiracy to darken the understanding of the children, who are denied by cupidity and bigotry the privilege of even the free schools of the state."

Those Germans just refused to assimilate. And look what's happened. They're everywhere.

You don't even want to think about the hatred toward the Chinese. It was one thing to import them by the thousands to do the heavy scut work of building railroads and the like, quite an other to consider them Real Americans. The Irish Americans who had been the object of xenophobic rage in earlier decades were particularly upset by the Chinese, and they led the way to the Chinese exclusion act in 1882, the first of America's official federal immigration containment programs.

In the 20th century, all those previously considered unworthy (except the Chinese, of course) were suddenly okay, as a huge influx of immigrants from southern and eastern Europe decided to come to the land of opportunity. The government went to work to ensure that this didn't get out of hand. Senator Henry Cabot Lodge proposed literacy tests, making the intention very clear:

It is found, in the first place, that the illiteracy test will bear most heavily upon the Italians, Russians, Poles, Hungarians, Greeks, and Asiatics, and lightly, or not at all, upon English-speaking emigrants, or Germans, Scandinavians, and French. In other words, the races most affected by the illiteracy test are those whose emigration to this country has begun within the last twenty years and swelled rapidly to enormous proportions, races with which the English speaking people have never hitherto assimilated, and who are most alien to the great body of the people of the United States.

You can see that the Irish, being English speaking, were no longer persona non grata, although nobody wanted to mention their name. (They were mostly Catholic, which was still a bit of sticking point.) Likewise the Germans. But the rest of the world was simply not worthy of our pure-blooded English-German-Irish-French-Scandinavian American stock.

But many of those other people made it though anyway -- the country is full of descendants of all of those nationalities. And today, many of those descendants (who we call "Real Americans" in 2015) are infuriated that people from Mexico and central America want to come to the promised land and pollute our purebred English-German-Irish-French-Italian-Russian-Polish-Hungarian-Greek-Japanese-Chinese-Vietnamese-Philipino-etc American stock. They aren't too happy about the Middle eastern contingent either. Indeed, there are still many immigrants which certain shrill nativists would like to exclude:

It's tempting to see these depressing statistics as a sign that nativists like Ann Coulter have the upper hand:

No attribute is more important in the minds of Americans than being able to speak English. Nearly nine in ten (89 percent) say speaking English is an important part of being an American, while less than one in ten (9 percent) say it’s not important. There is widespread agreement on this point that crosses generational, political, and religious lines.

But it's not quite as bad as it looks:

Despite the importance Americans place on speaking English and being born in the U.S., a recent PRRI/RNS survey found that a majority (54 percent) believe the growing number of newcomers from other countries strengthens American society. Only one in three (33 percent) say it threatens traditional American customs and values. Perhaps not surprisingly, there are significant political divides on this question. Republicans (47 percent) are nearly twice as likely as Democrats (25 percent) to say the growing number of immigrants is a threat to traditional values, and Democrats are 25-percentage points more likely than Republicans (64 percent vs. 39 percent, respectively) to say immigrants strengthen American society.

Among religious groups, white evangelical Protestants stand out as being the only group where a majority (53 percent) say immigrants are a threat to traditional American customs and a minority (33 percent) say they are a strength to society. The religiously unaffiliated are the least likely “religious” group to say immigrants threaten traditional customs and values—just 23 percent say they’re a threat, while 63 percent say they strengthen American society.

Really, it's the same as it ever was. There's always someone threatening our pure-blood, hyphenated, ethnically diverse American culture with their beer and their music and their food and their foreign sounding names. Right up until we all start eating their food, drinking their beer, listening to their music and voting for people with their foreign sounding names. Then they're pure-blooded Americans just like the rest of us.

Americans should be immensely grateful for our immigrant culture. For all of our backwards ways with violence and racism our multi-ethnic, multi-racial, multi-cultural society is our greatest strength as we face a future that requires more global cooperation than in any time in human history. There will probably always be American "nativists" claiming that the wrong people are coming into our country. But they always lose the argument, every single time.