Leave U2 alone: Why did one of our best rock bands become so loathed?

From their iTunes debacle to Bono's ego, the Irish rockers catch their share of grief, but enough is enough 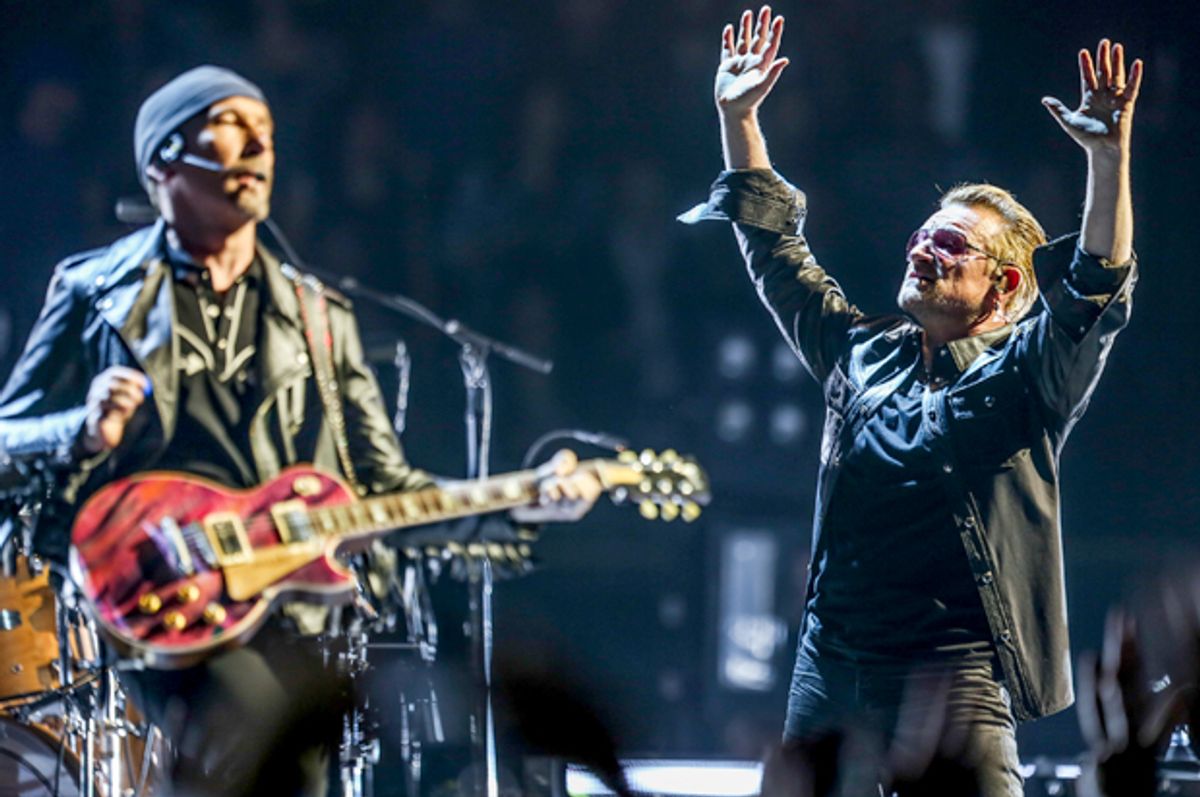 A Facebook friend recently prefaced his casual announcement that he was going to see U2 with a tongue-in-cheek addition: "Here's a polarizing subject." Indeed, very quickly, the thread devolved into fans of the band and passionate detractors mildly arguing with each other about the seemingly innocuous statement. This response was entirely predictable: U2 have always been a lightning rod for controversy and an easy target for ridicule and disdain, often and especially because of their own actions (e.g., Bono spray-painting "Rock and Roll Stops the Traffic" on a San Francisco public fountain, overindulging on red wine and disappearing for a quick nap during an interview, insulting Coldplay's Chris Martin on the radio). Even though the band members themselves are often the first to admit to any foolishness or idiocy--Bono especially--it doesn't seem to make much of a dent in the thicket of negativity surrounding them.

The paradox is striking, because from a musical standpoint, liking U2 is about as controversial as enjoying chocolate: The band members have been global superstars for well over 30 years now, having sold more than 150 million records and remained a reliable touring draw, whether their stage setup involves a giant claw or simply an innovative light and video show. But then again, in the post-"Pop" world of U2 fandom--a 15-year-plus arc of trying to make people forget about the unfairly maligned, electronic-leaning album and accompanying Popmart tour--copping to U2 fandom is an admission fraught with baggage. Certainly 2000's "All That You Can't Leave Behind" and 2004's "How To Dismantle An Atomic Bomb" did wonders to restore their reputation as a superstar rock band capable of universal uplift and communion. In recent years, 2009's tepid "No Line On The Horizon" and then last year's free-to-iTunes album "Songs Of Innocence"--another record that receives an overly bad rap--unleashed untold levels of vitriol.

Of course, U2 aren't the only massive artists on the receiving end of criticism. Once musicians reach a certain level of fame, it's open season on everything from their background to their intentions to their (perceived) overexposure. Part of this comes with the territory: Because these acts feel so out-of-reach and untouchable, they're particularly vulnerable to scrutiny, since it's unlikely any sort of negative analysis will have repercussions. (The cumulative effect of rampant Internet pile-ons and snowballing social media negativity, however, is another topic for another day.) This same kind of fame also insulates artists from having to worry about repercussions; for example, in a 2014 Guardian interview, U2 are, collectively, rather unbothered by the post-iTunes hubbub. Fitting their personalities, guitarist the Edge is pragmatic and measured; drummer Larry Mullen is indifferent to any friction; bassist Adam Clayton is logical and matter-of-fact; and Bono is equal parts proud and defensive.

The ability to be indifferent is another consequence of the luxury of fame, and an admittedly slippery slope--one that could very easily lead to the kind of arrogance that produces tone-deaf decisions or misguided comments. In U2's case, many saw Bono's recent New York Times reconsideration of the iTunes deal as the latter. “I think Apple and we got a lot of the backlash that was headed to Big Tech for knowing too much about us," he told Jon Pareles. "But in fact, Apple is not interested in every search you ever made — it’s only interested in your music, so it’s not fair to tar them with that brush. And as a person who’s been a lifelong member of Amnesty International, of all human-rights crimes I think that this kind of unwanted mail, if it’s at the top of your list or even halfway up it, your life is really fantastic.” The singer was obviously trying to not-so-subtly convey that complaining about receiving a free U2 album is a first-world problem, even if his execution inadvertently came across as him being a typically self-important do-gooder.

Yet such clumsiness is intrinsic to Bono's personality: Despite his fame and ability to hobnob and hold his own intellectually with world leaders, he's never quite grown out of being a loudmouthed Irishman who's cheerfully, proudly imperfect and always having to apologize for social gracelessness. Depending on the level of fandom, this personality trait is either entirely charming or totally irritating, which no doubt explains quite a bit about why U2 is such a polarizing band. But it's rare that Bono's intentions are malicious, which makes the scorn he and the band receive that much more tiring: While he certainly doesn't deserve a pass for some of his more controversial assertions--and his actions shouldn't be immune to reasoned critical analysis--not every comment he makes deserves to be twisted into something inflammatory.

And when appropriate, his eloquence is just the right amount of understated. The tragic, sudden death of their longtime tour manager Dennis Sheehan prompted U2 to change their official website to a photo of him and the band, along with this simple statement from Bono: "We've lost a family member, we're still taking it in. He wasn't just a legend in the music business, he was a legend in our band. He is irreplaceable." Indeed, humility isn't something often associated with U2 (mostly because of Bono), but the band know exactly when to pull back and when to step up--when being the loudest voice in the room makes sense, and when deferring to others is a better choice.

More interesting, Bono has shown flashes of humbleness in the months leading up to the launch of their current tour, especially in the wake of his serious bike accident.  On "The Tonight Show Starring Jimmy Fallon," he was entirely sheepish admitting that he was sporting a leather jacket and bike shorts at the time of his crash; speaking to the New York Times, he sounded even more chastened: "I really used to think that my head was harder than any surface it came in contact with, and I don’t anymore. I didn’t come off a Harley-Davidson. I came off a push bike and smashed myself to bits. There is no glory here." Really, Bono's defense mechanism has always been to openly acknowledge shortcomings--speaking to the Guardian about the chorus of criticism that's followed them for decades, he noted, “We were already annoying people, it was already divisive, it was already, ‘I can’t stand them, I want to kill them.' It’s the job of art to be divisive”--in order to remain one step ahead of haters. It's a classic pose: admit fault before others can point it out.

In fact, it's all too easy to forget that self-deprecation is as much a part of the U2 mythology as bluster. When guitarist Edge accidentally stepped off the stage during the tour's opening concert, U2 posted a photo of his bruised and cut-filled arm on Instagram with the groan-worthy dad-joke caption, "Didn't see the edge, I'm ok!!" Although the band received a reputation in the '80s as earnest political flag-wavers and bastions of authenticity, they're also at the same time very funny and lighthearted: Witness Bono's exaggerated Zoo TV personas and antics (e.g., ordering pizzas during a show), the ridiculous costumes the band wore circa "Pop" and goofy Instagram Photoshop jobs such as this recent birthday greeting to photographer Anton Corbijn. (According to Noel Gallagher, Bono's also quite a drinking buddy: "I’ve been drinking with him, and I’ve been leaving a bar at 6 in the morning and he’s on the bar singing opera. And he’s got a fucking gig the following night with 70,000 people.")

For as serious as U2 very much is about music, politics and charity, they often aren't taking themselves very seriously. And that's what's helped the band survive their leaner commercial years, when their sonic experiments and dabblings with giant citrus fruit made their confidence waver. In U2's hands, a combination of self-deprecation and braggadocio is often combustible--and, yes, polarizing--but it's also weirdly sustaining: It serves as the glue that grounds the band, balancing out their more earnest, introspective tendencies and pushing them forward creatively. A band doesn't stay together for nearly 40 years with no fissures or breakups without having a very unique internal relationship. At the end of the day, U2's ability to achieve equanimity and longevity despite their many differences is something spectacular to behold.

Bono Music Rock And Roll The Edge U2