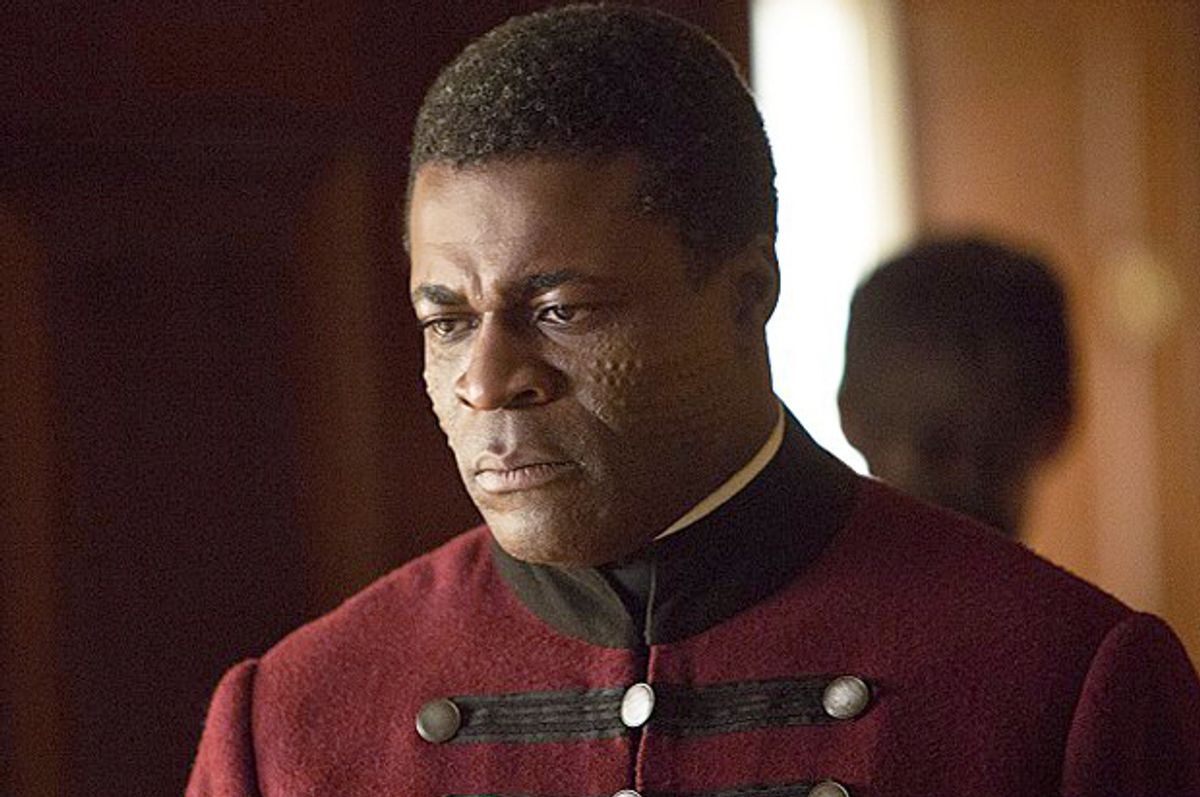 Now that we’ve gotten the barbecues and flag-waving out of the way, my fellow Americans (and those Canadians still coming off of Canada Day, I guess?), I declare it time to hole up with some gloomy Victorian Gothic television, set in cold, damp and mostly sooty London. Summertime is often the chosen season for shows with a little more genre appeal—the idea is that in order to get audiences to pay attention, TV will have to offer up more blood, more sex, more glory. But in the case of Showtime’s “Penny Dreadful,” you will have to turn the brightness all the way up on your television and close the curtains against possible distracting sunlight, because this show is not just thematically dark, it’s also literally saturated in shadows all the damn time. The characters are alternately wearing 18 layers of clothing, shivering, or, in a move that sure adds a pop of color to the viewing experience, covered in blood. As I suppose the signers of the Declaration of Independence could have told you: Britain? Nicer in theory than in practice. Better to watch on this side of the pond, with the A/C on full blast.

Perhaps because the show is so hilariously unsuited for summer weather, “Penny Dreadful” is a bit overlooked, both by audiences and the critical community. It has a campy, thriller appeal that it shares with another forlorn summer show, “Hannibal,” which got the ax from NBC a few weeks ago. But while “Hannibal” is, to my mind, merely fine, “Penny Dreadful” is fantastic—and tonight it concludes one of the most astounding dramatic runs on current television. “Penny Dreadful” has pulled together a constellation of incredible actors, sumptuous production design and the fascinating world-building of showrunner John Logan (the writer behind several James Bond films) for an immersive, careening and daring second season. I can’t predict how tonight will shake out—but based on the dozen or so cliffhangers laid out in last week’s “And Hell Itself My Only Foe,” it will at the very least be interesting.

And that is, in some ways, the best and most useful aspect I can use to try to sell new viewers on “Penny Dreadful”—it’s never boring. The show is always reaching for new, unbelievable goals, whether that’s setting a superhero origin story in an abortionist’s cottage or plotting a romance between the bride of Frankenstein and Dorian Gray. This is a show that inspires its fans to write with exclamation points and capital letters. But it’s also a show that engages with history, politics and theology with incredible sophistication—making it that rare type of show that can inspire both impassioned caps lock and impassioned think pieces.

But that duality, at the same time, makes it hard to get new viewers to try it out—it’s difficult to get someone on board a show that appears to be everything and nothing at the same time—historical and magical, romantic and campy, comedic and downright horrific. It’s also difficult to explain that the driving plot of the show is nothing less than the battle of good against evil—in the form of demon possession, the lost writings of Lucifer, and witches that cast spells in secret tongues. On top of that, half the characters in the show are characters recognizable from major works of Victorian literature: Victor Frankenstein (Harry Treadaway) and his creature (Rory Kinnear), the woman who becomes the creature’s unholy bride (Billie Piper), and Oscar Wilde’s twisted hero who never shows the effects of evil and sin on his own face, Dorian Gray (Reeve Carney).

The rest are—at least, for now—original creations of showrunner John Logan, including the murderously beautiful Vanessa Ives (Eva Green), the hapless Sir Malcolm (Timothy Dalton), and the brooding American sharpshooter Ethan Chandler (Josh Hartnett). They all work together in a show that is as much a deconstruction of Victorian thinking (as I wrote in May) as it is an earnest depiction of magic, ritual and faith as tools in the battle between good and evil. And as my colleague Genevieve Valentine (who, if you ask me, is the best critic writing on “Penny Dreadful” in the business) has discussed in her recaps at io9, that texture comes through in a show that delivers incredible, brain-searing scenes, sometimes quite hilariously at the expense of plotting.

The result is a show that scene-by-scene offers up rich, indelible imagery—Helen McCrory soaking in a bathtub of blood, Eva Green possessed at a séance, Dr. Frankenstein falling in love with his creation—that doesn’t always fit into the whole show entirely cleanly. And though that can be frustrating, it’s also a great deal of “Penny Dreadful’s" base-level excitement: It’s always doing something, and opting for failing big instead of succeeding small. It overturns convention and expectation so casually that sometimes I have to pause and rewind, asking, “Wait, did they really just do that?” It might be comical, captivating, or chilling, but whatever it is, I’ll watch.

“Penny Dreadful” is for you if you like fantasy, horror or myth; it’s for you if you’re fond of steampunk histories and women in period clothing who have no time for the nonsense of the status quo. If the gore of “Hannibal” puts you off for being amoral, “Penny Dreadful’s" wholehearted embrace of faith and meaning as crucial reckonings for each character provides solid grounding for its moments of violence. If the epic of “Game of Thrones” is a little too grim for you, “Penny Dreadful” offers the thrilling satisfaction of Vanessa Ives’ steely determination in the face of all manner of obstacles. And if the current dramatic landscape of moody antiheroes, workplace dramas and serial killer procedurals have lost their luster for you, “Penny Dreadful” will be refreshingly, reliably different.

Plus, there’s no danger of cancellation just yet. The show is renewed for its third season on Showtime—a notoriously generous network, both in terms of keeping its shows on the air and giving its showrunners creative control. Happy Independence Day—in America, even the British TV is better.