White Southern hate, stripped bare for all to see

As a nation finally confronts the truth about the Confederate flag, we join together to tear a hateful symbol down 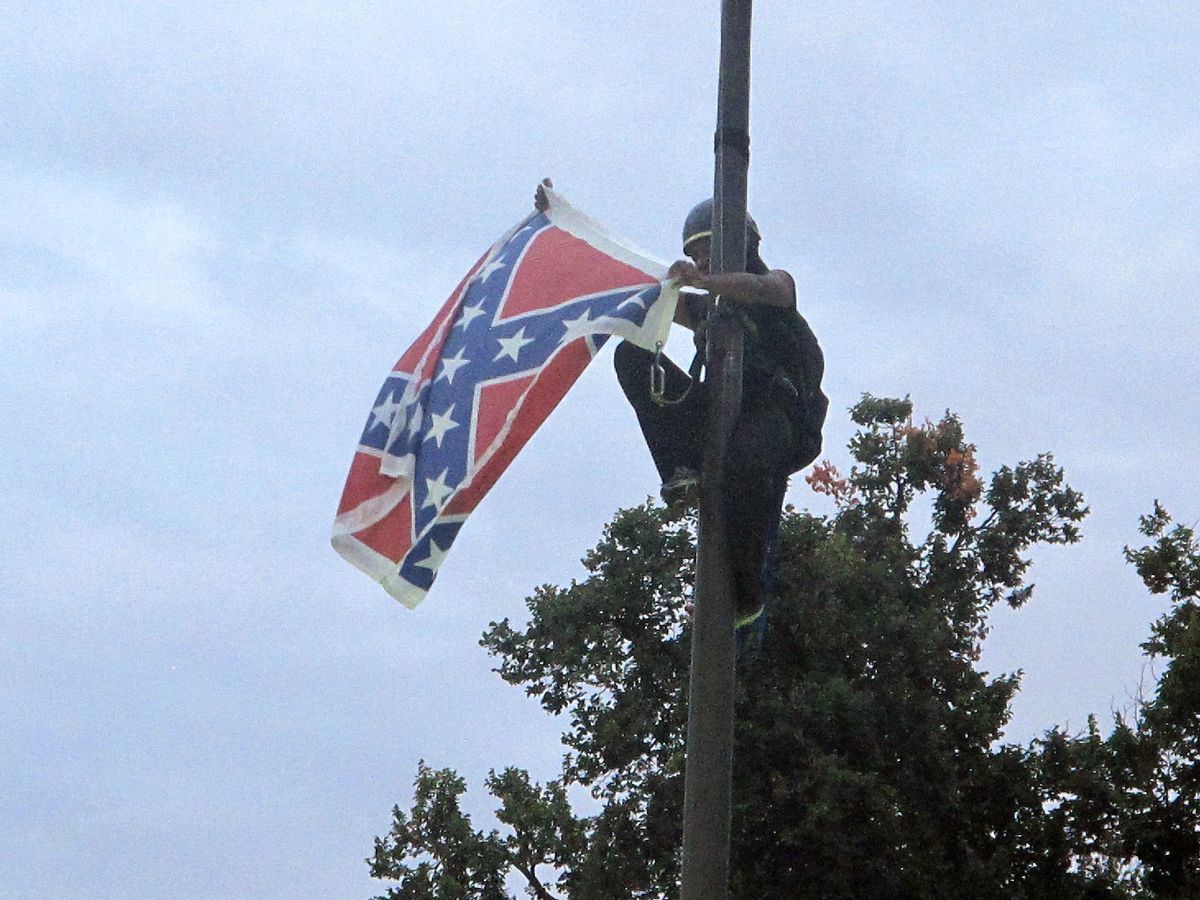 Bree Newsome of Charlotte, N.C., removes the Confederate battle flag at a Confederate monument at the Statehouse in Columbia, S.C. She was taken into custody when she came down. The flag was raised again by capitol workers about 45 minutes later. (AP Photo/Bruce Smith)
--

The fight over the Confederate battle flag may change the course of a generation of American politics. The flag is not simply about race. It is about the nature of the American government. These two fundamental American issues cannot be separated today any more than they could 150 years ago. Does the federal government have the power to promote the good of all Americans, as Abraham Lincoln insisted? Or is the nation, in fact, a loose confederation of states that can do as they wish, without worrying about treating everyone equally?

Americans answered this question in 1865 with the blood of 700,000 men and $5 billion in treasure. But the question arose again when federal courts in the 1950s demanded desegregation. It is time to resolve it, once and for all.

The history of the flag sheds important light on the fight over it. The flag at the heart of today’s struggle is not the official Confederate standard. It is a piece of the battle flag of Gen. Lee’s Army of Northern Virginia, and it came to represent the South primarily during Reconstruction. In the wake of the war, with slavery gone beyond recall, white Southerners tried to maintain white supremacy by controlling the government. They passed laws designed to keep African-Americans in a system as close to slavery as the 13th Amendment would allow. Among other things, they barred African-Americans from testifying in court or sitting on juries, guaranteeing that they had no legal recourse against whites who cheated, attacked or murdered them. To establish equality in the South, federal officers from the Freedmen’s Bureau stepped in and heard disputes between ex-slaves and white Southerners. When the officers decided in favor of former slaves about 68 percent of the time, white Southerners howled about dangerous government overreach.

It was at this point, not during the war, that Southern whites began to insist that the war had been about states’ rights, rather than about slavery. They had gone to war simply to protect American individualism from a grasping federal government, they cried.

Defeated white Southerners took this ahistorical argument into politics. They began to argue that the Republicans who controlled the federal government were exaggerating postwar violence against black Southerners to whip up white Northern sympathies. Bleeding-heart voters would then keep Republicans in power, where they would suck tax dollars out of hardworking white Americans to coddle African-Americans with schools, hospitals and public works programs. That argument got teeth when, desperate to prevent the South from falling under the control of former Confederates, congressional Republicans permitted black Southern men to vote for new Southern state constitutions. White Southerners insisted that black voting would mean a redistribution of wealth from white people to black, as black legislators would raise taxes to fund projects that would rebuild the gutted South. This “socialism” would destroy society.

Taking the Confederate battle flag as their beacon, angry white terrorists organized as the Ku Klux Klan to purge the South of black voters (and their white allies). Before the 1868 election, they killed more than a thousand Republicans, white as well as black. In response, Congress passed the 1871 Ku Klux Klan Act, which made political intimidation a federal offense. Involving the federal government enabled President U. S. Grant to stop the depredations of the Ku Klux Klan by imposing martial law in parts of the South and by having federal courts, rather than local courts, try offenders. For the next 20 years, white Southerners found ways to control black political voices by finding ways either to work with black voters or to silence them.

Fondness for the Confederacy began to wane. By the 1880s, a significant portion of the white South wanted to forget the Civil War and move the South forward into the modern era. They often talked romantically about the Old South and about the old veterans, but at the same time they were industrializing and looking beyond their own borders. In 1898, white Southerners volunteered for federal service in the Spanish American War in disproportionate numbers. By the time of the Depression and New Deal, most white Southerners were strongly attached to the federal government and the New Deal programs that were keeping them from starvation (although they continued to keep as much New Deal money as they could away from African-Americans). Efforts to lionize the Confederacy—like the carving of Confederate heroes into Georgia’s Stone Mountain—quietly died.

It was only after World War II that the Confederate battle flag started to rise to prominence again, when African-Americans who had fought in the war came home and began to call for equality. The flag became a rallying cry after Brown v. Board of Education in 1954, when the federal government insisted on desegregation. When President Eisenhower sent troops to Little Rock Central High School in 1957—the first time since Reconstruction that federal troops had been sent to the into the South to enforce government policy—reactionaries, led by James Kilpatrick at the National Review, revived the old language of Reconstruction. While their own opposition to federal government activism lay in their hatred of business regulation and taxes, these Movement Conservatives ardently embraced the racist tropes that Kilpatrick brought from his position as the editor of the Richmond News-Leader. They began to insist that the federal government was usurping power to redistribute tax dollars from white taxpayers to undeserving African-Americans. They called, once again, for states’ rights, and the Confederate battle flag came into popular use. In 1962, South Carolina legislators voted to fly the battle flag over the Statehouse. Confederate generals once again became heroes. Money began to pour in to finish the carving on Stone Mountain; Spiro Agnew dedicated it on May 9, 1970. (Nixon was supposed to, but the ceremony took place the weekend after the Kent State shootings.)

In the 1970s the Confederate flag came into use not just in the South, where white Americans opposed desegregation; it also came into use in the North and West, where young white Americans opposed the actions of the federal government in Vietnam. The Watergate scandal just confirmed young people’s distaste for the government. So racism became wedded to opposition to the federal government. As the Confederate flag took off as a cultural symbol in the 1970s, both of those impulses grew stronger.

By 1980, the flag had stopped being a historical relic and had become a potent modern symbol for people who opposed the efforts of the federal government to improve the lives of African-Americans and other people left behind in American society. Opponents insisted that the government must not promote social justice or social welfare legislation, because that sort of legislation was simply, they insisted, a redistribution of tax dollars from hardworking white people to lazy African-Americans. White supremacy became the lever to destroy an active government that works for the good of all Americans in order to replace it with one that operates for the good of a very few people, almost always white men. It was this equation that gave us Ronald Reagan’s “welfare queen,” George Bush’s “Willie Horton,” and Mitt Romney’s “47 percent.” White supremacy and Movement Conservatism reinforce each other.

For decades, Americans have watched advocates of small government gut social welfare legislation and justify their attacks by accusing their opponents of wanting handouts. Those cuts have badly hurt America’s women, minorities and poorer citizens. But the narrative that justified the attacks on government was hard to combat because it was so slippery. Victories against it were minor. In 2000, protesters got the Confederate flag removed from above the Statehouse, but it stayed on state property, in front of the building itself.

The moment has changed, and suddenly the Confederate flag has become a lightning rod for opposition not just to racism, but to the small government ideology it represents. Finally, unexpectedly, there is a physical symbol of opposition to the federal government that people can actually see, and join together to tear down. In the past, supporters of the Confederate flag could argue that it was simply a symbol of their heritage and that anyone who disliked it was victimizing them. When Dylann Roof murdered nine African-Americans and tied his actions to that flag, he exposed that rationalization for the lie it had always been.

At long last, this may be the moment when the American people take back their government from those who are trying, as Grover Norquist put it, to “drown it in a bathtub.” This may be the moment at which America begins to move back to the center after a 30-year rightward tilt.

A number of people have insisted that nothing could replace the Confederate flag as a symbol of Southern heritage, In face, we have a lovely flag that could replace it, one with 13 red and white stripes and 50 stars on a blue background. This would be an excellent standard to replace the one around which the people who tried to destroy the government of this country, first in the 1860s and then a century later, have rallied.