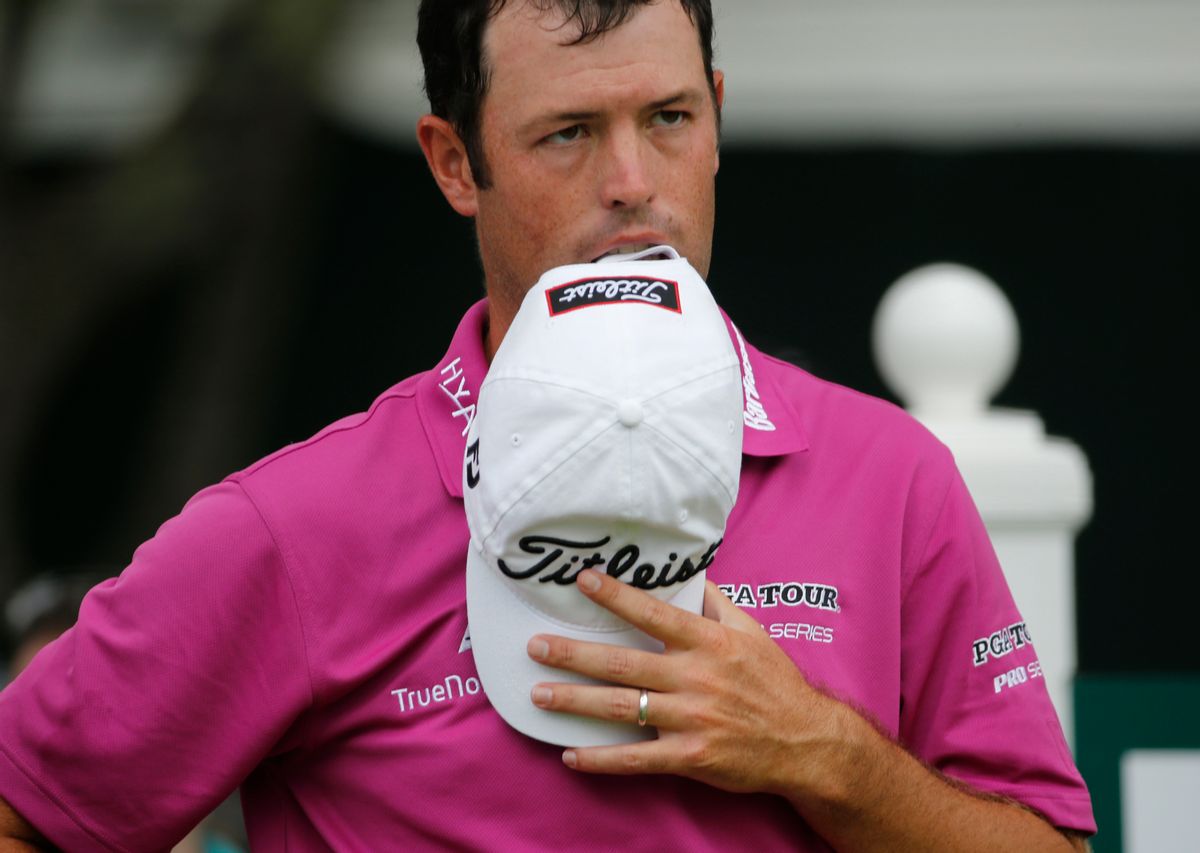 Robert Streb takes a bite out of his hat as he waits to hit on the 18th tee during the final round of the Greenbrier Classic golf tournament at the Greenbrier Resort in White Sulphur Springs, W.Va., Sunday, July 5, 2015. Streb broke his putter earlier in the round and was not allowed to replace it. Streb finished at 13-under and made it to the first playoff hole. (AP Photo/Steve Helber) (AP)
--

WHITE SULPHUR SPRINGS, W.Va. (AP) — A week ago at the Travelers Championship, Danny Lee became so disappointed with his driver that he gave it to a young fan in the middle of the final round and walked away.

On Sunday, his new one worked pretty well.

Nearly eight years after becoming a U.S. Amateur champion at age 18, Lee earned his first PGA Tour win at The Greenbrier Classic in a four-man playoff.

Lee won in his 98th tour event when he parred the second hole of Sunday's sudden-death playoff, eliminating David Hearn after Kevin Kisner and Robert Streb faltered on the first playoff hole.

"I kind of felt like I was playing good but not good enough to win a golf tournament," Lee said. "But this week for some reason I just felt right. I was hitting my driver really good, my irons really good."

Lee, Hearn, Kisner and Streb were tied at 13-under par after four rounds on the Old White TPC course. And Lee admits he suddenly became nervous.

"My head was blank, and I was just trying to breathe," he said.

For good measure, Lee said his caddie, Kurt Kowaluk, put the piece of paper indicating his playoff starting position into a mock wishing well on the par-3 18th tee.

By then, Lee had his focus back.

"I felt ready," he said. "I felt like I could really win this thing."

The South Korean-born New Zealander earned $1.2 million and became the ninth first-time winner on the tour this season. He jumped from 57th to 15th in this week's FedEx Cup points race.

Lee, Hearn, James Hahn and Greg Owen earned spots in next week's British Open at St. Andrews. There also were four Open spots handed out a week ago at the Travelers Championship and one more is available this week at the John Deere Classic.

Lee was competing in his 27th event this season, including his eighth in nine weeks. He is trying to qualify for the international team for the Presidents Cup in October in South Korea. He was 16th in the standings after The Greenbrier Classic.

"I never get tired of playing golf," Lee said. "I mean, it's my job, and I just love doing it, and I'm just happy to be out here every week."

Streb shot 65 by making five birdie putts on the back nine with a 56-degree wedge after breaking his putter on the ninth hole when he tossed it at his bag next to the green.

"It hit the bottom of the bag and the (putter) head went flying," Streb said. "It was not my intent, but that was what happened. And so I said, well, let's see what we can do with a wedge."

Streb was allowed a replacement putter for the playoff, but he never got to use it after missing the green.

Lee and Hearn made birdie putts on the first playoff hole, also eliminating Kisner, who lost in a playoff for the third time this season.

On the second playoff hole, Hearn drove behind a tree on No. 17 and made bogey.

"That was probably the only bad tee shot I hit all day," said Hearn, still looking for his first PGA Tour win in 164 events. "I've just got to keep giving myself chances like this, and it's going to happen soon."

Lee also missed the fairway, but reached the green in three shots and two-putted from across the green for par.

It marked the third playoff in the tournament's six-year history and was the 14th on the PGA Tour this season.

Russell Henley shot 63 and finished fifth at 12 under.

Tiger Woods started the day seven shots behind the leaders, shot a bogey-free 67 and said he made some "nice strides" heading into the British Open.

"Best I've hit it in a long, long, long time," Woods said. "I had full control over all clubs. This could have been one of those special rounds."

Woods broke a streak of 55 consecutive rounds with at least one bogey. It was his first time under par in a final round since the 2013 Tour Championship.