My son, a bong and the Snapchat shot that led to a parenting crisis

The other moms were furious about the pot, but I was furious someone's kid had been so careless about social media 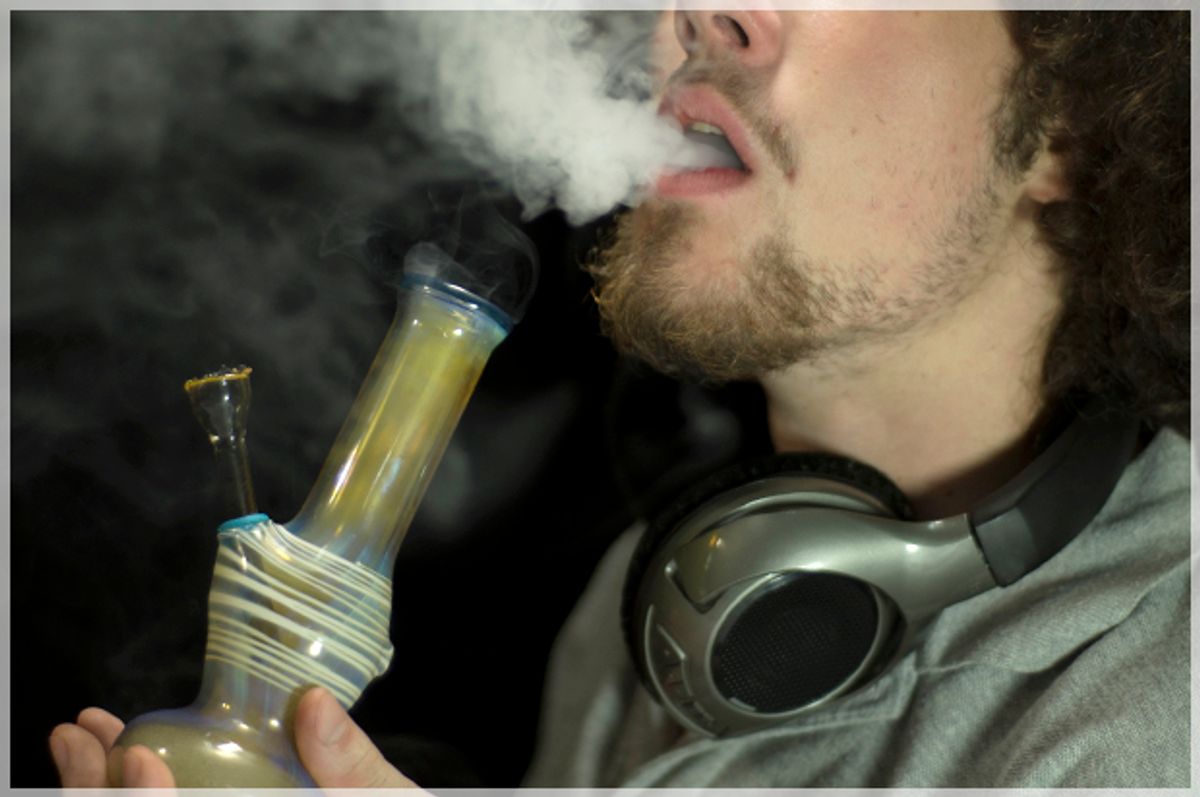 I was in my office in Philadelphia when my phone signaled a text. It was from a mom in my neighborhood and she said, “I’m about to send you a photo that is upsetting, but I’d want to see it if I were you.”

I palmed my phone and stared at the screen until it arrived: a photo of my just-turned-16-year-old son, inhaling from a bong. A row of emoticons were across the top of the image, the tell-tale sign this photo had come from Snapchat.

I wanted to write back, “WTF?” I wanted to yell those words — no acronym, the full expression — in my empty office, listening to the words echo down the hall.

Instead, I stared at the phone and wondered WTF to say.

But I was in a conundrum. I had another mother who knew I knew my son was smoking (Live! Real time!) and she was watching. She and I had long ago agreed to disagree about pot and alcohol. She has a zero-tolerance philosophy, and that’s fine. I understand her need to sniff her teenage son alongside their lab retriever every time he comes home, but I want the same respect for my philosophy of transparency. Christopher is the youngest of three kids who have talked to me about tiny and big choices, sometimes before, and sometimes after they make them. I try to walk the line between guiding and staying out of their way. I want to be the ramp agent, the guy with the orange flags on the tarmac guiding the plane, not the one flying it. But now my role as a parent, how I was going to handle this, had become public, too. I had another mother waiting for my next move. I felt exposed in my little windowless, cinderblock office. Our screens are also cameras, and it felt as though the Internet itself were watching and saying, “Oh yeah? Parent this.”

I actually wasn’t that concerned about the pot. It was summer. He was 16. I was more concerned about why this act was being posted on social media. This incident was, to me, one of the worst kinds of oversharing. I thought teenage acts of rebellion were meant to be clandestine and that getting away with it was part of the fun and excitement.  But maybe broadcasting breaking the rules is the new normal.

I’d talked to my kids about exactly all of this: windows work both ways; once something is digital it’s easily captured. Even at our local high school, they warned the kids about taking nude selfies for their boyfriends and girlfriends: “Your boyfriend may be too proud of you not to share it.” Smart phrasing to stop a dumb move.

The boy who posted the picture has a history of being the veritable reporter of extracurricular activities in our small town. Anyone who “follows” him on several formats gets a play-by-play of prom weekend shenanigans, from fights to hookups. Except, of course, his own parents. I guess they think social media is just for kids.

The decision to look at your kid’s phone or not is another of those parenting land mines. Whenever I take my son’s cellphone, I throw it in my nightstand drawer and leave it at home. The mother I’ll call Deb — the one who texted me the picture of the bong that day — makes other choices. When she has her son’s cellphone, she keeps it face-up on her desk so she can see notifications as they come in. That’s how she saw the image on Snapchat. She was savvy enough to immediately take a screenshot, and then send it to me.

I texted Chris and said, “Go home.” I wanted him out of that backyard that suddenly seemed dangerous and scary to me, even though it was a beautiful July day. Then I texted Deb (who had been incessantly texting me for my reaction since she’d sent the image) and told her the same. “I just told Chris to get home. I will deal with him after work.”

The texts didn’t stop. Chris, of course, wanted to know why I was telling him to go home at 2 p.m. Deb kept her questions and opinions flying at me as well. I rolled away from my desk and tried to think.

I sent the photo to our family. I don’t really know why I did this. Maybe I didn’t want to be the only one who knew this was happening. Maybe I wanted to see just how easy it was to share and share and share. I immediately followed it with a group message so that they wouldn’t add to the pile of people currently blowing up my phone. “Don’t know what to do. Processing. See you at dinner.”

Later, after the boys had been picked up, I got a call from the poster’s mother, a woman I’ll call Samantha. “I just want you to know that he’s punished, but he feels really bad, he feels really, really bad. I sent him to his room and he’s probably up there crying.”

Samantha’s compulsion to tell me that she was properly punishing her child was far more compelling to me than her need to tell me that her kid was remorseful. She was protecting my perception of her parenting skills. Her son was the one who shared the image and I found myself saying things like, “It’s OK.” “I’m not going to harbor anger over this.” But mostly I kept repeating, “Just tell him not to share things like this on social media. Tell him no forum is safe.”

She and I saw the problem quite differently. She kept talking about the smoking itself, casting about for other parents to blame or bring in to the situation, whether the parents whose backyard it was knew that kids smoke there, when they’d be home. When she asked me if this was the first I learned that Chris smoked, I almost laughed: She just couldn’t get it straight that, to me, the sharing of the bong image was more potentially detrimental than the bong itself. Our approach and perception to this situation were almost oppositional, and yet we had been brought together by the same clear image distributed by the same method.

The Internet has changed how we do everything: from communication to shopping to grieving -- of course parenting has been changed by the Internet, too. We’ve got Mommy bloggers and breast-feeding boards and discipline forums. We’re monitoring our kids’ behaviors as well as everyone else's. This situation simply couldn’t have happened 15 years ago. Parent this.

When I got home, Chris’ mood was somber, as was the rest of the family’s. It was almost like we had been through something — an accident, a close call. And then Chris told me: After being sent to his room, the boy who had posted the pot picture immediately went on Facebook and unleashed his rage over the shared Snapchat image. He was calling Deb, the mother who busted him, every curse word he ever heard and making up new ones.

All afternoon, I had been telling myself: At least the kids had all learned a lesson. This photo had only been shared with three mothers. But what if Deb “had it in” for me, or my son, and shared it with the principal, sports coaches, (maybe one day) his employer? This image (hopefully) stopped at the sharing among my own family. But what if it hadn’t? It could have gone as viral as Britney Spears' inadvertent crotch shot limo exit, Weiner’s tighty whities. If the circumstances were different, one image could change a person’s life. I thought the boys had realized Snapchat was meaningless insofar as privacy, but now I saw how an image that was supposed to “live” for 10 seconds had proven to have a much longer shelf life.

When kids are babies they change every day. Just as soon as you think you have their habits and a schedule down, they change. Now, technology is changing just as quickly, and it’s even trickier to navigate. Parents are friend-requesting other parents when their kids start to date or hang out. That’s our new normal: cyber-stalk potential employees, house painters, doctors, dates, and yes, even parents of kids our kids want to spend time with. Parents are intercepting sexts, monitoring their kids’ behavior while they’re away at college, monitoring each other. It’s easy, it’s free, and … it’s sneaky. We have to stop and think: Just because we can be up in each other’s business, does that mean we should be?

Of course I wanted to call Samantha and tell her that her son didn’t get it, and to take his damn laptop, too, but I didn’t. It would be like trying to stuff trash into an already overloaded can. This whole situation was bad enough, and this part was not my business; it was neither my son nor me who was getting defamed. But I did worry. I did want to continue to talk about it, which is what inspired me to write this. I know it’s a risk to share this story about my own son, but the ethical crisis of all the interwoven threads is not uncommon, and I think we need to talk about it. At the very least, I needed to talk about it with my son.

That night, I had a long talk with Chris about privacy, choices, the Internet and lots and lots about the worst kind of over-sharing. I told him he had to stay in the rest of the week; I felt like I had to do something. I didn’t take his phone, because what I really wanted to do was take everyone’s phone, and shut down Snapchat, and Facebook, and Instagram -- the whole damn Internet. All I had left was option B. To give him this age-old adage: Be safe.