No, the Bible doesn't say anything about gay marriage: A history lesson for the Christian right 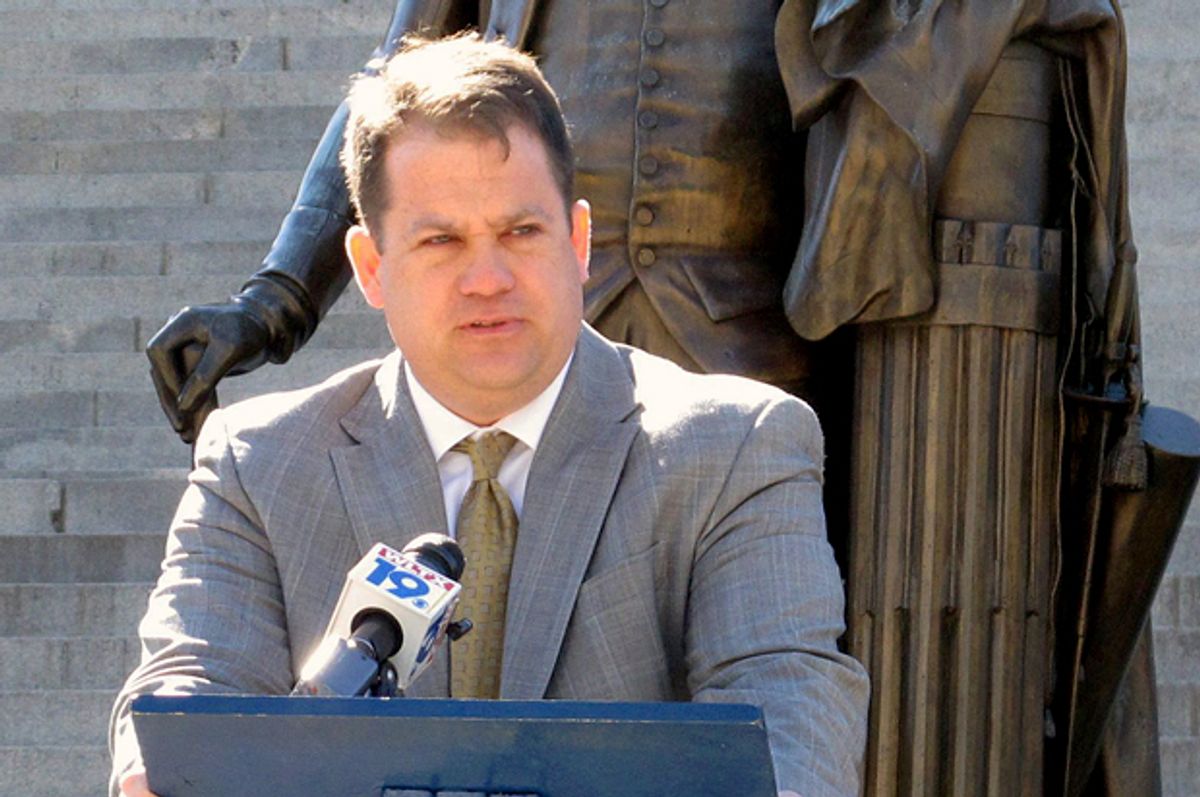 The best thing I can say about Republican South Carolina state senator Lee Bright is that his floor speech Monday provided what could very well be the perfect self-contained illustration of everything that's backwards and archaic about the modern conservative movement. It's really a museum-worthy piece of religious zealotry and anti-gay bigotry mixed with just enough fire-and-brimstone to make it really, really special. In fact, children of the future will some day visit a museum adjacent to the Mall in Washington, DC, where they’ll find one of many kiosks about equality. Under block text on the wall reading, "The abomination colors," there will be a small video monitor flanked by a big red button that, when pushed, replays Bright's floor speech, just to remind our posterity how screwy, unhinged and contra-history the Republicans were in 2015.

During a floor debate about the Confederate flag, Bright totally freaked out about, of all things, same-sex marriage -- lamenting how "five judges" sanctified "deviant behavior."

Among other things, Bright blurted:

By the way, this is how twisted South Carolina law is: The only way to permanently remove the Confederate flag from the grounds of the Capitol is by a two-thirds majority in both chambers of the legislature. In any other sane governing body, two-thirds majorities are reserved for overriding vetoes or for passing constitutional amendments. That's how sacred the flag is in Bright's South Carolina -- banning it requires clearing the two-thirds hurdle.

But back to Bright, and specifically his line: "One nation gone under."

First, clever! Second, here we are again with this nonsense about how same-sex marriage will destroy America somehow. Take a second to absorb this: There are politicians up and down the ladder who seriously believe that gay marriage will not only precipitate hurricanes and droughts (yet man-made climate change is evidently a hoax), but they also believe that marriages within the relatively minuscule LGBT demographic will lead to fewer births and therefore the slow dwindling of the human population until -- POOF! -- extinction. They really believe this, and if they don't, they cynically expect their ignorant supporters to buy it. They might as well be saying that cancer is caused by an imbalance of bodily humors and "tired blood" requiring a tincture of opiates. It's old-timey gobbledeegook.

"We can rally together and talk about a flag all we want, but the devil is taking control of this land and we’re not stopping him!"

That's right, an elected state politician believes there's a real-life character called "the devil." Furthermore, this devil character is running around legalizing gay marriage. Not only that, but Bright thinks we should stop him -- him being "the devil."

Christ didn't say a damn thing about "the homosexual." Nothing. There's no quote or parable anywhere in the Bible in which Jesus addresses "the homosexual." I'm agnostic, and it's been a long time since I was a practicing Catholic, and even I know this. Bright claims to be a devout Christian and he doesn't know.

"I watch the White House be lit up in the abomination colors! It is time for the church to rise up... Romans Chapter 1 is clear, the Bible is clear. This nation was founded on Judeo-Christian principles and they are under assault by men in black robes who were not elected by you."

Nit-picky correction: There were only two men in black robes who decided in favor of same-sex marriage. The other three black robes were occupied by women. Also, let's just skip right past how rainbow colors are "abomination colors" and debunk this "Romans Chapter 1" gibberish once and for all.

Context is really the key to understanding when and to whom Paul was writing in Romans, and it’s too often conveniently ignored or not discussed by Bright and his fellow paleoconservatives.

Ask any classics scholar and they’ll describe a very different sexual climate dating back 1,600 to 3,200 years. Primarily, the terms "homosexuality" and "same-sex marriage" are anachronistic in the ancient world, making it impossible for both biblical Testaments to explicitly condemn either term as we know it today.

Sexuality among the ancients was, in a word, complex and applying modern definitions to it is simply ignorant. Sexual intercourse with the same sex and/or the opposite sex was commonplace in rituals, priestly classes and displays of power, and same-sex intercourse even in the era of Paul was considered typical, though not necessarily endorsed. "Greek Religion" by Walter Burkert describes sexual intercourse as part of a complicated tapestry of the religious practices of the ancients. But there simply wasn’t an understood category of person defined as "gay," there was instead merely a recognized means of having sex that involved two men.

Paul and the early Christians, in establishing a separate religion, lumped discussions of all forms of same- or opposite-sex intercourse into the broader goal of converting idolaters to Christianity. Paul's letters to the Romans, as well as the Ephesians, Corinthians, Colossians and so forth, were really recruitment pamphlets to pagan gentiles instructing them how to reject their old idol-worshiping religion and to learn how to live simple lifestyles as a means of joining the Christian faith and therefore being accepted into Heaven. Since various forms of "fornication" were often involved in pagan rituals, and Christianity obviously rejected the pagan gods and the manner in which they were worshiped, it stands to reason same-sex intercourse would be included in a series of recommendations -- and it’s included along with all other forms of pagan worship and lifestyle. (Pagan sexual rituals 2,000 years ago can’t be rationally compared in any way with loving same-sex couples of today.)

Simply put: Paul was saying that if you want to be a Christian, you can't worship those other gods by doing X, Y and Z, including the sexual rituals. That’s it.

As with Levitical law, Paul’s instructions were manifold and the passage about forbidding same-sex intercourse is actually one of the more minor recommendations. (If worshiping the goddess Athena had involved wearing gigantic novelty foam cowboy hats, Paul would've forbidden it.) Yet it’s constantly cherry-picked, while Paul’s other recommendations are ignored. It's doubtful that anti-gay business-owners are also turning away customers who don’t adhere to the lifestyles fully prescribed by St. Paul.

In Colossians 3:5, for example, Paul wrote, "Put to death therefore what is earthly in you: immorality, impurity, passion, evil desire, and covetousness, which is idolatry." He's talking about behaviors characteristic in pagan gentiles, but knowing that, should we write secular laws banning evil desires and general immorality? No way, chiefly because there are very few pagan Americans today. But anti-gay Christians need to take a long, hard look at the sheer breadth of specifically what the Bible condemns and, more importantly, why it condemns those things.

In the letter to the Romans that Bright name-dropped -- the letter in which Paul famously wrote that male-male intercourse was "unseemly," he also scolded those who engage in "unrighteousness, fornication, wickedness, covetousness, maliciousness," anyone who is "full of envy, murder, debate, deceit, malignity; whisperers, backbiters, haters of God, spiteful, proud, boasters, inventors of evil things, disobedient to parents, without understanding, covenant breakers, without natural affection, implacable," and the "unmerciful." If Paul authorizes Christian caterers to refuse service to gay couples, then I’m not sure how those caterers will stay in business while turning away customers who do all of those other things, too. Along those lines, Paul told the Ephesians, "And do not get drunk with wine, for that is debauchery." So, no weddings that might have drunken guests, either. That’d pretty much be all weddings, really.

Simply put: Lee Bright, Mike Huckabee, Pat Robertson, Ted Cruz, Sean Hannity and all the others don't know their own Bible. They don't understand the history of their religion. But if they were seriously the Christians they claim to be, then they should own it. All of it. And if they're unwilling to ban everything from "debate" to "envy" to drinking wine while also engaging in their pious effort to ban same-sex marriage, then they need to shut the hell up and, instead, spend a little more quality time with this book they insist ought to be crow-barred into our secular laws. They might actually learn something, though I doubt the will.