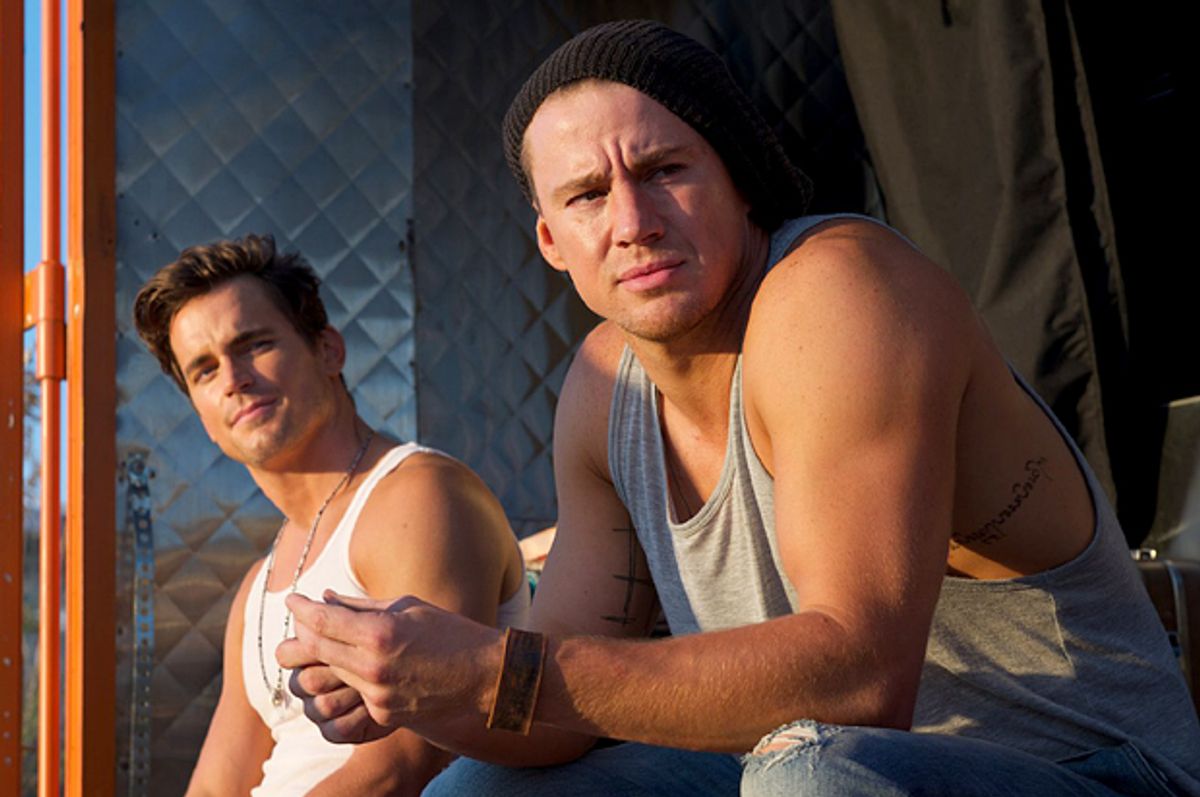 I’ll admit it: I was one of those women that saw “Magic Mike XXL” the night it came out with a friend, and our expectations weren’t that high. The movie could’ve been played on mute for all we cared — Channing Tatum and friends didn’t disappoint. (I felt like Porky Pig during the final dance scene -- biddee biddee biddee!) What did surprise me, however, was that “Magic Mike XXL” lays bare some very real fears.

Initially I thought the film would be a bro-centric road trip, a celebration of the Kings of Tampa continuing to avoid growing up -- Peter Pan and the Lost Boys with pecs and choreography. “Magic Mike XXL” seemed at first to represent male dread — of maturing, of aging, of eventually not living up to the fantasy they project. But the male characters in the movie are all afraid of one F-word in particular — failure.

“Failure” is a dirty word in our culture, more off-putting than death in some cases. As ambitious Americans, we’re taught not to accept it. If failure seems imminent, we’re socialized to avoid it — or at least avoid admitting it — at all costs. But "Magic Mike XXL" doesn't shy away from it — the movie embraces failure as one of its central themes.

Mike’s love interest from the first film, Brooke, left him after he traded in his nights as a male entertainer to pursue his dream of starting his own furniture company. By all accounts, he took the right steps and made the right moves, but practically to no avail — he lost the girl and his company was struggling to get off the ground. A blow like that is understandably a kick to the ego.

The movie also stripped down the regrets of the oldest of the entertainers, Tarzan, who said that he’d trade anything to have had a family instead. Ken admits being jealous of Mike who, at one time, seemed to have it all, before revealing his own relationship’s demise, coupled with a struggling acting career. Newcomer Andre, played by ever-charming Donald Glover, struggles to make it in the volatile world of today’s music industry amidst the challenges of exposure and social media.

Each male entertainer is faced with a fear of failure, and resorts to falling back on their bodies for validation, which creates an interesting contrast between physical perfection and meaningful success. They’re validated and compensated each night with a little bump and grind from the women slinging dollar bills in their direction, but face a nearly inescapable sense of ennui during the day.

Perceptions of physical perfection have shifted within the last few years as fashion and media have slowly become more inclusive to feature models who aren't size 0 white cis-gender women. Now, we can thank the rise of the dad bod for shifting the conversation to include men, too. I won’t pretend to know the pressures that men face when it comes to achieving a certain physical ideal, but I can understand a distinct degree of anxiety when it comes to meeting a certain aesthetic standard. It’s an unfortunate and unnecessary burden we carry, that pursuit of physical perfection.

But “Magic Mike XXL” showcases a male vulnerability that has nothing to do with physical exposure. So many movies about men fall along two extreme ideals: hyper-violent action hero adventures or bro-comedies celebrating a perpetual adolescence. We’re used to stories about women who are trying to find themselves while juggling careers, families and individual identities. It's easy to forget that men also feel the same pressures, and that having a perfectly-sculpted body — and a job flaunting it — doesn't mean your life is perfect, too.