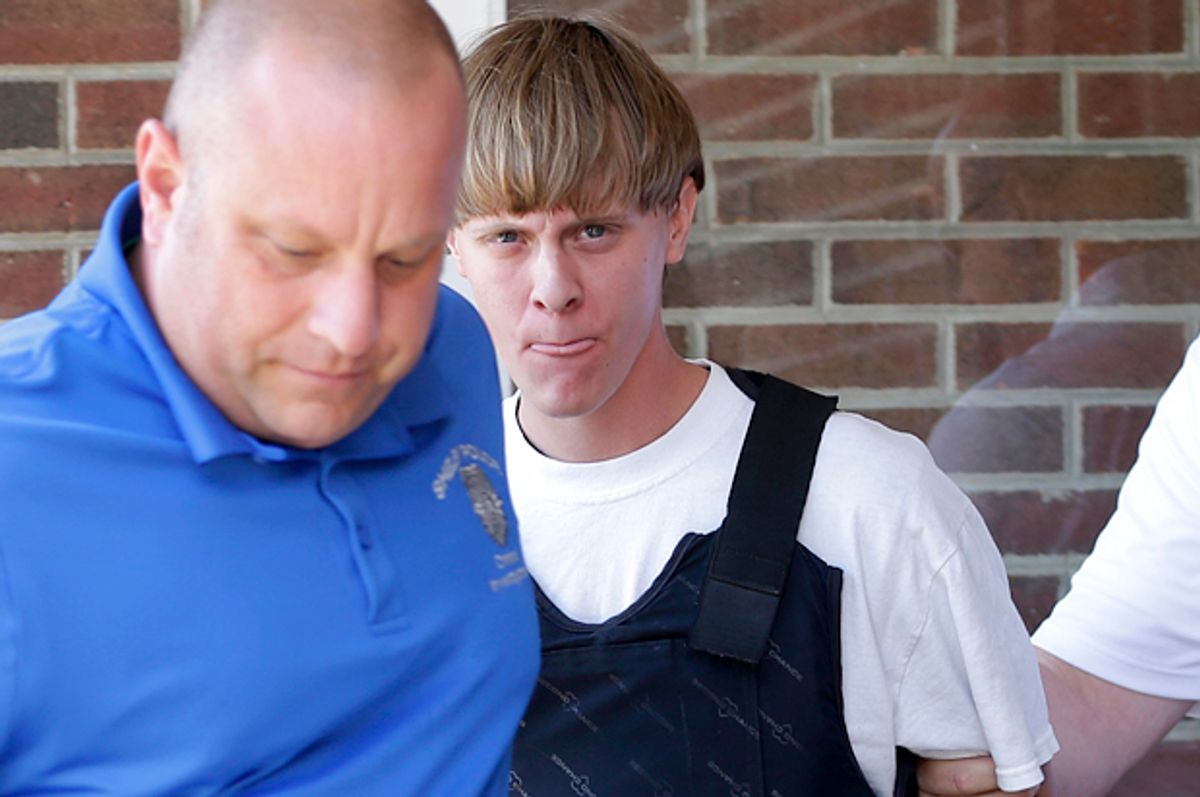 Dylann Roof was not silent before he murdered nine black people in their church, shooting and reloading multiple times, destroying their bodies with his white rage. He did not shout obscure or difficult to translate Latin phrases. Dylann Roof was not a blank slate or deep and nebulous well who left no written justification or explanation for his evil deeds. White racial terrorist Dylann Roof told his African-American victims why he was going to kill them. As though it was a type of forced civic duty and obligation, Roof said to his victims: “I have to do it.” He then shared his grievances: “You rape our women and you’re taking over our country and you have to go.” Then he let off a fusillade of bullets.

A superficial reading would suggest that the “our” is simple to decipher: Roof is channeling his white nationalist understanding of “America” as a country synonymous with and exclusively for “white” people. This is the logic of the phrase that “America is a white man’s country.” The “our” also signifies the control and possession of white women’s bodies and personhood by white men.

The idea of black men raping white women is a centuries-old white American fantasy: It is the justification for the lynching tree, where thousands of innocent black men were made into “strange fruit.” The lynching tree also reinforces a cultural lie, that white women are the most desired among all others, and tries to conceal how many white women from both before the founding of the United States, through to the Age of Obama, willingly have had relationships with black men, a perfectly banal observation that nonetheless enrages white supremacists.

Nationalist and politically chauvinistic ideologies tend toward patriarchy and sexism. White nationalism is no exception. As such, Dylann Roof’s white racial terrorism is an act of violence, and one that is grounded in a particular understanding of gender: “Male” or “female” are designations of human, sexual, biological difference. “Masculine” and “feminine,” however, are social constructs that are not fixed, which change over time, and in response to particular arrangements of social and political power. Here, gender is a type of performance (in its most binary and simple form) as a given person acts “male” or “female.” And toxic masculinity is a performance that emphasizes violence, control over others, sexual aggression and a lack of emotion and vulnerability. Dylann Roof—with the guns, violence, resentment, right-wing politics and racism—is the extreme embodiment of toxic white masculinity.

The color line is not separate from gender: The two are deeply connected to one another in the United States and the West more broadly. Dylann Roof’s performance of gender involved an understanding that he should have power over and was inherently superior to people of color because of his skin color. Moreover, as understood by his racist political ideology, Dylann Roof was granted an additional claim on power and authority because he is a man. Roof's racism and sexism thus intersect in what philosophers Carol Pateman and Charles Mills have described as “racial patriarchy.” This is a system of racial domination in which people of color are subordinate to whites. It is also a relationship where white men have more power than white women. But all white people have a higher place than any person of color—either male or female. Women of color occupy the basement level of a society organized around a system of racial patriarchy.

This system, in its most unapologetic and honest form, is the dream of white nationalists.

But while tethered to ideals of the past, white nationalism also lives in the present; thus, it must deal with and negotiate questions about feminism, immigration, cosmopolitanism, globalization and other related matters if it is to remain viable as a community and belief system. Consequently, white nationalism has its own type of “gender troubles.” Can one be a feminist and also a white nationalist? Are white men and white women equal because they are both “white”? Should white women be subordinate to white men? These are the types of questions that white nationalists have been debating with one another online and in other spaces. Dylann Roof’s manifesto demonstrates knowledge, however superficial, of these various currents and controversies in contemporary white nationalist “political thought.”

These discussions of racial patriarchy among white supremacists are not new; Nancy Maclean explored the Ku Klux Klan’s struggles with questions of gender in the first part of the early 20th century in her book "Behind the Mask of Chivalry":

Klan tracts and speakers dwelt far less on men’s behavior than on women’s. This was in part because male roles were changing less than female roles, and in part because Klansmen were more interested in controlling others than in self-scrutiny. Nevertheless, they expounded a particular model of masculinity. Klansmen expected women to marry, to provide for their families, and to exercise control over their wives and children. “God intended,” affirmed one Klan minister, “that every man should possess insofar as possible, his own home and rule his own household.”

Rule over one’s women was mandated by another staple of the Klan’s conception of masculinity: “honor,” or, as it was sometimes called, “chivalry.” Honor dictated a commitment to protect the virtue of “American” women. Historically honor in fact rested on a man’s ability to control the sexuality of his female relations…

Although hostile to sexual emancipation, the Klan was not an outright foe of all women’s equality. The order’s commitment to moral uplift in fact led it to support rights for white Protestant women…Nonetheless, recognition of women by Klansmen was always shot through with ambivalence. Klansmen’s ideal, after all, was the nineteenth-century petty proprietor—whether farmer, artisan, or merchant. His vaunted independence as a citizen presumed his control over the labor and behavior of the dependents in his household. However much Klansmen might try to cooperate with women who shared their social goals, female initiative set them on edge; the undertow of patriarchal prerogative impeded full solidarity.

Dylann Roof was attracted to white nationalism and white supremacy because of a sense of alienation and anger at the world. Although he was born middle class, Roof somehow came to feel that America -- because of immigration, changing demographics and pernicious fictions about “black crime” -- had abandoned him. In Roof’s mind, he was forced into action, to be “heroic,” “the Last Rhodesian,” launching an attack on unarmed black people.

Roof’s actions were those of the “angry white man” on steroids. While his feelings of toxic white masculinity could have been insulated by the relative privileges of being born into the middle class, he was instead suckered into a sense of white racial victimology, entitlement and identity politics by the right-wing media and online racist propaganda. Never did he think to identify the system he venerated, racial patriarchy, as the source of his own alienation. Instead, like so many other angry young men like him, he bought into it wholeheartedly. Roof’s translating this anger into violent action is (thankfully) a rare event in the United States. But, as sociologist Michael Kimmer detailed in his book “Angry White Men,” this sense of (white) grievance and anger is all too common.

Guns are central to toxic white masculinity, as well as the broader white supremacist and conservative politics that Dylann Roof exemplified. In the United States, guns have a deep historic relationship to the maintenance and enforcement of hierarchies of race, class and gender. They were a tool for committing mass genocide against First Nations peoples, for example. They were given to white indentured servants in the 17th century as a way of cementing their identities as “free” people who could then be used to oppress and control black slaves and other people of color. Guns have been a tool for American plutocrats and the 1 percent to control the working classes and the poor. The gun is also a powerful symbol of masculinity and virility: A recent ad campaign by the manufacturer of the AR-15 rifle featured a picture of the weapon along with the tag line: “Consider your man card reissued.”

As seen with Dylann Roof and other mass shooters (a group in which white males are grossly overrepresented) such as Elliot Rodger, Adam Lanza, the Columbine killers and James Holmes, toxic masculinity (and a sense of aggrieved white male entitlement) is central to their decision to use firearms to commit acts of mass murder.

And there most certainly will not be a “national conversation” about toxic white masculinity and mass murder in the mainstream news media.