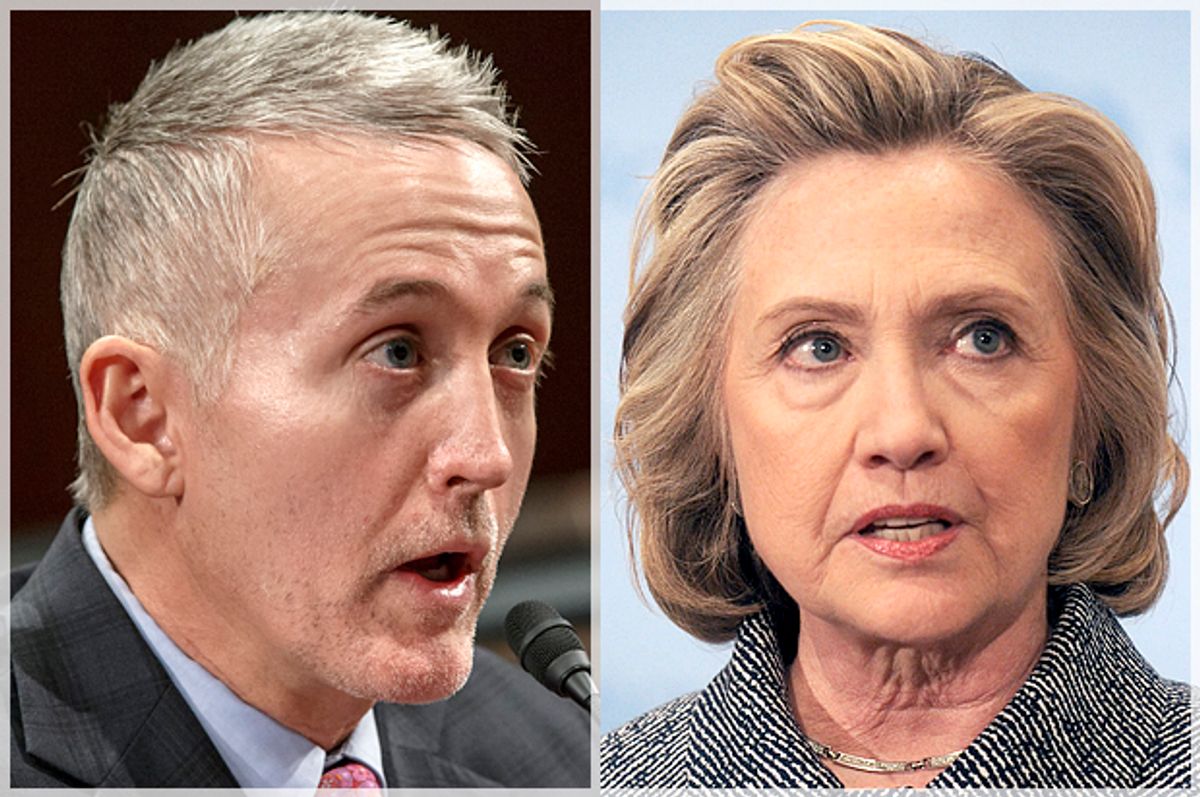 Back in May, the House Select Committee on Benghazi released an “Interim Progress Update” to apprise the public of what it had been up to in the year since House Republicans had voted it into existence. Over the course of that year, the committee had held just three public hearings (the last one was in January, and as of this writing no additional hearings are scheduled) none of which had revealed anything we didn’t already know about the September 2012 attacks. But committee chair Trey Gowdy assured the public that their tax dollars were being well-spent on a “serious investigation” that would not fall victim to the vulgar temptations of base politicking.

So while tremendous progress has been made, both in the quantity and quality of transcribed interviews, those interviews must remain private until such time as a final report has been written in fairness to both the conduct of a proper investigation and to all relevant parties. I have made this a fundamental principle for the Committee and its staff because serious investigations do not leak information or make selective releases of information without full and proper context.

“I pledged an investigation worthy of the sacrifice made by these men and worthy of the trust of my fellow citizens,” Gowdy wrote. “That remains my pledge.” That’s a high standard to set for oneself, and right now Trey Gowdy is failing to live up to it.

Before the interim report was released, Gowdy expanded the committee’s investigation beyond its original mandate to focus on former secretary of state and current presidential candidate Hillary Clinton’s email practices. As part of that expansion, he and his Republican colleagues spent hours interrogating longtime Clinton remora Sidney Blumenthal about his business practices in an effort to dig up damaging information on Hillary. And in mid-June, someone with knowledge of the committee’s work leaked information about emails between Clinton and Blumenthal to Politico, clearly intending to create some bad press about the target of the committee’s investigation.

That’s bad enough, given Gowdy’s insistence that leaks of this sort have no place in his “serious investigation.” But it gets worse. The Democrats on the committee pointed out yesterday in a letter to Gowdy that whoever leaked the information “fed Politico an inaccurate characterization of these emails.” Politico’s source mixed up email chains and wrongly claimed that Hillary had withheld an email that had actually been in the committee’s possession for months.

One would think that Gowdy wouldn’t stand for this sort of behavior, as it flagrantly violates the standard he set for integrity, and taints his credibility along with that of the overall inquiry. But Gowdy’s response, as reported by the Washington Post’s Erik Wemple, was to bite back at the Democrats on the committee and make excuses for the person who fed the bogus information to Politico.

Per Wemple, Gowdy argues that the fact that Politico’s article was corrected shortly after it was published cuts against accusations that a Republican source on the committee had deliberately fed bogus info to the publication. “The fact this news story was updated in short order is proof your claim is fallacious on its face,” he said. “If a ‘doctored’ email had been presented to the reporter, clearly the reporter would not have been so quick to make the change.” So, per Gowdy, it wasn’t malice on the part of the leaker, just garden-variety incompetence.

On top of that, Gowdy exonerates the leaker for making that error, laying blame for the screw-up on… wait for it… Hillary Clinton:

One thing that is crystal clear and perhaps contributed to your misapprehension of earlier emails is that Secretary Clinton did not turn over everything to the State Department. And perhaps even more troubling, she turned over portions of some exchanges without turning over the full exchange. This is precisely the kind of editing and self-selection that could lead an observer to confuse which emails she pushed to the White House and which ones she merely pushed to her senior advisors.

With that statement, Gowdy sent a message to the staff of his “serious investigation” that not only will leaks be tolerated, but you don’t even have to be accurate in your leaking. Just feed reporters whatever and if it comes out later that you were wrong, no big deal! The boss will just shift blame to the person who is the target of the leak.

Remember, this committee was established to investigate the circumstances that led to the deaths of four Americans. Gowdy assumed leadership of the committee and promised to conduct its affairs in a respectful, no-nonsense fashion. Right now it’s consumed with political nonsense and far afield from its original purpose, and it’s all Trey Gowdy’s fault.