Advertising that (literally) gets under your skin: Latest "Girl With the Dragon Tattoo" promo scheme wants to make you a permanent billboard 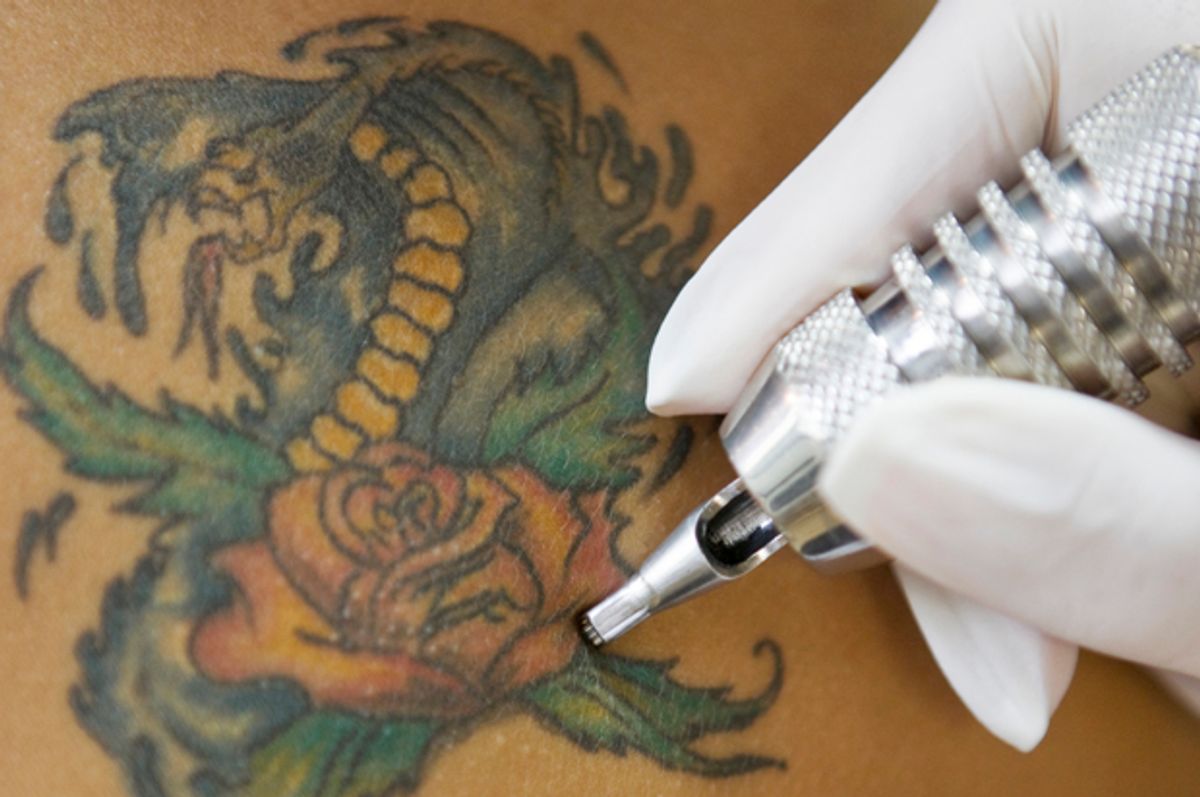 Two of my least favorite 21st century trends just came together in a particularly sickening way. And to make me even more confused, it’s all in the service of something I was, for a while, really looking forward to: the new novel in the Millennium series, which started out with Stieg Larsson’s “The Girl With the Dragon Tattoo.”

“THE GIRL IS BACK,” an online ad from the novel’s Australian publisher tells us of “The Girl in the Spider’s Web.” If you’d like to be part of the magic, all you need to do is donate your actual, er, back for an enormous tattoo. "We want your back for a national Tatvertising campaign," the site says. (Tatvertising.) "If you can handle it, just like Lisbeth Salander, register your details and tell us briefly why you’d like to be considered."

Of course, it’s just another step in the way companies have tried to “brand” themselves in places they didn’t used to go. In the ‘80s logos showed up en masse on clothes, especially hats and shoes and T-shirts. It’s hard to remember now, but people weren’t always walking corporate billboards. These days, you can’t go to a sporting event or a bar without seeing a ton of brand names on every surface. Cars used to have simple, low-key hood ornaments; these days, corporate messaging can take up the entire side of a sedan.

And then, like something out of Kafka’s Penal Colony, corporate imagery got even more intimate. From The Verge, tracking the "Dragon Tattoo" story:

In the early aughts, websites with tons of cash but little brand recognition anted up for the choice advertising real estate on human beings' faces. If you skim through the pictures for even a second it's obvious how predatory the practice is towards the poor and the desperate — including one woman who had GoldenPalace.com tattooed on her forehead in exchange for $10,000 that she needed to finance her son's education. This was no small thing — a company called TatAd.com even sprung up to help brands coordinate with flesh donors — but the practice either petered out or stopped warranting attention after five years or so.

The thing that makes this particularly unpleasant, then, is not that it shows the creeping of corporations and advertising closer and closer to us – our very skin. It’s that despite the fact that this lucky winner will have to spent eight hours getting a permanent tattoo on her back helping a publisher make money on a book launch, she does not appear to be getting paid for her marketing efforts.  The Verge, again:

But why the fuck does it need to be a real tattoo? When reached for comment, a representative from Razor & JOY, the advertising agency in charge of the campaign, told me, "The character of Lisbeth doesn't do things in half measures — and so we wanted our marketing to capture this passion." The representative also explained that the compensation for the woman who is cast would be something... less than monetary: "This campaign is an opportunity to give a truly passionate fan a free tattoo that is unique to a strong literary character." And a new type of degrading, unpaid labor in the publishing industry was born.

Hasn’t Hachette – a publisher a lot of literary people were championing when it went up against Amazon – heard of the don’t-work-for-free movement, which was motivated by just this kind of nonsense?

The original Millenium books arrived with a great deal of good will. The fourth one – by David Lagercrantz, a one-time Swedish crime reporter, with the blessing of the Larsson estate but not of the Larsson’s longtime partner, Eva Gabrielsson, who has called the new writer “a completely idiotic choice” – is announcing itself in a very different way. Let’s just hope the novel is better than this, and that the women of Australia keep their skin to themselves.

Advertising Books Tattoos The Girl With The Dragon Tattoo