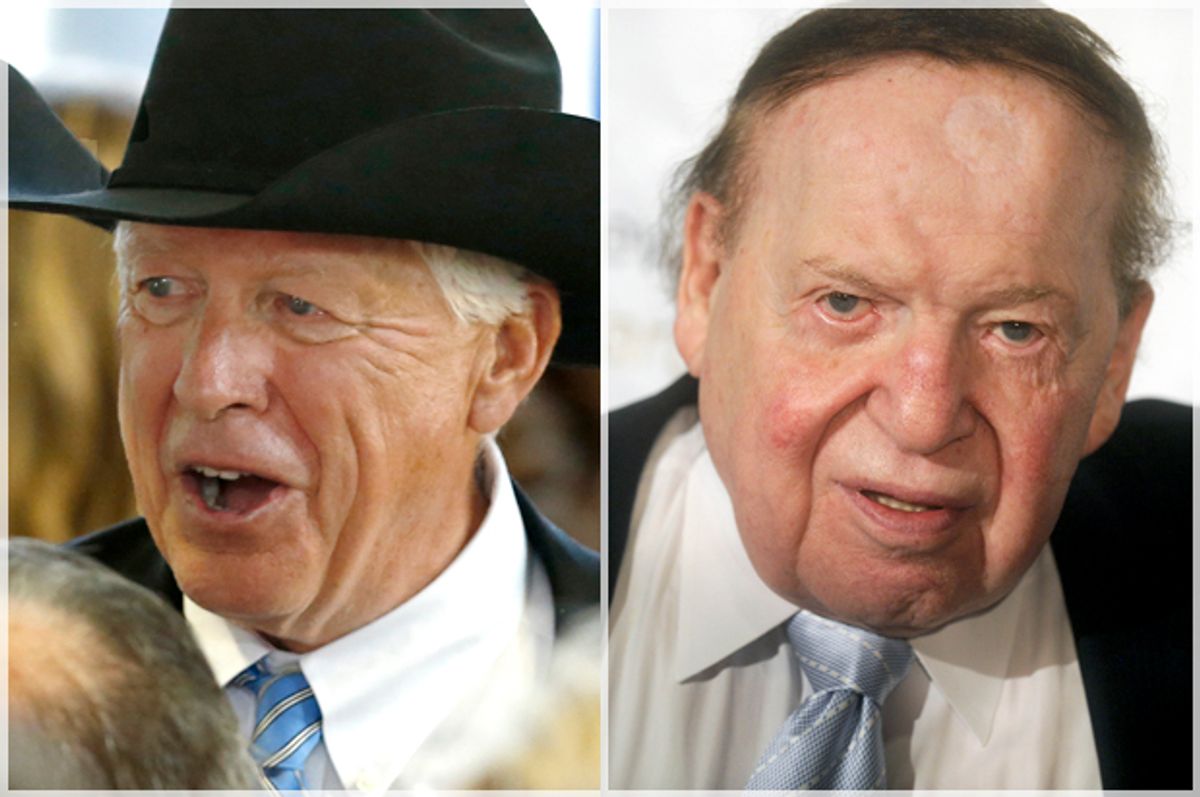 According to a recent batch of polling from the New York Times and CBS, hating the Supreme Court’s Citizens United decision is one of the precious few things on which nearly all Americans — Republicans, Democrats, conservatives and liberals — can agree. For example, a whopping 84 percent of Americans believe money has “too much” influence over political campaigns; and while you’d expect to hear that sentiment from Democrats, no fewer than 80 percent of Republicans agree. In our increasingly polarized era, you don’t see unanimity like that very often.

Now, in an ideal representative democracy, that kind of clear and overwhelming majority would lead to some legislative responses. And they wouldn’t be symbolic ones; they’d have real teeth. Since the United States is most certainly not an ideal representative democracy, however, that hasn’t happened. Yes, there have been some great state-level campaigns to try to stem the tide of plutocracy. But the reaction from Washington, D.C., has been muted. From all indications, in fact, the Supreme Court’s preference is to make the mess it made with Citizens United somehow even worse.

In short, the principle of democracy does not appear to be especially inspiring to many of America’s most powerful operators. But while elite fear and distrust of the masses is nothing new, what’s becoming increasingly clear, as the 2016 presidential campaign lumbers on, is that this honoring of democracy in the breach is being normalized. And I’m not just talking about the way the media has made mega-donors like Sheldon Adelson, the Koch brothers, and Foster Friess celebrities, either. The anti-democratic spirit now infects what is supposed to be the apotheosis of American democracy: the presidential race.

Actually, let me amend that somewhat. The Democratic Party is hardly a paragon of small-d democracy, overall, but in this regard the difference between it and the Republican Party is quite clear. Right now, most rank-and-file Democrats are eager to see Hillary Clinton and Sen. Bernie Sanders debate. And the general response from Democrats to the entrance of Martin O’Malley, Jim Webb and Lincoln Chafee into the campaign has either been positive, indifferent or, in Webb’s case, somewhat perplexed. On the Republican side, however, things are very different.

For one thing, ever since Mitt Romney lost in 2012 — in no small part because of nativist pandering — a chief goal of the GOP establishment has been to have fewer debates. In fact, at this point, giving voters fewer opportunities to hear from the men and women who would be their president is Republican National Committee chairman Reince Priebus’ primary legacy. Most Republicans seem to be OK with that, but a related attempt by party elites to restrict the number of debate participants has come in for criticism. (I should note, though, that the controversial proposal still allows for 10 debaters…which is a lot.)

Both of those decisions can be justified in pragmatic terms — especially if we keep in mind Republicans’ ironclad belief that a biased liberal media will always portray them negatively. Less defensible is an informal proposal being circled among elite GOP donors that encourages 2016 candidates not to argue with one another, if they can help it. According to the Associated Press, the visionary behind this idea is the aforementioned Friess, the backer of Rick Santorum who infamously recommended that women avoid unwanted pregnancies by holding aspirin between their knees. In fairness to Friess, he doesn’t explicitly request GOP candidates refrain from arguing; he only wants to be sure the campaign remains “civil.”

Yet as Elizabeth Stoker Bruenig has keenly noted, calling for more civility is often just another way to try to end the debate. The Associated Press says the pro-civility bloc among GOP donors points to Newt Gingrich’s attacks on Romney as a “vulture capitalist,” which they believe aided President Obama, who would go on to make a similar argument. But the example is self-refuting. Gingrich was hardly the first to come up with the idea of portraying Romney as a real-life Gordon Gekko; indeed, the Obama campaign was hitting the GOP front-runner on such grounds already. What Friess and company would have asked, in other words, is for Gingrich not to attack Romney, full stop.

It should be obvious by now that Friess is a terrible political analyst. (He’s spent his own money on Santorum, after all.) But even if we take Friess out of the picture, his basic argument, that Republicans should simply agree to disagree, is far from unusual among GOP elites. To some extent, that can be chalked up to their understanding that movement conservatism is not especially popular on its own terms. But I think there’s something else at play here, too. And it’s a consequence of Citizens United and the other rulings like it, which have made these unfathomably privileged men and women even more powerful.

Simply put, Republican donors have, with good reason, begun to see the party as nothing more than a vehicle for their legislative ambitions. But since the GOP is so ideologically uniform to begin with, the battle to establish complete control of the party hasn’t been waged along policy lines. It’s been about politics. And since the party’s candidates have pledge to do what these donors want already, there’s a clear logic to the latter’s request that they don’t let their personal ambitions muck everything up. In essence, they’re trying to make the GOP primary more efficient — or at least as efficient as is feasible until they figure out how to entirely remove voters from the process.