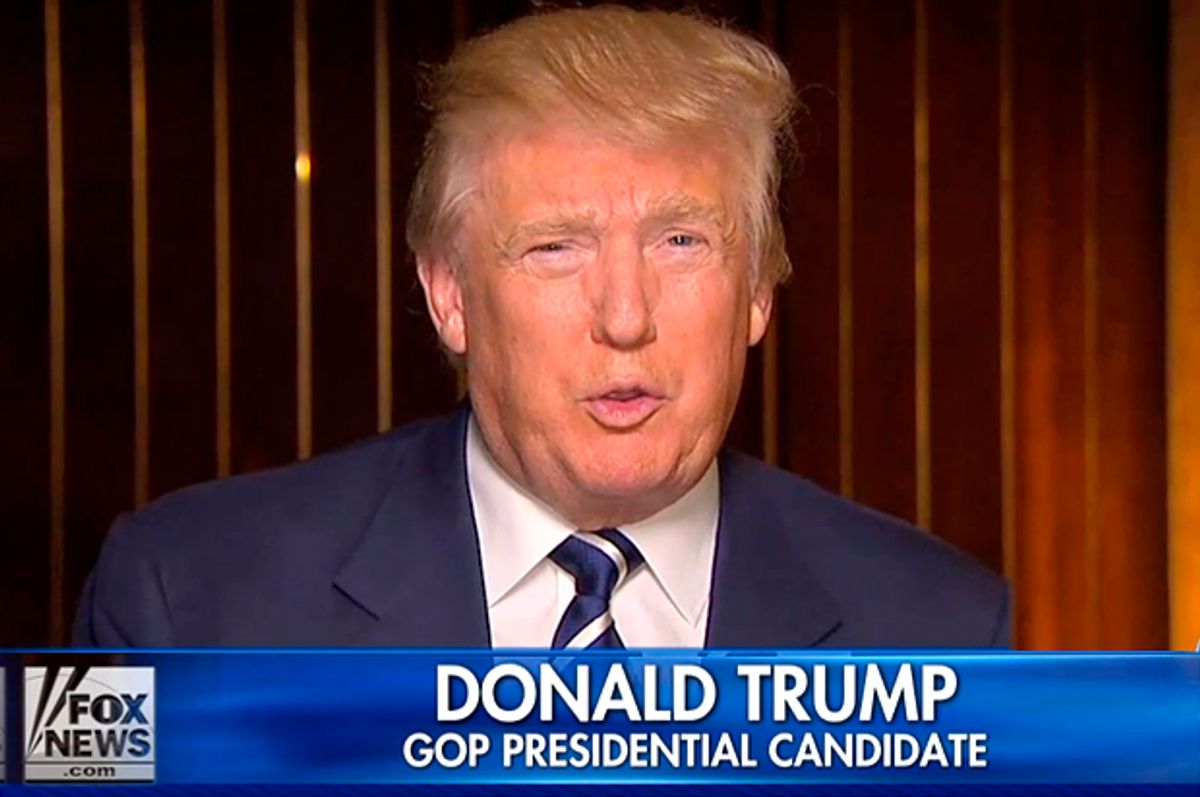 Fox News –and the conservative media-industrial complex – have created a Frankenstein. His name is Donald Trump, and his political success is now a huge problem for the Republican Party. In so many ways, Trump’s political existence was inevitable. For years, Fox News and the conservative talk radio machine have played to the populist Tea Party id: fomenting fear, demonizing immigrants, and enabling every nativist anxiety imaginable. Now they’re paying the price.

Donald Trump is practically a mirror image of the Fox News psyche. Most of his speeches consist of repackaged stupidities plucked right out of the conservative mediascape. It’s kind of brilliant, really. Trump knows his audience, and he beams back at them every idiotic thing they want to hear. Which, of course, is exactly what Fox News does.

The wonderful irony of all this is that the conservative media have ruined conservative politics, far more than liberals ever did. And the results speak for themselves. It’s true that Fox News has promoted the conservative brand and very likely energized grass-roots conservatism in some sense, but at what cost? The GOP, increasingly, is no longer a national party – it’s confined more and more to the South and to pockets of rural America.

The Republicans have had their share of electoral successes in recent years, and Fox News surely aided in that, but if you look closely you’ll see that the political success of conservatives have not led to policy successes. On the contrary, liberalism is winning. Obama, for instance, has been one of the most consequential presidents in modern American history. Both politically and culturally, the country is more liberal today than it was a decade ago. And this has happened in spite of the triumph of Fox News and conservative media.

Conservatism, as a practical political philosophy, is dead in this country. Sure, there are intelligent conservative voices in the whirlwind, but they’ve been overwhelmed by the xenophobic hysteria peddled by the likes of Sean Hannity and Rush Limbaugh. These are the people who define conservatism today. These are the people who’ve poisoned the conservative brand, made it synonymous with backwardness and cultural isolation. And Fox News has been their most significant stage, the ultimate echo chamber.

As a consequence, conservatives (on the whole) are now dumber, angrier and more divorced from the facts. To the extent that Fox News has nurtured the idiocy Trump represents, they’re responsible for his political life – they made it possible. The bile spewed by Trump might as well be Fox News talking points; it’s the kind of garbage you hear every day on their programs. And because so many conservatives get their news from Fox, Republican policymakers are forced to parrot those arguments to voters. This plays well with the base, but it alienates most of the country – as it should.

It will be fascinating to watch how Fox News handles Trump, particularly as we move along in the process. It will be a delicate balancing act. The longer Trump hangs around, the more ridiculous the Republicans look. At the same time, Trump is a boon for ratings; the delightful dolts on Fox and Friends can’t get enough of him. Which makes perfect sense. The right-wing media machine – led by Fox News – has created a demand for his insane ramblings. As the chief supplier, Fox News has an interest in covering Trump, in extending his ruse for as long as possible.

Promoting Trump is a disaster for the GOP, though. His bombast, left unchecked, will undermine the Republican primaries and jeopardize their shot at the White House. How Fox News manages Trump’s ascendance will therefore tell you all you need to know (if you didn’t already) about where their loyalties lie.

I suspect we’ll discover what most observers have long known: Fox News cares about conservatism about as much as it cares about the news.