Hillary's worthless interview: Why Clinton is determined to not make any news

The Dem frontrunner sat down for a big interview with CNN, and got away with saying absolutely nothing interesting 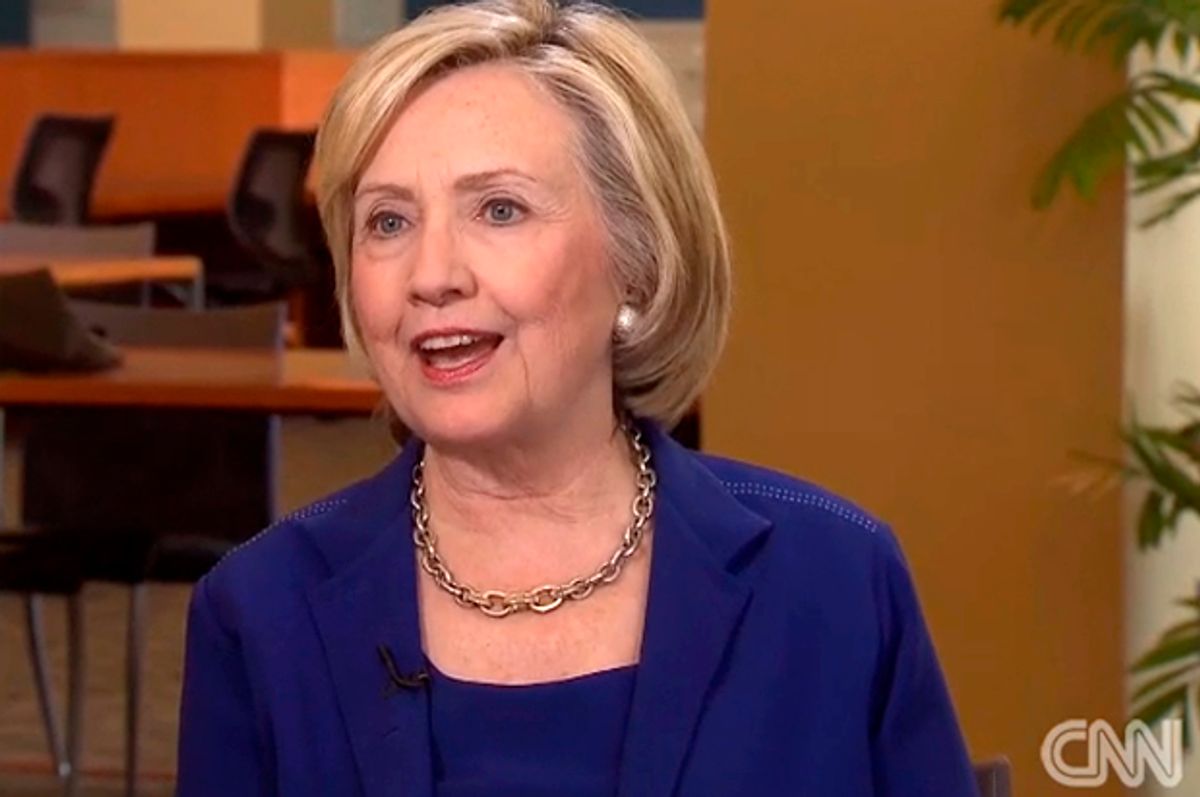 By my reckoning, in the roughly 20 minutes Hillary Clinton spent talking with CNN’s Brianna Keilar yesterday, she answered two questions. The interview with CNN was Hillary’s much-hyped “first national interview” since becoming a presidential candidate, and she succeeded fantastically at making precisely zero news.

The tone for the whole interview was set in the very first question. Keilar asked Clinton about the large crowds Sen. Bernie Sanders, right now her chief rival for the Democratic nomination, is drawing and how his appeal contrasts with her own. Without so much as acknowledging the substance of the question – Sanders and his supporters – Clinton answered by saying over and over that she is happy with her campaign and feels good about it.

CLINTON: Well, first of all, I always thought this would be a competitive race. So I am happy to have a chance to get out and run my campaign as I see fit and let other candidates do exactly the same.

I feel very good about where we are in Iowa. We are signing up thousands of volunteers, people committed to caucus for us. We have a committed supporter in every one of the 1,600 precincts. And one of the things that I learned last time is it's organize, organize, organize. And you've got to get people committed. And then they will follow through and then you bring more people.

So I feel very good about where my campaign is. It will be three months and a few days that we've been at this. I think I've learned a lot from listening to people in Iowa. And it's actually affected what I say and what I talk about on the campaign trail.

So I couldn't be happier about my campaign.

Let no one doubt that Hillary Clinton is a fan of the Hillary Clinton campaign. Keilar tried to get Clinton to comment on a policy issue Sanders has raised – higher tax rates for the wealthy and corporations – and she punted, saying only that she would lay out her economic policy proposals at a later date and that she “look[s] forward to the debate about them.” She just wasn’t going to allow herself to be dragged into anything resembling a policy discussion.

Here it would have been nice had Keilar pushed ahead and tried to get Hillary to take a position on some of the other policy issues that matter to liberal voters and are actually helping to drive the Sanders surge: climate change, Social Security, trade, etc. Hillary has been out front and aggressive on certain progressive issues like immigration and marriage equality, but very cagey on other topics where her rivals are closely aligned with the party’s liberal base. Keilar could have asked her what she thinks about a payroll tax donut hole for Social Security or pressed her for a reaction to Martin O’Malley’s aggressive plan for addressing climate change. It’s unlikely that she would have answered, but it would have been instructive nonetheless to see her dance around a series of critical policy questions.

But we didn’t get that. Instead we got familiar questions about Hillary’s dodgy email practices that she swatted away with the same practiced answers she gave months ago. Keilar asked her if The Clinton Foundation would continue on should she win the presidency, and Hillary came right out and said she would have nothing interesting to say on the topic going forward: “I have no plans to say or do anything about The Clinton Foundation other than to say how proud I am of it.” The two questions she did actually answer dealt with Donald Trump’s insane comments about Mexican immigrants (Hillary was “disappointed”) and whether a woman should be represented on U.S. currency (“I want a woman on a bill”). All the rest were casually deflected or redirected towards banal talking points.

It’s the sort of performance a candidate gives when they understand that there’s no real need to take any risks. Hillary knows that the fundamentals of the Democratic primary are still strongly in her favor and that none of her rivals in 2016 come anywhere close to matching the threat that Barack Obama posed in 2008. And so for now she’s happy and comfortable to just sit back and let inertia carry her forward.