The Wisconsin governor is starting to look presidential, alright -- but it's Tricky Dick he most resembles 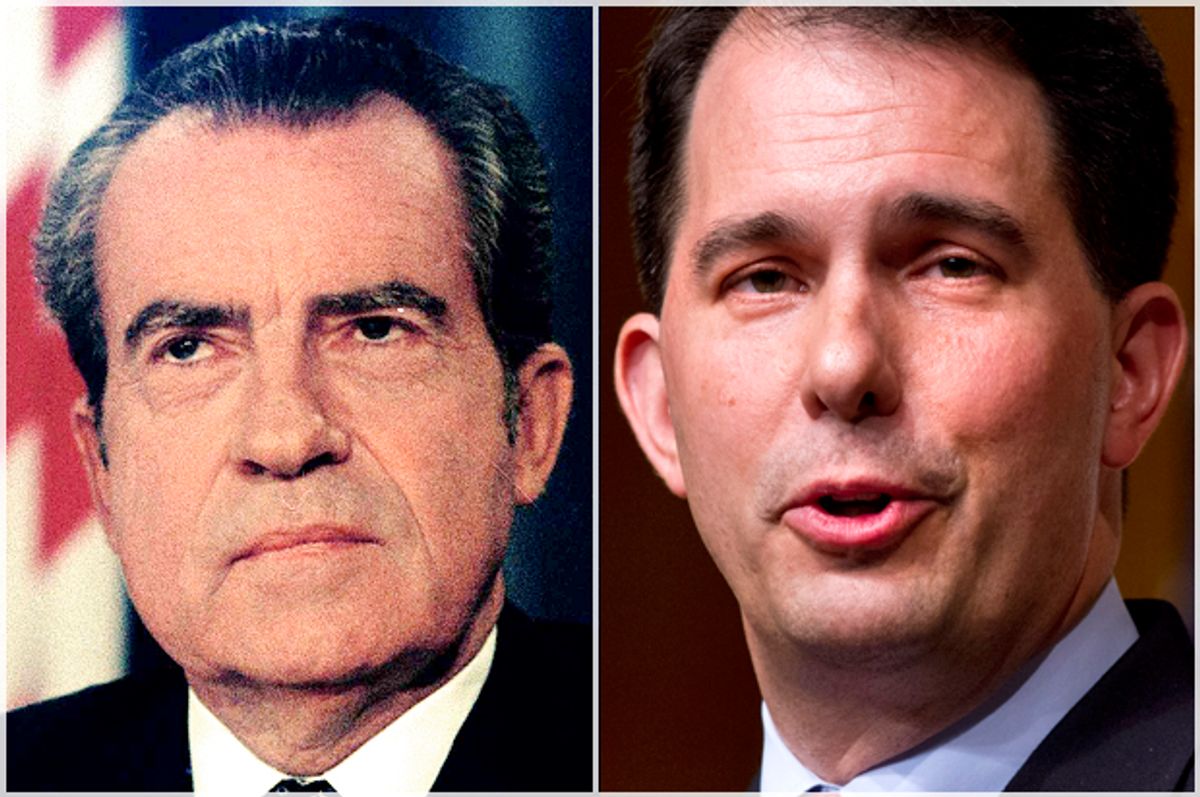 "The intended policy goal of these changes was to provide a reasonable solution to protect constituents' privacy and to encourage a deliberative process between elected officials and their staff in developing policy," his office declared in a statement. "It was never intended to inhibit transparent government in any way."

Now it comes out that Walker’s office was in the thick of drafting the changes. "Legislative leaders let us know that they were interested in making changes to the open records law," his press secretary told state reporters in an email. "In response, our staff provided input regarding these proposed changes."

If that sounds familiar, it should. Walker has used the same dodge before, backing away from a controversial idea after it triggered public outrage, and having it turn out that he was behind the move in the first place.

When Wisconsin Republicans removed the concepts of “truth” and public “service” from the language of the “Wisconsin Idea,” which undergirds the state’s proud university system, Walker blamed a “drafting error.” Ironically, it was an open records request that led to the release of emails proving Walker’s office had in fact asked for the unpopular changes. No wonder he doesn’t like the law.

Last month we learned that while Walker had declined to say whether he supported a ban on abortion after 20 weeks during his re-election campaign last year, he subsequently reassured anti-choice groups that he’d sign a bill that was “likely to come to my desk.” What he didn’t say was that he’d had a hand in drafting the bill – and that according to state GOP leaders, he was the one who demanded that it contain no exemption for rape or incest.

There are so many examples of Walker hiding his real agenda. When he launched his assault on public sector unions in 2011, he said he "wouldn't let legislation affecting private sector unions reach his desk." During his 2014 re-election campaign, he called right-to-work legislation “a distraction.” But two months after being sworn in a second time, he famously signed a right to work bill.

And don’t forget one of his signature moves as Milwaukee County Executive: After state officials repeatedly criticized the county’s handling of social service programs, and threatened to take them over, Walker averted that embarrassment by publicly asking the state to take over the programs --  as if it was his idea.

“This is a state mandate,” he wrote in a letter also sent to the media. “It’s amazing state government has been such a lousy partner on this.” Other county officials said it was Walker’s way to upstage the state “before they make a move on him.”

I’ve already written about the irony that Walker portrays himself as a fighter --  in fact, he suggests his experience taking on unions prepared him to take on ISIS. "We stood up and said what we were going to do,” he told the red-meat-eaters at CPAC this year. “And we did."

No, in fact, he didn’t. He’s lied and weaseled his way through his entire career.

I’m sure, as they pump up their man, Walker’s handlers are trying to make him look presidential. But that’s probably not what they had in mind.