"I don't regret anything": Donald Trump stands by everything he's done and said in his campaign 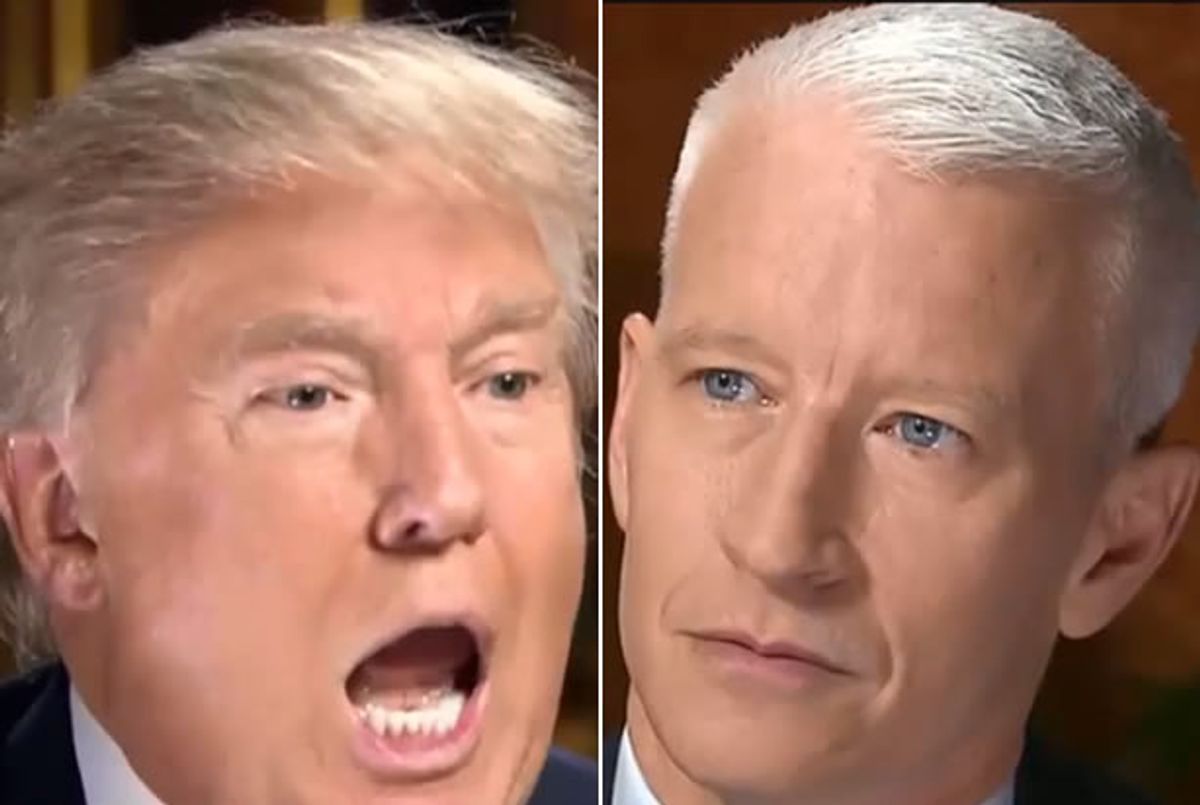 Donald Trump sat down with Anderson Cooper Wednesday night for a wide-ranging discussion about the GOP presidential hopeful and his penchant for making patently inflammatory statements -- all of which Trump vehemently insisted were just as true now as the day he first muttered them.

For example, Trump once again stood by his remarks about Mexico sending drug-smuggling rapists across the border, as well as his misreading of a statistic in a Fusion article, which he vehemently and repeatedly reminded Cooper was owned by Univision.

"That article was written by Fusion," he said. "You know who owns Fusion? Univision! The thing that they own is Fusion, and they're talking about 80 percent rapes. I didn't make that up. I stand by whatever I read from Univision. I didn't do it, Univision did it!"

Cooper tried to inform him that he fundamentally misunderstood the article, but Trump would have none of it. "Sure, whatever it is, it is!" he replied. "But as I said before, it's called rape. It is rape! And it's happening!"

When asked about how much money these remarks have cost him, Trump would only say that "it's a lot of money -- but fortunately, I'm very rich. It's peanuts."

On the subject of ISIS, Trump returned to his favorite topic -- wealth -- by saying that he would defeat the insurgent group by "taking away their wealth, taking away the oil."

"What does that mean?" Cooper asked.

"Bomb the hell out of the oil," Trump replied. "I'll tell you what I hate about this question -- I thought I could win without answering this question because if I win, if you look at General George Patton or MacArthur, they didn't talk about." The problem, he continued, is that people didn't believe him when he said he had a plan, so now he's forced to talk about it.

"If I win, I'm going to attack those oil sites," he said. When Cooper pointed out that doing so would destroy the wealth of Iraq, and that Iraqis might not be happy with that, Trump replied that "there is no Iraq," and "there are no Iraqis, they're divided into so many different little groups."

Once he had completed his troop-free bombing campaign, President Trump would send in ExxonMobil, which would rebuild the oil fields "so fast your head will spin. You see how fast they put up rigs?"

When asked if he regretted retweeting a joke about Jeb Bush's wife, who is of Mexican descent, Trump was adamant. "I don't regret anything!" he said, explaining that if he were married to someone like her, he'd "have a soft spot for Mexico" that would color his position on immigration too.

Incidentally, this interview aired the same day Republican National Committee Chairman Reince Priebus said he spoke to Trump and asked him to "tone it down." It's not known whether that happened before or after sitting down with Anderson Cooper, but no doubt Priebus hopes it was before.