The one moment that changed everything in the Confederate flag debate: "This flag comes down today!"

As South Carolina's fight over the Confederate flag concludes, we should remember one powerful act in particular 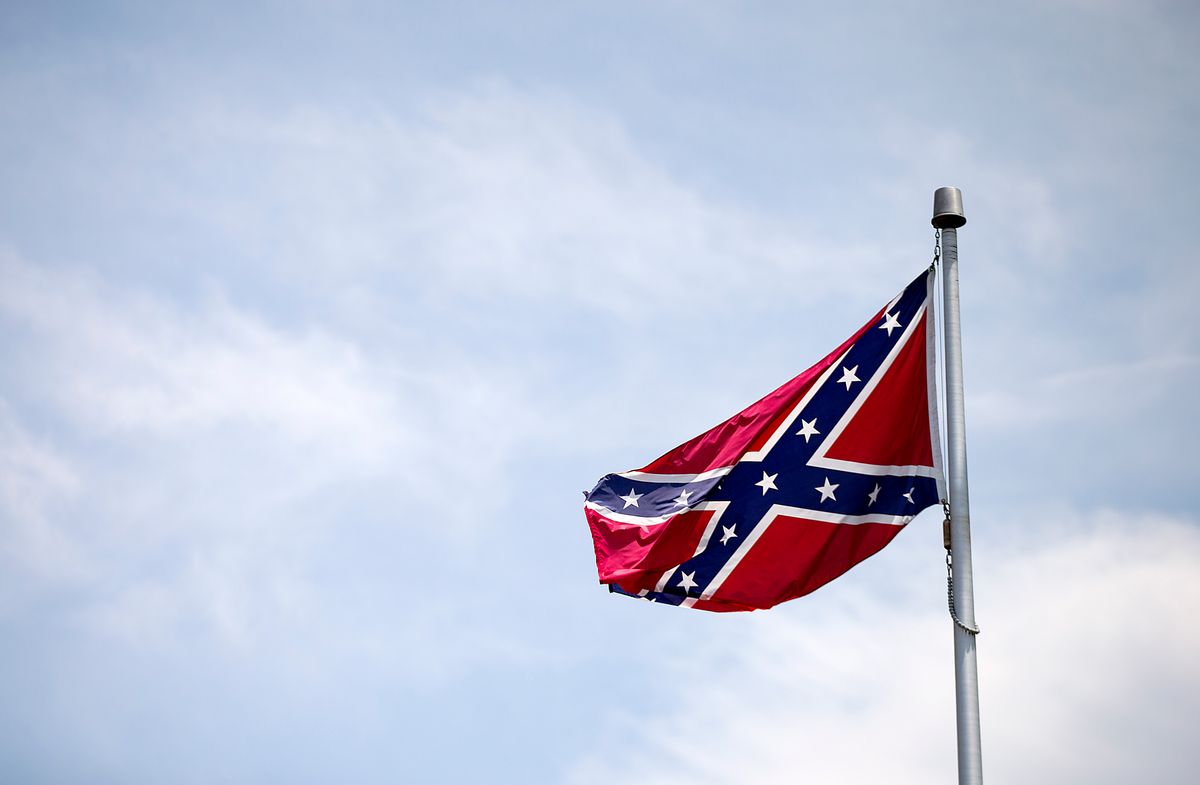 A Confederate flag flies at the base of Stone Mountain Tuesday, June 30, 2015, in Stone Mountain, Ga. (AP Photo/David Goldman) (AP)
--

As Bree Newsome descended the 30-foot flagpole from which she had detached a Confederate battle flag near the South Carolina State House last month, she recited part of Psalm 27. She became a hero in that moment. Newsome took down the flag on June 27; it took the South Carolina House of Representatives 11 days thereafter to come up with a 94-20 vote to remove the flag from State House grounds.

The issue has been tangled up in bureaucracy and trapped in what felt like a painfully slow process thanks to strict rules put in place back in 2000. However, by the beginning of this week it seemed to be headed for a definitive conclusion. The Charleston Post and Courier has been working hard throughout to get a read on where House and Senate members stood with regards to removing the flag, writing on Monday evening that, as of earlier that day, "there were two-thirds majorities in both chambers of the legislature in favor of removing the flag, according to our poll." However this was by no means a smooth process; a number of amendments were introduced by Rep. Mike Pitts, who defended the flag and demanded compromises. But this was no time for compromise.

Even South Carolina State Sen. Paul Thurmond (R), who made a memorable, impassioned case against the flag just days after the Charleston massacre, distanced himself from the legacy of his segregationist Dixiecrat-turned-Republican father, the late Sen. Strom Thurmond. "It is time to acknowledge our past, atone for our sins and work towards a better future," the younger Thurmond said." That future must be built on symbols of peace, love, and unity. That future cannot be built on symbols of war, hate, and divisiveness." He surely must have been thinking of his black half-sister Essie Mae Washington-Williams when he gave that brilliant speech. If only she could have lived to see that moment.

The ironies aren't lost here. And it's worth noting that Thurmond has shown more leadership on this whole issue than Gov. Nikki Haley herself. Thurmond views the flag, the failed Confederacy and South Carolina's segregationist legacy as historical burden, whereas Haley clearly sees it more as the proverbial albatross. Even former Republican presidential candidate Mitt Romney had better leadership on the issue, unequivocally demanding the flag be taken down, while Haley curiously kept the "Bubba" voters in mind during a June 22 press conference during which she requested the flag be removed:

"There will be some in our state who see this as a sad moment. I respect that. But know this -- for good and for bad, whether it is on the Statehouse grounds or in a museum, the flag will always be a part of the soil of South Carolina. But this is a moment in which we can say that the flag, while an integral part of our past, does not represent the future of our great state."

Not impressed with politicians, and channeling the spirit of David’s battle against Goliath, Newsome invoked these powerful words as she descended the flag pole: “The Lord is the stronghold of my life — of whom shall I be afraid?” Before descending, she had a more potent message: ” You come against me with hatred and oppression and violence. I come against you in the name of God. This flag comes down today!”

Different meanings have been ascribed to the Confederate flag, but the one that matters most comes from the indisputable fact that the Confederacy was built around the institution of chattel slavery. South Carolina was actually the first state to secede from the Union, and the Civil War began with the Battle of Fort Sumter near Charleston in April 1861. The Constitution of the Confederate States, ratified on March 11, 1861, makes no references to "family," "heritage" or "tradition." There are, however, numerous mentions of slaves, slave trading rules and slavery, as contained in Articles I and IV of The Constitution of the Confederate States. Seven states endorsed the original Confederacy: South Carolina, Georgia, Florida, Alabama, Mississippi, Louisiana, and Texas. The Constitution is available for viewing online as part of the Yale Law School's Avalon Project.

The prototype for the flag everyone knows these days as the Confederate flag was authorized by General Pierre Gustave Toutant Beauregard, designed by William Porcher Miles, and known as "The Battle Flag of the Army of Northern Virginia." It was used during battles led by Gen. Robert E. Lee, and one variation of the flag has names of Virginia battles stitched into its design: Manassas, Gaines' Mill Farm, Malvern Hill and Seven Pines. Unlike most Confederate generals, Beauregard was able to prosper during Reconstruction, though still in some ways affiliated with the defeated Confederacy, and began advocating for the civil rights and voting rights for freed slaves.

Any of the Confederate flags, whether the original "Stars and Bars" design or the one everyone sees today, would have to be considered symbols of treason. No matter what anyone says, all of these flags are treasonous and represent that historic failure. The second national flag of the Confederacy, referred to as the "Stainless Banner," was designed by William Tappan Thompson, co-founder of The Savannah Morning News who on April 23, 1863, stated in an editorial,

"As a people, we are fighting to maintain the heaven ordained supremacy of the white man over the inferior or colored race; a white flag would thus be emblematical of our cause. Upon a red field would stand forth our southern cross, gemmed with the stars of our confederation, all combined, preserving in beautiful contrast the red, white and blue. Such a flag would be chaste, beautiful and significant, while it would be easily made of silk or bunting, and would be readily distinguished from the flags of other nations."

It was utterly disgraceful to have a Confederate flag flying at full mast during Rev. Pinckney’s funeral. By legitimizing such a divisive and hateful symbol all these years, South Carolina has dishonored the state’s long legacy of black resistance against state-sanctioned racial oppression. It also has dishonored the legacies of black scholars and native sons Archibald Grimké and Ernest Everett Just, both of whom were born in Charleston. And even though the South Carolina House finally did the right thing last night, voting to permanently remove the flag from State House grounds, the politicians of this state still have a tremendous amount of work ahead to dismantle a system and a way of thinking that has disenfranchised so many people. Bree Newsome’s courageous act of defiance was an apt response at a time when no one else seemed to be taking action. That’s why she’s a hero to so many people.

The moment Newsome took down the flag was imbued with a palpable sense of fearless valor and indefatigability; of courage at a time when black churches have been burning and the Emanuel 9, including librarian Cynthia Hurd, were still being laid to rest. Newsome became a comic-book superhero when she descended the pole with the Confederate flag in hand. And she carried the legacies of unsung Civil Rights Movement heroes: Ella Baker, Claudette Colvin, Viola Liuzzo, Fannie Lou Hamer, Mabel Williams, Diane Nash, Daisy Bates and the four little girls killed in the 16th Street Baptist Church bombing on September 15, 1963. She carried the spirit of Ruby Bridges, the brave 6-year-old girl who integrated William Frantz Elementary School in New Orleans and became a powerful hero immortalized in the Norman Rockwell painting "The Problem We All Live With." Newsome's protest against the Confederate flag was a decisive, courageous moment; It was a moment when many of us could all finally just breathe.