The buffoonish Texas congressman is on the climate-change warpath yet again, this time comparing himself to Galileo 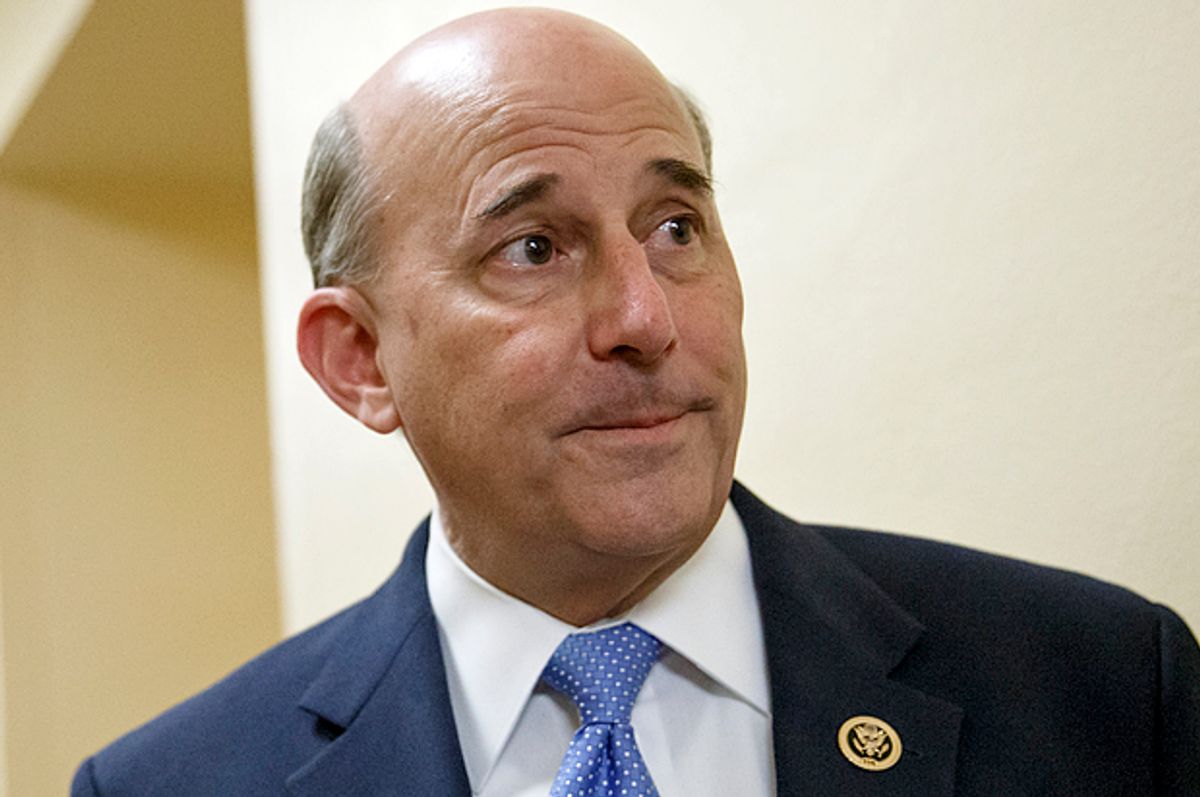 The only thing more terrifying than realizing Louie Gohmert is an elected member of Congress, tasked with voting on laws that impact the most powerful nation in the history of humankind, is hearing Louie Gohmert talk about science. The notoriously loony Texas congressman -- who was also once a judge, by the way -- appeared on CSPAN Wednesday and elaborated on the pope's encyclical addressing the climate crisis. In the process, Gohmert hilariously compared himself and other science deniers to Galileo.

In addition to his flailing on Galileo, Gohmert also accused Pope Francis of not presenting a fully objective opinion. In other words, according to Gohmert, the pope suffers from the dreaded liberal media bias and he should have included the views of, I guess, ignoramuses like Gohmert in the encyclical as well. You know, in order to be fair and balanced.

"The trouble is that [the pope] has been persuaded that climate change is something that is dramatically affecting the planet right now, he’s bought in to all this. We have had popes that made enormous mistakes that were influenced by the world around them."

As if accusing the pope, who himself has a degree in chemistry, of being hoodwinked on climate science weren't preposterous enough, Gohmert went on to say make the aforementioned Galileo allusion:

Gohmert isn't the first Republican know-nothing to invoke the memory of Galileo. Senator and presidential candidate Ted Cruz tried to pull the same fast one a few months ago, and it's even more absurd when marble-mouthed Gohmert goes there. But of course his people will suck it down like Coca-Cola -- he wouldn't be saying it otherwise. In order for a goon like Gohmert to succeed in politics, he has to have his finger on the pulse of his voters, and his voters aren't question a damn thing he says, especially when it comes to a character like Galileo.

However, if Gohmert or his people bothered to double-check this nonsense, they'd learn the following:

The most astonishing thing about deniers like Gohmert, whether it has to do with climate science or evolution, is that we can observe the science in real time. We can observe life forms evolving all the time, and we're observing the impact of the climate crisis today -- right now. It can be objectively and scientifically measured. Sure, the finer points can be debated, but the conclusions are, for all intents and purposes, universal. Scientists can measure the acidity of the oceans or the tonnage of CO2 being injected into the air by fossil fuels. They can correlate all of the data, including weather patterns, into peer-reviewed models that prove it's all happening. Even non-scientists can see how weather conditions are becoming more erratic and severe.

All told, climate science deniers deal in the Lloyd Christmas Theory of Deductive Reasoning. In "Dumb & Dumber," Jim Carrey's character is told by Lauren Holly's character that there's only a one in a million chance they'll end up together. While normal people would obviously regard her response as a categorical rejection, Carrey grins and exclaims, "So you're telling me there's a chance! Yeah!" Likewise, Gohmert is desperately grabbing onto a statistically minuscule number of scientists whose theories run contrary to the other 97 percent -- because there's a chance!

By the way, while Gohmert clings to this notion that he's just like Galileo and that his version of science is actually correct, he also believes that same-sex marriage will convince God to stop protecting the United States and, consequently, rain down on us a plague of terrorist attacks and other apocalyptic atrocities. Put another way: The climate crisis is a hoax, but it's totally believable that God will allow hurricanes and ISIS to destroy America because of gay marriage. These quacks also shamelessly point to snowstorms in New York as examples of how global warming isn't real, even though New York is clearly not the globe. And we're expected to take Gohmert seriously when he talks about science.