"It was always based on a flat lie": Why neo-Confederates are finally losing the war for American history 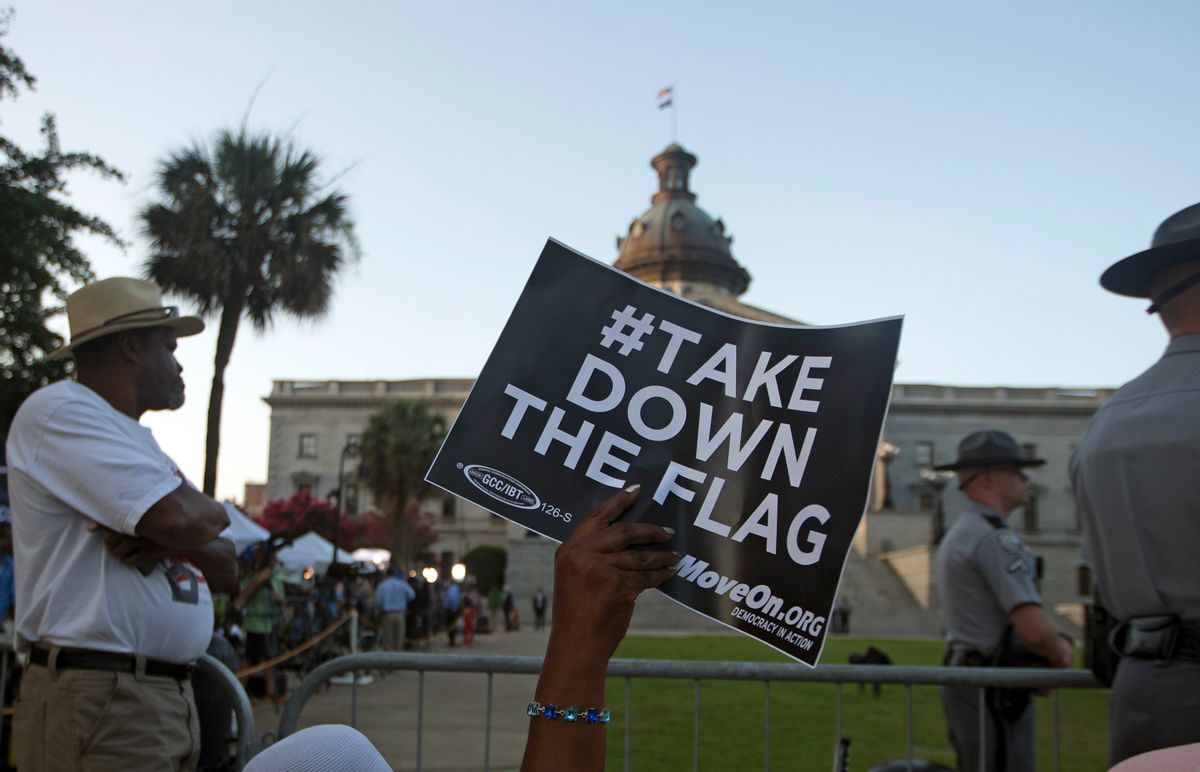 A woman waves a sign as she waits for the Confederate battle flag to be removed from in front of the South Carolina Statehouse, Friday, July 10, 2015, in Columbia, S.C. (AP Photo/John Bazemore)
--

Clickbait headlines and the general hyperbole inflation of the media today has devalued the word somewhat, but on Friday morning, something truly amazing happened: South Carolina, the birthplace of the Civil War and Southern rebellion, finally removed the Confederate battle flag from its capitol grounds. It did so in broad daylight, with the full backing of its conservative governor as well as the clear majority of its legislature, itself also quite conservative.

Of course, this was just the most conspicuous and shocking example of a trend that emerged after a white supremacist allegedly murdered nine African-Americans in a historic South Carolina church. The trend has included bastions of Southern pride like Mississippi, South Carolina and even NASCAR distancing themselves from a symbol that only a few months ago they would defend as representing "heritage not hate." It appears that the Confederate battle flag, which lingered in the American mainstream for decades, is finally beginning to be widely understood for what it really is.

With an interest in getting some perspective on this cultural shift, as well as some background on why this de-Confederatization is necessary in the first place, Salon reached out to historian James Loewen, the best-selling author of "Lies My Teacher Told Me: Everything Your American History Textbook Got Wrong" and "Lies Across America: What Our Historic Sites Get Wrong," two books that helped lay the groundwork for this sea change. We touched on the events of recent weeks, Loewen's work, and his hope for the future. Our conversation can be found below and has been edited for clarity and length.

Are you surprised by how quickly the mainstream has reassessed the Confederate battle flag?

All that said, how can we explain the new history textbook in Texas, which downplays slavery's role in causing the Civil War?

The textbooks have paid homage to the neo-Confederate position and the neo-Confederates' power in textbook adoptions, including [in] Texas and all other Southern states. Almost half of all states adopt statewide, and every Southern state adopts statewide. Publishers no longer publish special Southern, or neo-Confederate, editions of their textbooks. They used to, up through at least the 1960s. But for the last 50 years, they have mystified secession and omitted any bad things about the Confederacy, hoping thereby not to offend the Texas adoption process, and that of South Carolina, Mississippi, etc.

It isn't just Texas, and it isn't new. These new standards in Texas put slavery third in the causes of the Civil War. First there's sectionalism — of course the sectionalism is driven primarily by slavery — and second it's states' rights. And that's just flatly a lie, flatly wrong. Then, finally, third, they admit slavery. Most of our textbooks in use, whether in Vermont, Oregon, or anywhere else, already put it that way. They already conform.

Do you think that the way textbooks are written will change, given the recent public reassessment?

I hope so. I'm doing what I can to force that to happen. Part of the problem is that most of the textbooks for middle schools and high schools were not written by the people whose names are on them. They rent those names. The books are often written by nameless gnomes, in the bowels of the publishers, who may or may not have qualifications in history. Even if the main narrative is by one of the authors listed on the cover, the boxes, the questions, the maps, the photos and captions — which amount to 60 percent, often, of the textbooks — are by other people. Again: perhaps qualified, perhaps not.

Another problem with these textbooks is that they never quote, or almost never quote, original sources. With regard to secession, they typically do not quote the central documents, such as South Carolina's famous "Declaration of the Immediate Causes which Induce and Justify the Secession from the Federal Union." That document makes absolutely clear that it's all about slavery, and that South Carolina is against states' rights.

The Confederacy was against states' rights, you think?

Indeed. They list the states, and the rights, that outrage them. For instance, they are outraged that New York no longer allows temporary slavery, or slavery transit. It used to be that, for instance, a rich South Carolina plantation couple could spend August watching Broadway shows, and bring their cook along, but now New York says, "No, we're trying to run a slave-free state. If you bring your cook into New York, she goes free." South Carolina is outraged at this and says so in this document.

South Carolina is outraged at New England states, because they let black folks vote. Who votes in America is a states' right until the 15th Amendment gets passed during Reconstruction, two whole eras after the period we're talking about, 1859-1860. So it's none of South Carolina's business who votes in New Hampshire, but they make it their business. And, of course, they are outraged by little ways in which Pennsylvania, Illinois and other border-line state are interfering with the operation of the Federal Fugitive Slave Act.

It is utterly clear from these documents that South Carolina, and other states, seceded for slavery and against states' rights. But, since they don't quote the documents, the textbooks don't make this clear.

One of the best-selling textbooks is the "American Pageant." I think it's the only one of the six textbooks that I have recently studied that actually does quote from this South Carolina document. And they quote enough of it to make a box. But somehow they do this without ever using the s-word, without ever allowing the reader to learn, or even infer, that slavery was why South Carolina was seceding. This isn't easy! They accomplish it, of course, with the miracle of four dots.

There's a lot of focus on textbooks, but what about the many misleading historical monuments throughout the country, which you've written about, too?

I think the monuments are getting more attention than the textbooks, so far. I'm delighted with the efforts to remove the bust of Nathan Bedford Forrest from the state capitol in Tennessee, for example. I hope that that type of action will continue across the United States.

I have to speak to the issue that people always raise, You can't erase history! Are you trying to change the past? No. But when you, for example, name a highway which starts right across the Potomac River in Arlington, Virginia, and it goes down through Mississippi, out west, and finally ends at the Canadian border near Seattle, for Jefferson Davis, that doesn't teach anyone anything about what Jefferson Davis did, except that he is in the past, and is to be honored.

Jefferson Davis, of course, committed treason on behalf of slavery. I don't think it helps our nation move toward  better race relations, or toward a better understanding of the past, to honor him for that. Why don't we change the name of the highway, and yes the businesses in Arlington will have to change their stationery, and put up a historical marker at each end of the highway to state what it had been named, why it was picked in the 1920s to make people, as far away as in Seattle, think this was appropriate, and why it was changed. Then, we have more history and less honoring.

In Georgia, they moved a statue of former Sen. Tom Watson from the capitol grounds, and the plan is to replace it with a statue of Martin Luther King Jr. What do you think about the idea of having both statues, rather than replacing one with the other? Is that an approach you'd recommend going forward?

He started out as a populist for the little man, and the little man included lots of black folks. That is to say, African-Americans and poor white sharecroppers were the poor people being taken advantage of in Georgia, and Tom Watson made common calls with both of them. But then, he became more and more racist, perhaps in order to become more politically successful, or perhaps he had always been racist and had hidden it at first. I don't know. That might require a psychoanalyst.

So, his statue deserves a complex historical marker right in front of it, that explains what I just stated — explains his accomplishments, his bend toward white supremacy, and explains then that his statue was originally put up on the capitol grounds partly because of his white supremacy, in the following year, and then in 2015 it was removed from the capitol because of his white supremacy. That would teach us a whole bunch of history, not only about Tom Watson, but also about the process of how we remember Tom Watson.