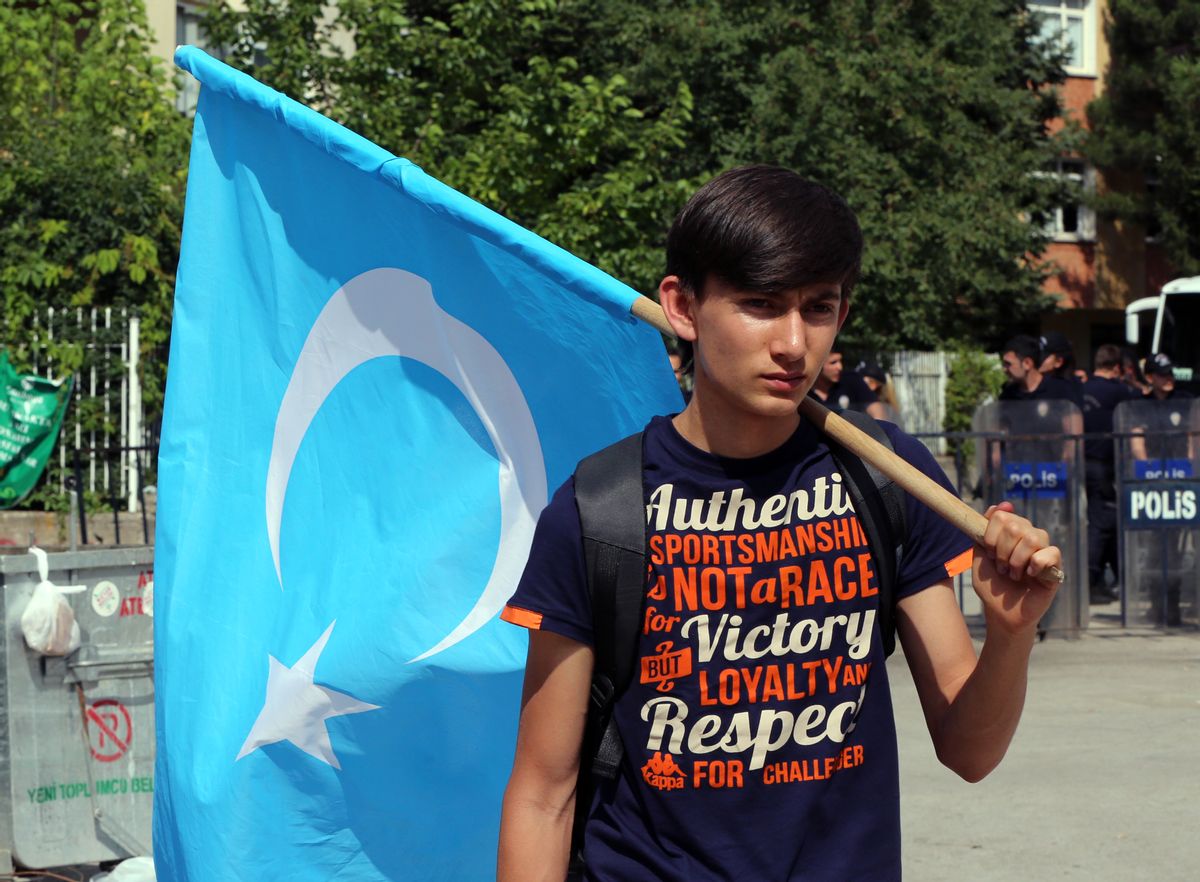 An Uighur boy carries a flag of East Turkestan, the term separatist Uighurs and Turks use to refer to the Uighurs' homeland in China's Xinjiang region,after the riot police used pepper spray to push back a group of Uighur protesters who try to break through a barricade outside the Chinese Embassy in Ankara, Turkey, Thursday, June 9. 2015. Thailand sent back to China more than 100 ethnic Uighur refugees on Thursday, drawing harsh criticism from the U.N. refugee agency and human rights groups over concerns that they face persecution by the Chinese government. Protesters in Turkey, which accepted an earlier batch of Uighur refugees from Thailand, ransacked the Thai Consulate in Istanbul overnight.(AP Photo/Burhan Ozbilici) (AP)
--

BEIJING (AP) — China's government has alleged that more than 100 minority Muslim Uighurs who were sent back by Thailand after fleeing China were on their way to fight in the Middle East and that some were implicated in terrorist activities at home.

Thailand has been harshly criticized by the U.N., the European Union and human rights groups for repatriating the 109 Uighurs back to China, where activists say they face persecution, instead of sending them to Turkey, which has accepted other Uighurs.

The Uighurs (pronounced WEE-gurs), a Turkic-speaking Muslim minority in China's far western region of Xinjiang, have complained of harsh cultural and religious suppression as well as economic marginalization under Chinese rule. Beijing has accused Uighur separatists of terrorism in Xinjiang, where ethnic violence has left hundreds of people dead.

China's official Xinhua News Agency, citing the Ministry of Public Security, said late Saturday that the 109 "illegal immigrants" had been on their way "to join jihad" in Turkey, Syria or Iraq, and that 13 of them had fled China after being implicated in terrorist activities. Another two had escaped detention, according to Xinhua.

The report also claimed that a Chinese police investigation had uncovered several gangs recruiting people for jihad, and that Turkish diplomats in some Southeast Asian countries had facilitated the illegal movement of people.

The Uighurs were detained in Thailand more than a year ago, but claimed to be Turkish. A group of 173 were sent to Turkey after Thai authorities said they determined they were indeed Turkish, but the 109 were found to be Chinese, according to Thai deputy government spokesman Maj. Gen. Verachon Sukhonthapatipak.

Another eight arrived from Thailand to Turkey on Saturday and 52 remaining Uighurs would be sent back to their country once their nationalities were verified, Verachon said Saturday.

Xinhua said that many of the 109 Uighurs had been radicalized by materials sent by the exiled World Uyghur Congress, a Munich, Germany-based rights group for the ethnic minority, and the East Turkestan Islamic Movement, designated by China as a terrorist organization.

In response to the report, Dilxat Raxit, World Uyghur Congress spokesman, said Sunday that China was "shirking responsibility for Uighurs fleeing because of its policy of suppression. The so-called radicals are those who hope to flee China and live a stable and dignified life in a safe and free country."