In the sadistic power-charged worlds of "Bad Blood" and "Bitch Better Have My Money," empathy is for the weak 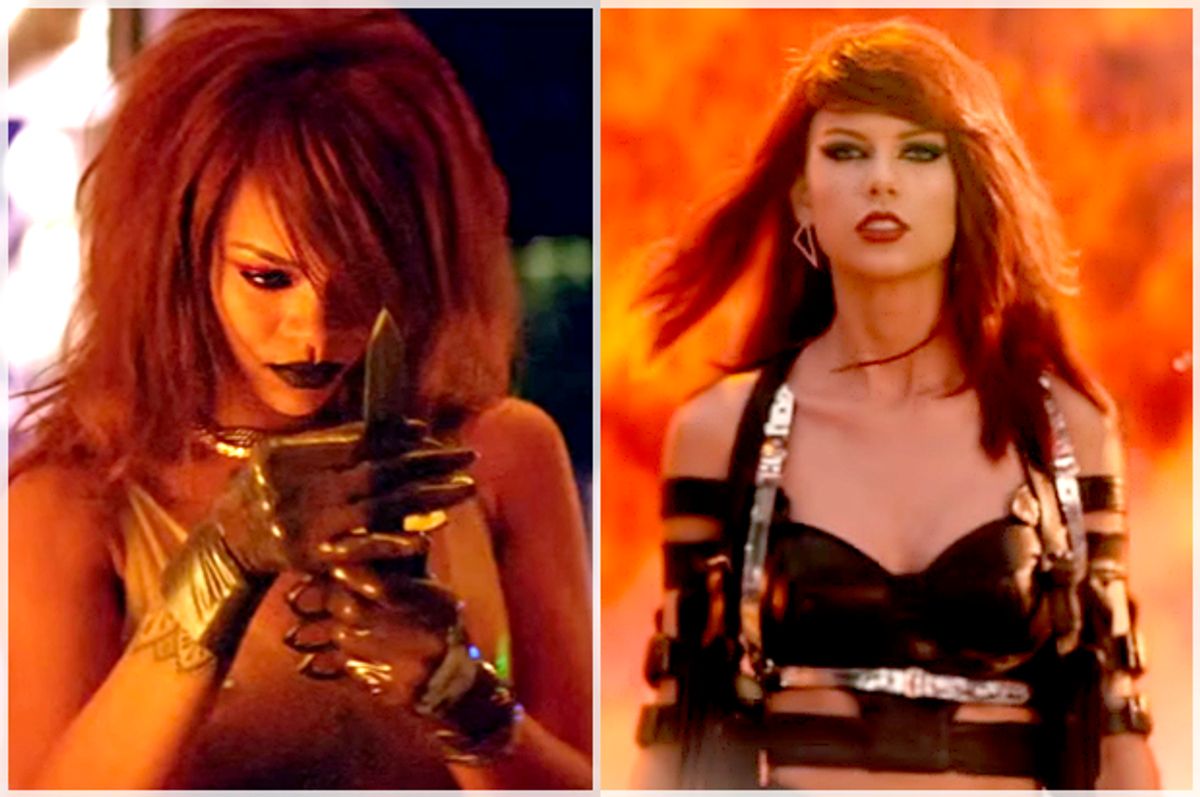 Throughout her video for "Bitch Better Have My Money," Rihanna’s new gleefully violent revenge anthem, Rihanna channels the motifs, images and iconography of directors ranging from Martin Scorsese to Quentin Tarantino. Rihanna’s video aims to shock and titillate viewers with scenes of sexualized violence. In one of the first scenes a kidnapped woman is hung upside down, topless. We see images of her incapacitated, forced to drink and vomit in a bucket, and hit over the head with a glass bottle when she tries to seek out help. In the end, the twist of the video is that the “bitch” refers not to the beautiful woman who has been kidnapped, but her husband, who refuses to dish out money, even after learning that his wife is being tortured.

What happens to the kidnapped woman is ambiguous; some viewers contend that she was drowned in a swimming pool: In one scene toward the end we see her lifeless facedown under the water next to Rihanna, who is buoyant and beautiful. Others claim, as a friend expanded on in detail over lunch, that she becomes a member of Rihanna’s girl gang: at times in the video she seems to really enjoy hanging out with the women who kidnapped her, smiling and laughing, even as she is tied up. In an essay for New Statesman, writer Margaret Corvid suggests that "BBHMM" is a BDSM fantasy. The video features a number of pieces of S&M gear, and plays with many taboos regarding gender, race, and class.

One of the intriguing aspects of "BBHMM" is just how divided women have been in their response to the seven-minute music video. Rihanna’s use of a female body as kidnapping victim has caused many feminists to express concern, just as Rihanna’s reclaiming of power from a white, wealthy couple who tried to victimize her has been seen by other feminists as brave and triumphant. In her article “This Is What Rihanna’s BBHMM Video Says About Black Women, White Women and Feminism,” Mia McKenzie says,

“The harm done to us by white men and white women isn’t vastly different to many of us. White women have been unapologetically violent towards black women for centuries. They’ve used the power of the state, of the police, of the courts, of the media, and of individual white men to harm black people, including black women, time and time again. They are as harmful to us as white men are. So, for many of us, kidnapping the white brother or the white wife is all the same.”

Is "BBHMM" a power anthem, reclaiming troubling images of sexualized violence, with an empowered black woman at the helm, or is it simply feeding into a culture that habitually features beautiful, tortured women as a trope?

Often, when we talk about images of violence against women we assume that we are talking about how these images titillate male audiences. But the advent of videos like Rihanna’s "BBHMM" and other female revenge fantasies like Taylor Swift’s "Bad Blood" make a case for the ways in which women have also been socialized to view enacting violence, and especially enacting violence on female bodies, as a sign of strength. Throughout "BBHMM," Rihanna plays with elements of what is today often referred to as “toxic masculinity” — guns, money, expensive foreign cars, yachts, swimming pools, drugs and sexualized violence abound, and the revenge fantasy is predicated on a sense of absolute entitlement. Rather than transforming or reimagining any of these images, Rihanna adopts them, even using the language of pimps to demand that the male “bitch” give her hard earned cash.

Likewise, Taylor Swift’s “Bad Blood” presents an all-female army who use an arsenal of deadly weapons to eviscerate the woman who betrayed her. Each video is an escape to a world of fantasy violence that is typically read as “masculine”—the women seeking retribution are hard-eyed, focused, and bent on getting what is owed to them, even if it means destroying everything around them in the process. In the world of "BBHMM" and "Bad Blood," empathy and kindness are presented as weak, while the kind of cold sadism necessary to destroy an enemy is presented as intrinsically powerful.

In her essay “Dead Girls Sold Here,” writer Anna March argues that feminists should push back on images of women being brutalized for entertainment, rather than silently accept that the influx of these narratives is unchangeable. One of the reasons rejecting sexism is challenging for women is not simply because they feel powerless; it’s that women have also been seduced by these same images. Who wouldn’t be? We grew up on artists, musicians and directors who taught us that violence is sexy, that true power comes from calling the shots. For the past 10 years, we’ve watched male antiheroes dominate on-screen and become the most lauded shows on television. The iconography of these worlds always includes objectified women, who are frequently the victims of violence. Videos like "BBHMM" and "Bad Blood" show how the women who are watching these iconic films and TV shows are not necessarily identifying with female victims at all.

The sexualized violence in "BBHMM" is particularly troubling. While Swift’s revenge fantasy is crafted to look more like a generic action movie, Rihanna’s video is more explicit and centers more specifically on an abused female body, naked and helpless.

But while some feminist critics blame individual artists for work that is problematic, I find "BBHMM" particularly interesting precisely because these types of images of sexualized violence against women do not exist in a vacuum. Women are raised on images of toxic masculinity just like the men around us are. Many of us also played "Grand Theft Auto" and watched great films featuring tons of sexualized violence against women: "Last Tango in Paris," "A Clockwork Orange," "Goodfellas," "Wolf of Wall Street" —the list goes on and on. A number of women love series like "Game of Thrones" and "True Detective," which often feature brutalized women as victims, not in spite of the violence, but because, like men, we’ve come to recognize the allure of blood lust, as well as the amazing tapestry of human emotions that are often explored within these worlds. In a cultural landscape where women are often objectified and victimized, a number of women have learned to identify with male heroes and antiheroes, rather than fixate on the damsels in distress waiting to be rescued.

One of the joyful things about watching "BBHMM" is seeing a female auteur flex her muscles, building on the themes of successful artists who came before her and owning her power. The painful thing is knowing that this fantasy of power is so easily stripped away. In writing this article I watched "BBHMM" over and over again; at first the scenes of violence were hard to sit through, but eventually I became inured to it. The shocking things became less shocking; the ordinary things more ordinary. I felt this same way listening to Eminem rap years ago in my teens and early 20s. I felt this way driving around with my college boyfriend, me in the passenger seat, listening to a version of “Bitches Ain’t Shit” by Ben Folds.

“It’s ironic. It’s funny,” my then boyfriend told me gently. “It doesn’t mean anything.”

But it did. And it does. I’ve sat through so many songs about bitches and whores, and so many shows where cut up female bodies are just part of the landscape. “It’s not about you,” a girl at a party tells me, when a sexist song begins to play. But it is. It is and it is and it is.

Roxane Gay’s brilliant book "Bad Feminist" maps out the many ways that working toward feminist goals is difficult, since it’s a movement powered by people, and people are inherently flawed. We like things we shouldn’t. We’re drawn to media messages that may not be good for us. We make excuses for depictions of violence against women. We start to develop Stockholm Syndrome. We start to think, if this is the way the world is then I’m at least going to be the one who knows how to wield a knife.

In Rihanna’s video we can choose to interpret the kidnapped woman’s story as one of having her dignity stripped away, or one of her being seduced into loving her sexy captors. At the end of "BBHMM" we ignore this question, as we turn our attention to Rihanna destroying the man who wronged her. And yet, one of the last images we encounter is as evocative as it is familiar: a close up and pan away from a beautiful naked woman, this time Rihanna herself, covered in money and blood.