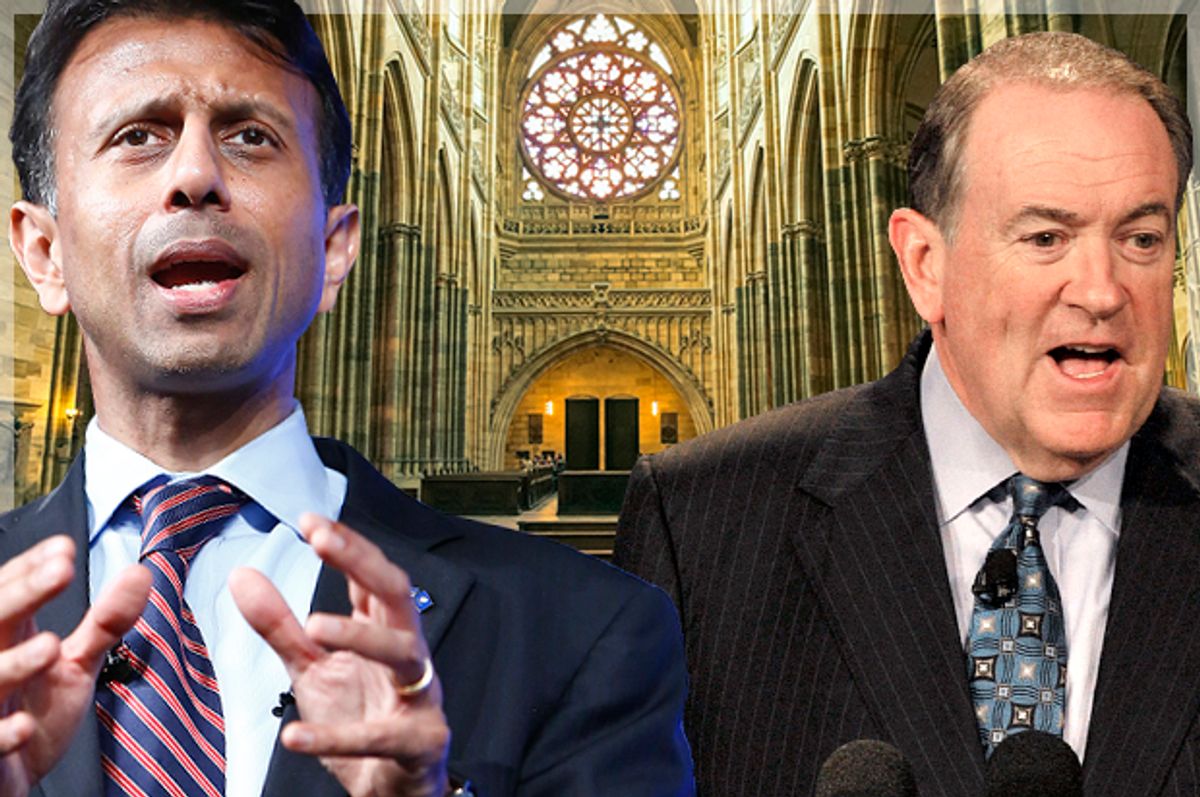 The legalization of same-sex marriage has been met with near-comical resistance on the right. The GOP presidential candidates in particular are struggling to face this new – but always inevitable – reality. Most of them have embraced a shopworn trope about a shadow war on Christianity in this country. By their lights, being Christian has become a borderline crime in today’s America.

According to Mike Huckabee, we’re “criminalizing Christianity in this country by telling people who hold to an orthodox worldview of biblical marriage that if you still believe that … you will be guilty of discrimination, which could result in some kind of civil or criminal action against you.” Got that, Christians? You keep making noises about the Bible and the big government boogeymen will lock you up!

The reliably feverish Bobby Jindal expressed similar outrage on NBC’s “Meet the Press”: “I think the left is now going to go after our First Amendment rights …We have to stand up and fight for religious liberty. That's where this fight is going. The left wants to silence us, Hillary Clinton wants to silence us, and we’re not going away."

Bobby Jindal has a talent for incoherence, so it’s not worth unpacking this, but let’s be clear: No one is being “silenced” here. On the contrary, rights to which everyone is entitled are now available to everyone – that’s precisely the opposite of oppression.

Ted Cruz, who appears designed for hyperbole, told an Iowa crowd that "the last 24 hours at the United States Supreme Court were among the darkest hours of our nation." That’s right, folks. Allowing gay people to marry is among the darkest moments in our nation’s history, a history that includes genocide, slavery, segregation, the Great Depression, internment camps, 9/11, and atomic bombs. That’s how grave this situation is. Cruz, culture warrior that he is, knows a war on Christian values when he sees it – and he wants his devotees to know he’s on the front lines.

Of course Mike Huckabee was not to be outdone. He let the fine people of Iowa and New Hampshire know that this is a moral crusade. Invoking Martin Luther King Jr., Huckabee said: “An unjust law is no law at all…I don’t think a lot of pastors and Christian schools are going to have a choice.” And why won’t they have a choice? Well, because the very essence of Christianity is being challenged here – Christians have no choice but to revolt, Huckabee argues.

All of these arguments (if we can call them that) play well with the Republican base, but they’re either completely false or deliriously overstated. There isn’t a war on Christianity – there never has been. Implicit in the “war on Christianity” argument is this assumption that to be a Christian is to be anti-gay marriage. That simply isn’t true. Indeed, the Episcopal Church just approved religious weddings for gay couples. The Presbyterian Church has taken similar measures. Are members of these churches no longer “real” Christians? Are they part of the war on Christianity, too?

Opponents of same-sex marriage love to cite the Bible in defense of their views, but one can do the same for slavery, which finds justification in both the Old and New Testaments. Truth is, virtually every Christian affirms parts of the Bible and ignores others. I don’t know a single Christian with any interest in stoning adulterers, but the Bible makes clear that this is an appropriate (and necessary) punishment. There are countless other examples, of course, but the point is clear enough: The Bible is brimming with unethical mandates, and it’s a good thing we don’t take them all literally.

The Bible is a text. Like all texts, it’s open to interpretation. Which parts of the Bible people choose to live by tells you much more about them than the text itself. The decision to legalize gay marriage isn’t an affront to Christianity; it’s a rejection of particular beliefs held by particular Christians. These people aren’t bigots because they’re Christians; they’re bigots who also happen to be Christians.

If the success of the LGBT movement is a war on anything, it’s a war on bad ideas. Anyone who believes that marriage, as an institution, has remained static over time doesn’t know what he’s talking about. Originally, marriage was a kind of economic transaction, a means of transferring property and preserving wealth. Only recently (historically speaking) has marriage had anything to do with love, compassion or parenting.

Marriage is an evolving social construct. If the institution is valuable (it is), if it serves society (it does), why shouldn’t we extend it to include more people? We should and I’m glad we have, as are many of my Christian friends. The only people who feel their “religious liberty” is under assault are those who use their religion as a cover for their bigotries.