"The Civil War never ended": Jesse Jackson on the racist agenda that must come down with the Confederate flag

Exclusive: “South Carolina must decide if massacre is a moment of embarrassment or transformation,” he tells Salon 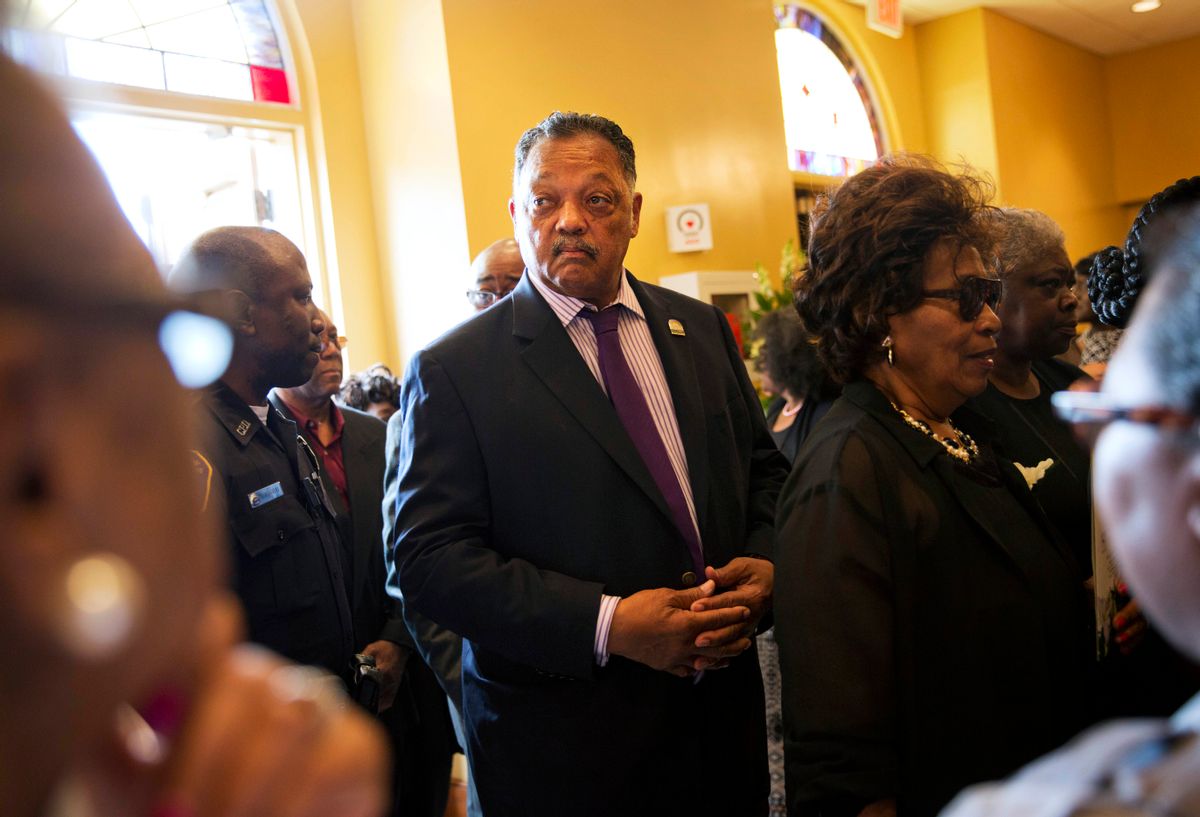 The Rev. Jesse Jackson arrives for the funeral service for Ethel Lance, 70, one of the nine people killed in the shooting at Emanuel AME Church. (AP Photo/David Goldman)
--

Since the homicidal evil named Dylann Roof claimed the lives of nine black worshipers in Charleston, South Carolina, the country has commissioned a conversation about racial harmony and diversity. The audible defeat in President Obama’s voice when he made yet another call for gun control to millions of deaf ears was an early signal of legislative dysfunction, and the political system’s inability to react meaningfully to crisis.

Aware of the difficulties of doing anything important, not unlike the exhausted president, American liberals could succumb, as they often do, to the temptation of settling for what is unimportant. Like a sick man ingesting a placebo, America will enforce the long overdue removal of the Confederate Flag, and even discontinue airing television programs with the flag visible on automobiles -- but resist organizing behind reforms and politics of substance.

Jesse Jackson, the civil rights leader originally from Greenville, South Carolina, was recently in his home state to visit his mother and to witness the ceremonial removal of the Confederate Flag.

“There are really two flags,” he explained to me when we discussed the matter on the phone. “In 1865, Robert E. Lee surrendered the Confederate Battle Flag to Abraham Lincoln after the South lost the war. That flag not only represented slavery, but also secession and sedition. The flag we see now emerged after President Truman desegregated the military, and the Dixiecrat Party formed to fight the civil rights movement.”

It is correct to celebrate the elimination of the segregationist banner from public buildings, and Jackson was quick to offer credit to Gov. Nikki Haley, who even if under political pressure, did the right thing. She’s already on the receiving end of vicious hostility and violent threats for her trouble.

The joy will and should soon end, Jackson insists, if America fails to understand the difference and make the distinction between “symbolic change and social change.” “It is good that the flag has come down,” Jackson said, “But now the flag agenda must come down with it.”

The real threat to social justice and beloved community is not the flag, but the agenda it advertises. Parading with pride after the erasure of the flag from the public aesthetic risks making that agenda more dangerous. It becomes not only racial harassment and economic exploitation, but racism and exploitation with a human face.

“The economy and culture of the confederacy is about separation, and the separation protects their (the ruling class) economic advantage. The rules lend themselves to that,” Jackson explained, making the connection between public theater and public policy.

In the delineation of a contrast between American myth and life applicable to the entire country, not just the Southern states, Jackson posited, “A real meritocracy is only possible when the playing field is even, rules are public, goals are clear, referees are fair, and score is transparent.”

Slavery was not only a system of cultural supremacy, but “economic supremacy.” “In 1870, we were supposedly free with the right to vote, but the infrastructure was still in place to destroy us,” Jackson said before making the point of Douglas Blackmon’s essential text, "Slavery By Another Name." Slavery was illegal, but black life became criminal, and black prisoners became prison laborers. Meanwhile, various voting laws made it impossible for newly emancipated blacks to exercise their civic right.

“Under slavocracy, the slave owner kept the slaves alive because they were worth something to him. Lynching was the dark side of democracy,” Jackson said. “If there were 10 slaves, but only one slave owner, the slaves had more votes, and were therefore politically dangerous.”

Politics under the noxious regime of slavery and under the nominal promise of democracy is about access to wealth and resources. Despite obvious progress, the flag agenda persists in ways less violent and more subtle, because the beneficiaries of inequality still must protect their plunder and loot.

“When the Supreme Court decided Shelby County v. Holder, and revoked sections four and five of the Voting Rights Act, they once again removed the troops, just like after Reconstruction. When the troops leave, tyranny and terror enter,” Jackson offered as explanation for how “voter suppression schemes” constitute a large part of the “flag agenda.”

Voter identification requirements, especially those that are dichotomous such as the Texas regulation allowing voting with gun owner’s identification but not a student ID, and the elimination of ballot boxes from college campuses, help to create and preserve a system of inequality. When black officials are elected in the South, Jackson explains, they are forced to the “back of the legislative bus” – “Stacking and packing of districts in which gerrymandering puts blacks in the districts with the fewest resources renders them powerless.”

Preventing high voter turnout, depleting the political energy of black officials, and pushing white liberals out the door into white, conservative districts not only strips democracy of its dignity, and furthers economic inequality, it resurrects secession by allowing for the nullification of federal legislation. “The flag agenda is turning down money for Medicaid when 350,000 people in your state have no health insurance,” Jackson said, referring to South Carolina’s rejection of $4.1 billion in funds that would make President Obama’s Medicaid expansion possible in that state.

Meanwhile, as right-wing politicians preach the importance of personal responsibility and academic achievement as the sole solutions to privation and inequality, South Carolina State University, the state’s only publicly funded historically black college, is facing shutdown from the state Legislature.

South Carolina is hardly alone in its embrace and execution of the flag agenda. Alabama also rejected the Medicaid expansion, voter suppression is taking place in all the former segregationist states, and the poor are continual targets of abuse and neglect most consistently and ironically in the region most boastful of its Christian piety. In that respect, "the Civil War never ended,” as Jackson put it. The flag agenda not only dominates the South, but perhaps even more pernicious, invades Union territory.

According to a recent report from the ACLU, Chicago, where the headquarters of Jackson’s organization, Rainbow/PUSH, is located, is the stop-and-frisk capital of the country. Illinois is currently facing a budget crisis, and its new right-wing governor, Bruce Rauner, has proposed billions of dollars in cuts to social services. Indiana, Wisconsin and Michigan have all undermined unions and undercut worker protections under the euphemism “right to work.” The South lost the Civil War, but the flag agenda of the neo-Confederacy, despite the shredding of its symbol, is winning battle after battle below and above the Mason-Dixon line.

Jackson, despite the obstacles of oppression in place in his birth state and his long adopted home state, took a combatively hopeful tone in our conversation. “South Carolina must decide if the massacre is a moment of embarrassment or transformation.”

“There is power in the blood of the innocent,” Jackson said, shifting back to his role as reverend. “It has transformative power.”