"True Detective" recap: Internal investigations and the shoot-out of the century 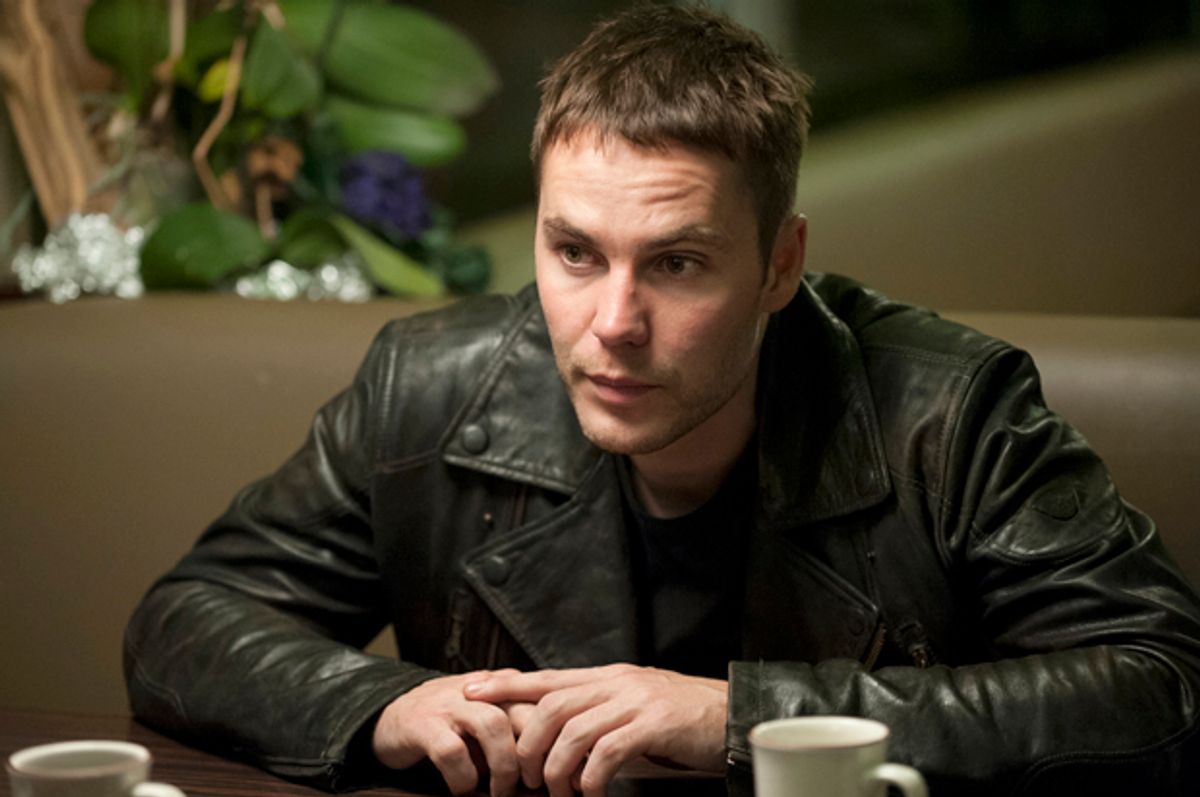 The end of “Down Will Come” is compelling stuff, yes. But the path leading to that denouement is a lot of aimless, grinding sorrow—all mood, no story. I watched it twice, the second time to try to pin down some of the plot points, and though it was easier to connect the dots, the characters’ conversations are so oblique and faux-poetic that I have to agree with Slate TV critic Willa Paskin, who observed on Twitter, “They might as well be doing Charlie Brown ‘wah wah wah’ for clarity.”

The result is a lot material from “True Detective” that sounds like a parody of itself. There are too many moments in this episode that exist only to further an overblown, trying-too-hard posture of Seriousness. Such as little throwaway lines like “mow the lawn, I don’t want those kids getting snakebit,” presumably extant because the audience must understand that Frank’s murderous intent comes from a place of concern for “the children.” Or the motivation of whole character arcs—Paul’s story in this episode is almost comical in how overwhelmingly macho he’s attempting to be, but his spiral is played for the grittiest, most serious emotions possible. Everything must be fundamentally awful and deeply disappointing, exacerbated by the clear affection of his ex-lover and the clear disinterest of his pregnant ex-girlfriend, with her inspiring “I guess I love you.” I almost laughed aloud when she announced that she did not believe in abortion; of course she doesn’t. “True Detective” demands moral absolutes in order to derive meaning from its relentless, grinding sorrow.

Paul’s angst is just not very interesting on-screen, regardless of what it is. It’s a little difficult to sell a “Brokeback Mountain” level of repression and coming-out anxiety in the state of California in 2015, and either the script or Taylor Kitsch fails to make Paul’s turmoil land for the audience. It’s hard to feel too sorry for a guy who wakes up in the beginning of this episode from what is presumably a night of a lot of drunk sex—the result of a booty call that occurred just hours after Paul punched the other guy in the face, if you’ll recall. Add the pregnant ex-girlfriend and Paul’s living in his own special romantic comedy, complete with screwball subplot. If only he could enjoy it. I assume there’s some good reason that he can’t, and it has something to do with going super-fast on a motorcycle (and then losing that motorcycle when he goes off to have sex with his handsome ex-lover; you guys, maybe the motorcycle is a metaphor), but damned if I can tell you concretely what any of his issues really are.

Meanwhile, there’s Frank, the poet laureate of Vinci. He’s got a nice way of talking, Frank, but in “Down Will Come” I began to wonder if he only exists to be as overwhelmingly macho as possible. In the first few episodes of this season, I was interested in how the Semyon marriage was oddly functional and stable, as compared to Paul, Ani, and Ray’s tumultuous love lives. It was a little disappointing to see Frank turn into a largely uncaring spouse for so much of the episode—it was a move towards rote antihero plotting that felt quite predictable. But then, Frank’s character as he’s investigated Casper’s death has been a spiraling out of every antihero trope imaginable, as he has a meltdown about how he can provide for his family and secure a legacy for future generations. But he does all of this in unimpeachably badass ways: He fights, negotiates, gambles, drinks tea; he counsels the downtrodden and strongarms the bad. He is the James Bond of the greater Los Angeles area; his storytelling exists mostly to blind us with his coolness than to make any kind of point.

Ani’s a lot more textured than the male characters, but her story appears to be equally aimless; I glazed over a bit during the mom backstory, which included some discussion of auras, mood rings, polishing driftwood to steel, and a fascinating discussion from a sex worker of how she’s not a “real” “bad” “whore.” Ray Velcoro has quite grown on me, now that he’s stopped drinking, but he’s also the episode’s dead weight—pulled along from subplot to subplot with the more dynamic characters, save a little throwaway scene where he hands off his dad’s badge-cube to his son. He gives a pep talk to Paul and is the source, in some ways, of Ani’s further-range musings. He’s the only one of our protagonists who seems to have come to terms with the extremely crooked nature of politics in the suburbs of L.A. Indeed, his scene out at the contaminated land near Fresno with Ani was the most this season of “True Detective” has felt like last season—it offered a whiff of that same practicality, of a partnership forged by necessity.

It leads me to what I think is missing from this season of “True Detective,” and that is a little bit of that hardboiled detective procedural fiction that tends to keep an atmospheric piece like this anchored to the ground. There’s a lot of theme in this season of “True Detective,” but not a lot of moment-to-moment motivating plot, that type of thing that holds episodes of TV shows together. Our heroes are exceptional mostly for being fucked-up; they’re not especially good investigators or particularly strong fighters, and they barely make a better team together. It’s hard to tell why we’re watching them hang out, most of the time—the four individual stories rarely weave together enough to justify the multiple perspectives.

The enormous gunfight at the end of “Down Will Come” is the first glance we’ve gotten of something more coherent tying together the individual threads of this show. The firefight offers a tense, long sequence of these cops actually fighting crime together, instead of just trading barbs about e-cigs; what interested me was that the three of them are good at it. Everyone else on that scene dies. The freeze frame at the end of the episode offers a glimpse of the three of them, out of their minds with adrenaline, trying to face the carnage they’ve both witnessed and instigated. The heavy moments right after the shooting ends, where first Ani and then Ray let waves of exhaustion and terror and pain hit them, after sustained minutes of anxiety, were some of the finest moments of this season so far.

It’s strange, though: It’s hard to keep track of exactly who and why the cops are gunning down this group of people; there’s some probable cause with regards to a pawned-off watch, but a warehouse invasion became an explosive, multi-vehicle disaster. The people being shot at are the almost nameless and nearly faceless Latino men—they’re identified as Mexicans, but the term is so loosely thrown around that it seems possible it’s also “Mexicans.” The episode contrasted these men with the bottom-tier workers in Vinci—the transients living in a converted hotel; the food packers lobbying for better transit conditions. There might be a point there. But right now the takeaway is rather awkward—with a cast of four white leads, to relegate the “Mexicans” to purely extras, either poor or criminal, does a disservice both to Mexicans, “Mexicans,” and the story of “True Detective,” which could use a little bit more self-awareness.

I have a theory that might mitigate that lens. W. Earl Brown’s character Dixon—Ray’s partner, shot and killed in the firefight—was coded from the start as being in collusion with the higher-ups at Vinci, and the tip on the gang came from his own former informants. Given how lazy we know him to be, it was strange to see him jump on the initiative to get that particularly group of criminals arrested. Furthermore, the criminals looked entirely prepared for the approach of multiple police; machine gun fire followed quickly by an explosion seems like overkill for standard sentry work. And then there’s the damning evidence from the Vinci officials themselves, who kept telling Ray they wanted a nice pimp to pin this murder on. The pawn-shop lead got them a tenuously connected pimp. Maybe Vinci’s top dogs used Dixon to steer three troublesome cops into the path of a troublesome gang, hoping the whole thing would end with everyone dead. Maybe they didn’t anticipate our three cop heroes would survive, or that it would go as far as it did. And maybe they were counting on the media’s inability to separate one brown face from another, especially when crime or wrongdoing is on the line. It’s the kind of street-level violence that would make national headlines for days—but perhaps Vinci’s higher-ups are looking for some smoke and mirrors and easy goodwill, to hide the rest of their plots in plain sight.