Women-shaming and race issues at Miss USA: A pageant designed to embarrass women and make them go viral 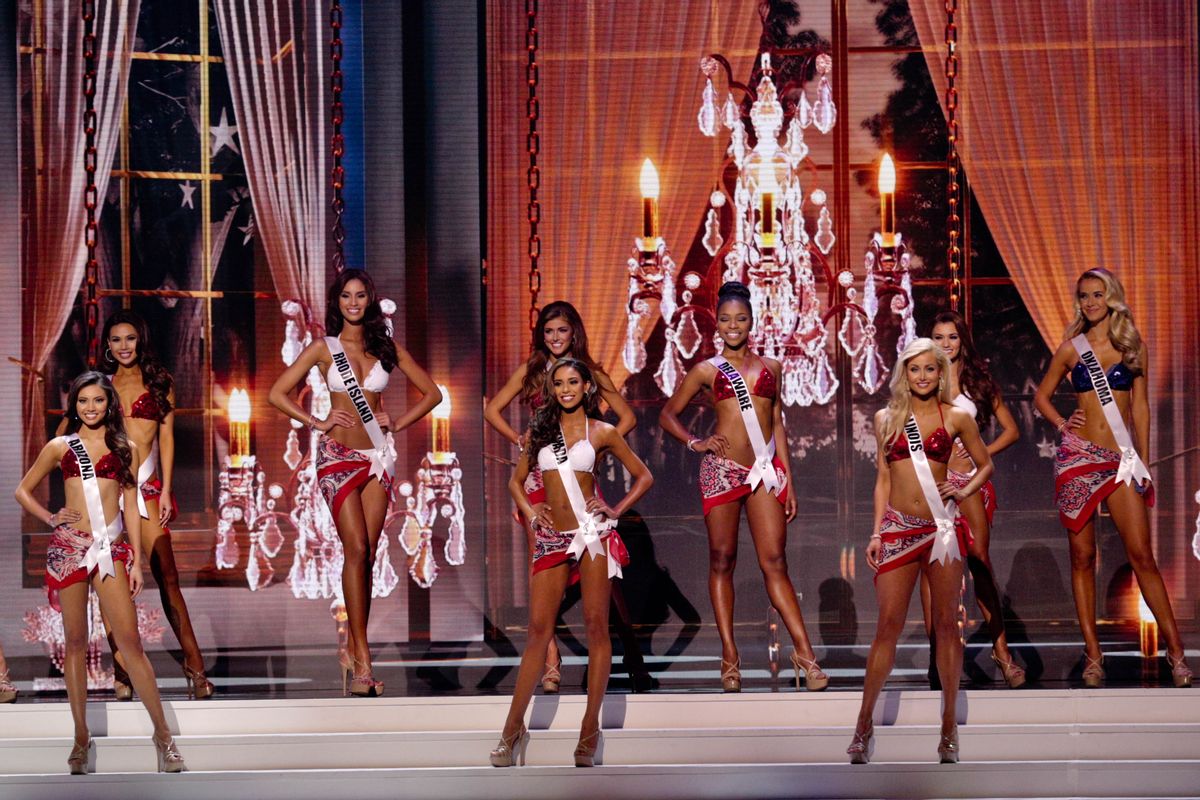 I didn’t watch the Miss USA pageant last night on Reelz, in which Miss Oklahoma, Olivia Jordan, won. But I don’t need to have seen it in order to observe that we seem to take so much glee in the onstage flubs by contestants during the question and answer period, you’d think they were the main source of entertainment, the reason for the pageant’s existence under the masquerade of bathing suit strutting. I couldn’t help but notice the difference in style and substance between the questions asked of contestants generated by the pageant and by viewers.

Among the former were “Last year, CEOs in the United States made around 300 times as much as the average worker salary. Should the government impose boundaries on salaries of executives?” and “The United States has agreed to formally reopen its embassy in Cuba. Do you think this change will be a positive one for both countries?” while the audience generated question was “In the year 2020, a woman will appear on the $10 bill. Which American woman would you like to see on the first printing of the bill and why?”

It’s then perhaps not surprising that the question most relevant to these women’s everyday lives, not to mention the one most amenable to an extremely short response, about the ten-dollar bill, received the most thoughtful answers. Which brings us to the question of why these questions exist at all. Under the glare of the spotlight, on national TV, how many of us would be able to churn out a snappy sound bite of an answer to questions our government and society have been grappling with for decades, if not centuries? A cynical person might suspect that the point of the general line of questioning was in fact to get contestants to flub answers that will quickly go viral online. It seems extra cruel to then have newscasters repeat the worst answers, when they at least have the luxury of reading off a teleprompter. There’s a level of schadenfreude to the flubs overtaking the winners in reports of the pageant that doesn’t sit well with me.

It’s not as if these women are, like Miss USA co-owner Donald Trump, running for political office. But since every year there’s at least one, if not multiple, cringe-worthy responses, it seems as much of a gotcha moment as asking celebrities if they’re feminists, then judging them harshly whether they say yes, no or maybe. Just as the star feminist interview question has gotten so watered down as to be practically pointless, as numerous critics have concurred, perhaps it’s time to either give pageant contestants a little more time to answer deep questions, a little more preparation, or allow them to offer the platform of their choosing.

As Anne T. Donohue wrote at Refinery29, “If Miss USA is supposed to embody the supposed best parts of the United States, it’s interesting that only 15 minutes is allotted for questions and answers, and two hours are reserved for bodies and gowns.” After all, if they win, they won’t need to have talking points about the day’s headlines, but rather, “The titleholders spend their reign representing their platforms, raising awareness and funds for charitable alliances, and traveling,” according to the pageant’s FAQ—not answering questions worthy of a world leader.

So while I agree with the new Miss USA that “we still need to talk about race relations in this country,” at the end of the day, those are pleasant words that aren’t necessarily going to spur anyone in serious action. After all, who could argue with her (except, perhaps, Trump), that, “We really need to work on being an accepting society and being a society where every single person, no matter your race, no matter your gender, is given the same rights and privileges and opportunities.”

Yet racism isn’t just about pretty platitudes, and fixing it requires both actions and words, and recognition of white privilege and its role in racism. This is especially relevant since one of Jordan friends and supporters, Miss Florida 2014, model Brittany Oldehoff, Tweeted this last night before Jordan was crowned: “Lol watch them give it to Texas because of ethnicity. I will just die... Olivia this is yours,” referring to Miss Texas Ylianna Guerra, who was crowned runner up. That’s the kind of racist attitude that leads to affirmative action cases like Abigail Fisher’s—and is clearly not something that’s going to be undone overnight, or over the course of a three-hour pageant.

Three years ago, Amy O’Dell wrote at Buzzfeed about the Miss USA pageant: I wish the question portion demanded more of the ladies’ intellect and less of their ability to stare blankly at the camera like stunned deer.

But the masses don’t want to watch someone take an SAT to prove their brains. That’s not good television. And why would the pageant bother trying to make the show smarter when millions of people watch it as is?

Yet this is a two-way street. Simply asking harder questions that these women may or may not be prepared to answer doesn’t showcase much except their fear and nerves. If the pageant truly wanted to share what these women thought about the news and how it affects their lives, they could find ways for them to present their opinions without putting them on the spot in a way that seems guaranteed to make at least one of them produce an epic fail, reinforcing the stereotype that they are more focused on beauty than brains.