In five short years, Walker has transformed a historically progressive state into a Southern-style "Wis-issippi" 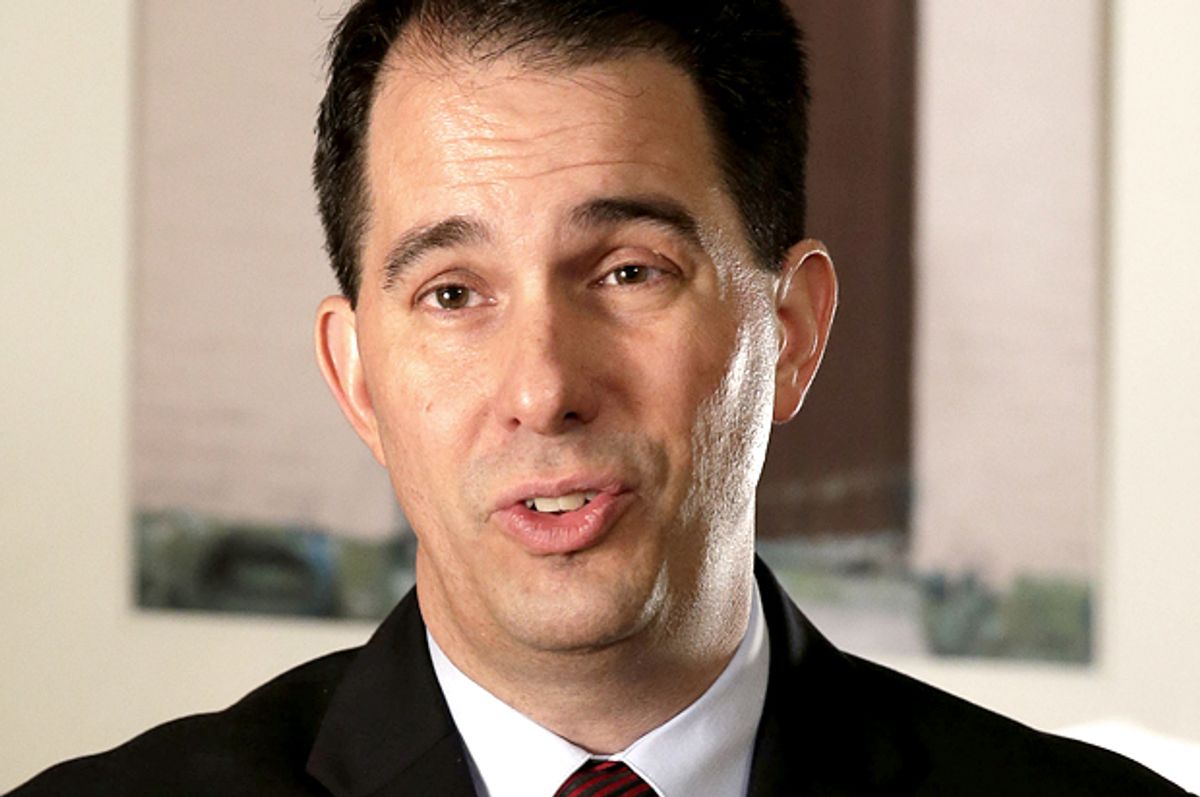 Wisconsin Gov. Scott Walker will officially launch his Republican presidential campaign from Waukesha County, the nation’s “highest-performing” GOP county in the U.S. during the 2012 presidential elections.

But the zealous response Walker will generate in the cocoon of Waukesha County cannot conceal the fact that his larger Wisconsin launching pad is increasingly unstable as his right-wing experiments are failing and alienating an increasing share of the public.

Nationally, Walker’s harsh anti-worker and anti-public education stances have earned him heroic status nationally among the GOP’s hard-right base and some members of the Republican donor class.

But Walker’s long-term project of converting the historically progressive state into a Southern-style low-wage “Wis-issippi” in the eyes of his critics is increasingly unpopular in Wisconsin, especially as he campaigns out-of-state for the 2016 nomination..

As David Poklinkoski, president of Local 2304 of the International Brotherhood of Electrical Workers, has noted, “Wisconsin has become a kind of laboratory for oligarchs to implement their political and economic agenda.”

Walker’s “laboratory for oligarchy” vividly shows what a Walker presidency could impose on America.  Here are four key policy areas where experiments conducted by Walker reveal his agenda and character:

1. Leads all-out war on workers, but fails to generate jobs and higher wages: In recent months, Walker has intensified the assault on workers, the poor and most vulnerable with punitive new laws and provisions of his new two-year $73 billion state budget. Since taking office, Walker has been staging this relentless war on worker rights and wages, despite already-declining household incomes—especially sharp in Wisconsin-- and the shrinkage of union power.

• Walker’s attacks on union rights build upon his 2011 “Act 10” which simultaneously abolished almost all collective bargaining rights of public employees to union representation and drove down the take-home pay of public employees by over 10%. These attacks on public employees clearly carried a sub-text of white antagonism toward African-Americans and Latinos, argue professors Hannah Walker and Dylan Bennett because of minority workers’ concentration in the public sector and the economic anxieties of whites.

• This spring, Walker’s signed a new anti-union “right-to-work” bill—contradicting previous promise to labor leaders and the public—that will surely further weaken the already-limited bargaining power of private-sector unions. The aim of this bill, with deeply racist roots, is to drive union membership in Wisconsin to Southern-style microscopic levels.

•  Walker’s new state budget severely weakens “prevailing wage” protections for construction workers on public projects, outright elimination of the living wage concept which had been central to setting the state’s minimum wage, and the erosion of tenure and layoff protections for UW faculty.

•  Walker’s anti-worker attacks and lavish corporate subsidies handed out by his newly-privatized and scandal-wracked Wisconsin Economic Development Corporation have failed to produce the family-sustaining jobs long promised by Walker.  WEDC has been involved in providing funds for major firms shipping family-supporting jobs to offshore sites, along with aiding major Walker donors.

• He also has attacked the ‘living wage’ concept in state law. The new budget eliminates entirely a requirement that the governor consider what constitutes a“living wage” in working to establish an appropriate minimum wage for Wisconsin. Wisconsin’s minimum wage in the Walker years has been stuck at the $7.25 federal-set level, while 29 states and numerous cities have enacted far higher minimums ranging as high as $15 an hour.

The results have not helped the public. Examining both job gains and losses, Wisconsin’s drop in middle-income jobs have meant that only “low-wage” jobs have been increasing 2010 to 2013, according to Census Data. Even these undesirable jobs have been slow in arriving, with Wisconsin ranking 35th in job creation under Walker, as Politifact reported that the total number of jobs created under his administration was just 111,295, despite a 2010 pledge of generating 250,000 jobs in his first four years, which was central to his 2010 campaign.

Notably, state income growth has been terrible. Perhaps most painfully-experienced has been Wisconsin’s drop in household income as outlined in a Pew Research report released in March. Summarizing the findings,Capital Timesreporter Mike Ivey noted, “Wisconsin ranks worst among the 50 statesin terms of a shrinking middle class, with real median household incomes here falling 14.7 percent since 2000.

Wisconsin’s loss of household income amounts to more than double the national average drop of 7.2% according to the Pew report. While Walker cannot be held responsible for all of the trends underlying the fall in household income, Wisconsin’s economy has consistently lagged behind both Midwestern states and the nation, as Prof. Marc Levine has documented.

2. Undermining Wisconsin’s prized public education system. Public education in Wisconsin has ranked as among the best in nation, where it is widely viewed as a foundation of a democratic society. However, since in office, Walker has sliced funding for K-12 schools while consistently boosting funding and loosening standards for privatized voucher schools. He has also widened his attack by orchestrating a “hostile takeover” of powers held by the democratically elected Milwaukee Public School board, by usurping and transferring them to neo-liberal County Executive Chris Abele. He has also lowered the standards for teachers, with the new state budget eliminating qualification requirements for hiring teachers.

Walker hasn't stopped there, however. He's taken his anti-union agenda to the state university system, where he has tried to recast it as a narrow pathway serving ould-be employers and not a center of academic inquiry. He's tried to replace a century-long university mission of the search for truth and public service with a narrow, pro-corporate new vision of “providing state workforce needs.” While Walker initially claimed that he and his staff had no role in this proposal, media investigations showed the direct intervention of his staff in pushing the new budget language.

Walker also is imposing $250 million in budget cuts on the highly-esteemed University of Wisconsin system, ranked 19th best in the world. Other provisions call for virtually eliminating tenure and strengthening university administrators’ power over faculty, which is pandering to the long-held right-wing gripe that universities are hotbeds of liberal thought. Among the already-emerging results are older faculty seeking to flee UW and promising young professors steering clear of UW because there is no guarantee of tenure.

3. Less accountability and transparency. Walker's latest gambit to impose government secrecy has ignited a furor. Some of the most controversial features of the budget were prepared secretively and quickly rammed through by Republican allies in late-night meetings of the GOP-dominated (12-4) Joint Finance Committee. Even far-Right Republican Attorney General Brian Schimel denounced the tactic and substance, which include narrowing open record laws. He said, "Transparency is the cornerstone of democracy, and the provisions in the budget bill limiting access to public records move Wisconsin in the wrong direction.”

Walker, meanwhile, has acted with impunity, by insisting on secrecy for his records, as if the provision were already in effect. Yet, a  near-universal wave of opposition forced withdrawal of this proposal tucked into the budget.

4. Humiliating and harming the vulnerable: The meaning of a Walker presidency was vividly made clear by his budget and recent laws he has signed. Looking at elements section by section reveals his harsh values and the agenda he would seek to impose in the nation if elected president.

•  Attacking environmental protection. Numerous Dept. of Natural Resources scientists will be laid off, thereby silencing highly-credible analysis and criticism of his policies on air and water safety.

• Rolling back abortion rights. A key new item added to Walker’s right-wing checklist is a draconian 20-week limit on abortions without regard for rape, incest, or health of the mother.

• Expointing the poor. The budget expanded the range of services permitted for the exploitative payday loan industry, notorious for the onerous high-interest rates extracted from the poor, especially blacks and Latinos.

• Humiliating public assistence recipients. He has required drug testing for food stamps and unemeployment insurance recipients.  The federal government has moved to block such testings. Experiments in South Carolina and Florida showed a miniscule rate of drug use by aid recipients. Yet Walker persists in promoting this humiliating and insulting proposal.

Viewed as whole, the Walker-Republican budget combines a set of highly-regressive economic shifts benefitting corporations and the wealthy at the expense of workers with a host of anti-democratic measures ranging from weakening faculty involvement in university decision-making to re-shaping non-partisan state agencies to give them a profoundly Republican tilt.

The Public Isn't Buying It

But ominously for Walker, his personal approval rating has fallen to an all-time low of just 41% as of mid-April, according to a poll taken in April by MU Law School.

Walker has only deepened public disaffection with his continuing long absences from the state while intensely campaigning for the GOP nomination, which have consumed about 44% of his time in recent months. Walker’s disapproval rating has thus climbed from 48% in October 2014 to 56% in April of this year.

Walker, despite fairly narrow election victories of about 53% to 47% in 2010, 2012, and 2014, nonetheless feels a strong incentive to convert Wisconsin into a laboratory for rightist policies as part of his presidential campaign. His policies fit in with his long-standing goal of mobilizing a right-wing for 2016's Republican caucuses and primaries.

He and his GOP legislative allies can act with impunity because their highly secretive and partisan re-districting virtually guaranteed legislative domination into the future. In 2012, the Democrats won 60% of votes for the State Assembly but won only 39% of seats.

Walker has used the power of his office to impose his vision of a “Wis-issippi” with low wages, minimal corporate taxes, widespread crony capitalism, and a depleted public sector. This is the legacy he has brought to Wisconsin ad would seek to impose on the nation if his presidential aspirations are successful.