Alex Jones warns listeners: The UN is a "space cult" plotting to eradicate humanity by making our children gay 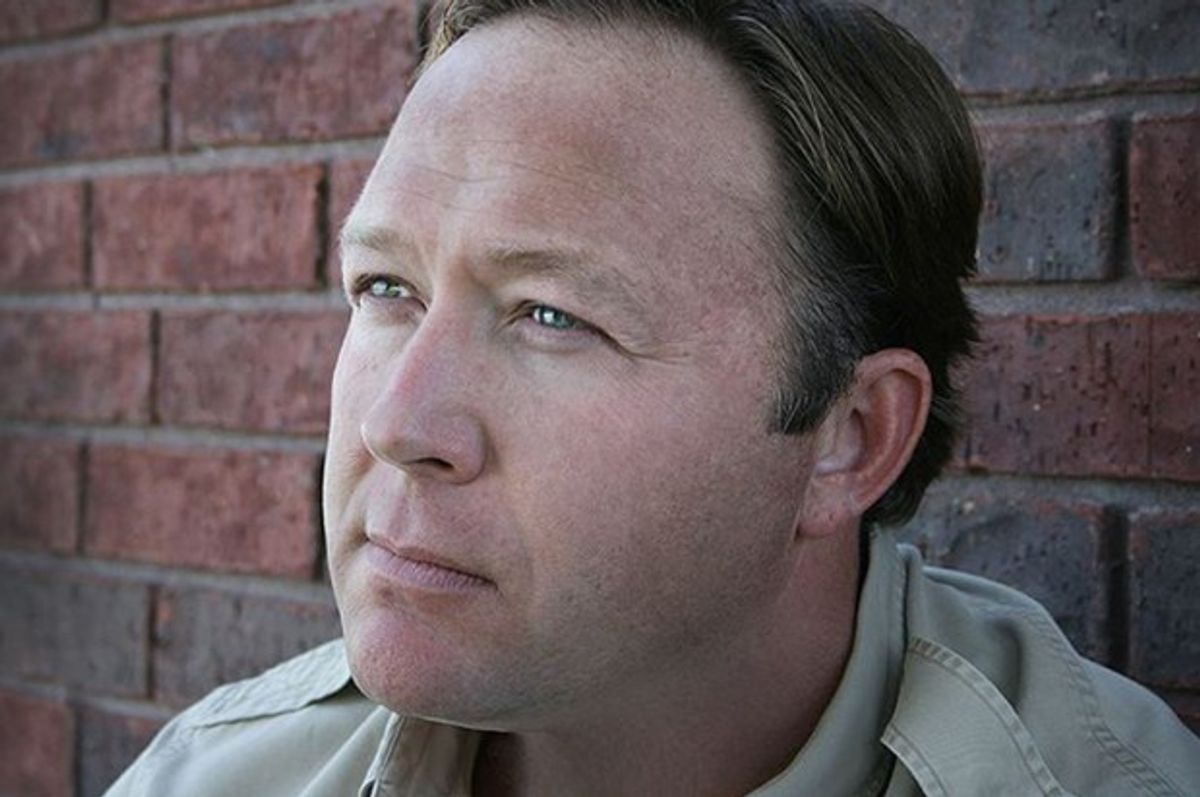 Most conspiracy theorists happen to be somewhere on the libertarian spectrum. It's why there's a creepy overlap between the universe of radio conspiracy-monger Alex Jones and the dual universes of both Ron and Rand Paul. In fact, Rand Paul has been a guest on Alex Jones' show, and Jones appears to support Paul over the rest of the GOP presidential primary field. Simply put: The libertarian fear of big government translates easily to believing that big government is also doing horrendous and secretive things to the people, such as poisoning us with chemtrails or destroying towns with tornadoes controlled by weather weapons.

The government and its long list of ongoing conspiracies is precisely the excuse Jones uses to square his live-and-let-live libertarianism with his raging homophobia and transphobia. For example, Jones insists that homosexuality is being manufactured by the government, which is actively targeting children with gay-inducing juice boxes. Jones insists that the government is mandating that juice box manufacturers include "endocrine disrupting chemicals" in the packaging of their products in order to reduce the testosterone of male children, thus somehow turning them gay. Of course, Jones hopes that his listeners aren't savvy enough to recognize that there's no correlation whatsoever between low testosterone and homosexuality.

But the facts don't really matter when you're selling snake oil. By the way, Jones literally sells snake oil, too. It's called "Super Male Vitality," one of many dubious weight loss and testosterone-boosting products. We'll circle back to this.

Flash forward to Jones' Monday program. The host launched into a polyp-throated rant about same-sex marriage, but only after noting that he doesn't like to talk about it because it's a "distraction," a "football issue" and he's "sick of it." This after affirming again that he identifies as a libertarian and that he does not "get into what you do in your bedroom." Odd, isn't it, that a libertarian would consider equal protection as guaranteed by the Constitution as nothing more than a throwaway issue. (Protecting the Second Amendment, of course, warrants a colossal tantrum. But equality is just a distraction, according to Jones.)

The real reason Jones doesn't often discuss marriage equality is because it makes him sound insane, because there's simply no credible way to square libertarianism and opposition to same-sex marriage. You either support liberty or your don't. Ron and Rand Paul, on the other hand, have done reasonably well squaring their libertarianism with their opposition to reproductive rights. Alex Jones simply isn't as clever as the Pauls. But he's definitely kookier.

Here's how Jones tackled the issue on his show. He turned homosexuality into a vast, global conspiracy, and it might be the wackiest thing Jones has said since elaborating upon the "shape-shifting lizard people from outer space."

Now the truth is, there is a movement at the UN -- there is a move to sexualize children. Sumner Redstone has said that and it's nobodies business to be trying to target children with "Heather Has Two Mommies" or "You Can't Say Boy or Girl to Somebody That May Not Identify as That."

Again, he's a libertarian homophobe. If he wasn't homophobic, he'd have no issue with Heather having two Mommies. It gets crazier.

So, wait, the UN is a space-cult? What? Also, whenever Alex Jones points to the actions of the Normals and calls it "craziness," we can assume that the Normals are doing something right.

The eugenics, trans-humanist cult wants to confuse the general species ahead of rendering us down and removing us.

This cult he's talking about is evidently a big-tent cult if it includes not only a space-cult and a suicide-cult, but also a trans-humanist and eugenics cult. It's like the food court of cults. If you're hungry, try the Sbarro cult.

The decision has been made. Cheer up, the post human era is dawning. The plan is an asexual humanoid, even if they decide to keep us around, stated in hundreds of textbooks.

Jones is convinced that the United Nations, which is ostensibly composed of humans, is trying to eliminate humans and replace us with asexual humanoids, and, if you recall how the rant began, the plot starts with sexualizing children. Yes, the process of creating asexual humanoids involves creating children who are more sexualized. Somehow.

Obviously, there's no way to legitimately parse the details of this or any other Alex Jones theory because he's just tossing together whatever apocalyptic-sounding scare words and forecasts he can successfully blurt without pausing for breath. Suffice to say, no, there isn't a global conspiracy to eliminate human beings and replace us with space-cult asexual humanoids. But if enough of his listeners believe there are, then he can sell products like Super Male Vitality. If his listeners don't believe the future of humanity is at stake, they won't buy his swag.

Jones is shoving LGBT Americans into the mix, and casting them as proto-asexual humanoids -- the globalists' first move toward eradicating mankind. In that regard, what Jones is saying about the LGBT community is actually kind of dangerous, because he's making LGBT citizens out to be puppets of the enemy, leading us to an inevitable Armageddon. Seriously speaking, it's eliminationist rhetoric like this that gets people killed. To Jones, however, that's an irrelevant matter since he couldn't possibly be held responsible for something like that, because it's only the really crazy people, as well as a lack of firearms, that get people killed. Therefore Jones can freely launch into insane rants like this all he wants with almost total impunity.