"Are you talking about me?" Rivera asked. "You're lucky that you're my friend. I'd knock you out right now." 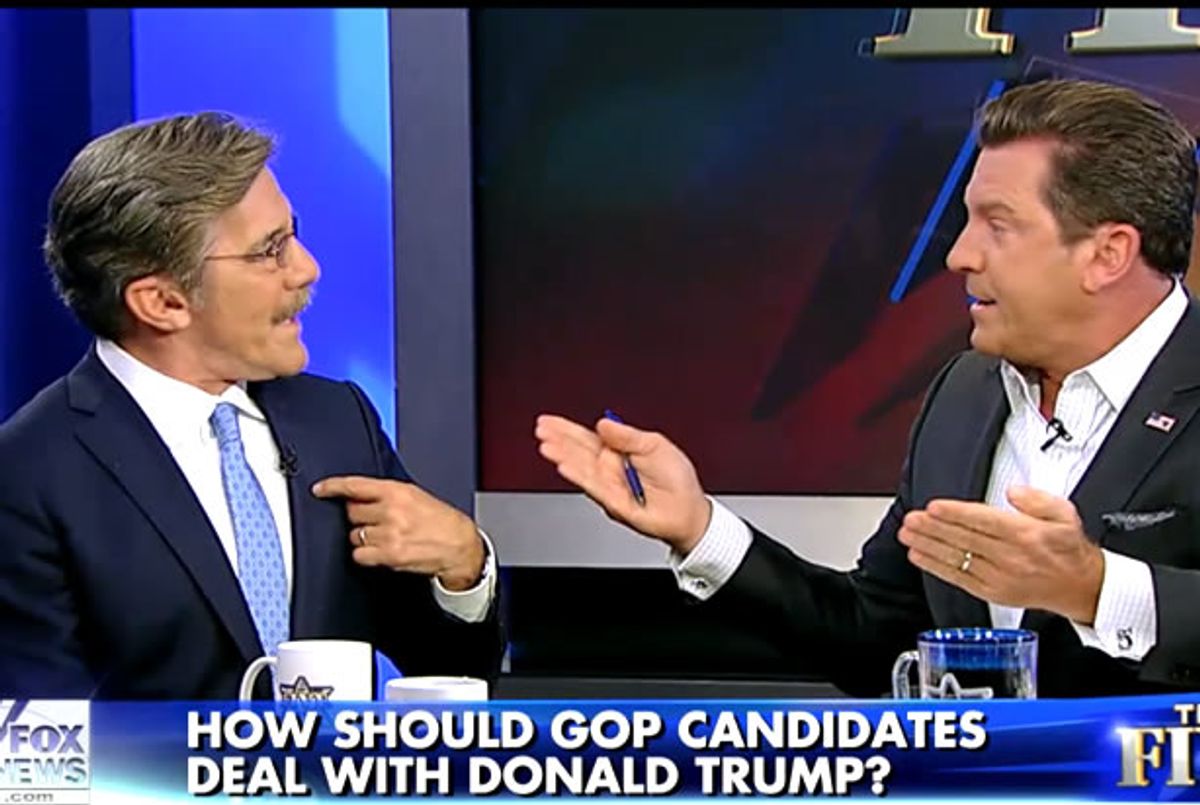 Last week, O'Reilly sent Watters -- whose roving reporter shtick typically involves mocking ignorant liberals he meets on the street, or actual homeless people, because why not? -- to San Francisco, where he proceeded to grandstand about immigration policy in a number of venues, including Mayor Ed Lee's office, where he danced in circles yelling "Are you in there?"

Watters, who was also on the show, said that "I wouldn’t want to tangle with Trump. Then he’ll just drop a nuke on you and you’ll look like an idiot. He’ll go after your looks, he’ll go after anything. And you’re just left there stuttering and it doesn’t look good."

Trump, he added, "has tapped into the red-blooded American bloodstream" -- by which he meant people displeased with "the skinny community organizer" who currently occupies the White House -- with this remarks on immigration, as evidenced by his surge in the polls.

Rivera replied with indignation at Watters' characterization of President Barack Obama, then added that Trump's position on immigration is like "a cheap drug" in which "you get a big bang, a real quick high, and a very long hangover."

"It's not a quick high when people are being murdered in California," Watters replied.

"It is the cheapest shot of all to exploit the misery of that family," Rivera said. He tried to add that using Steinle's murder to defend Donald Trump was "exploiting and sensationalizing," but Bolling cut him off, remarking that that's grand coming from someone "who exploits and sensationalizes everything."

"Are you talking about me?" Rivera shot back. "You're lucky that you're my friend. I'd knock you out right now. That's absolute B.S."

"We can take this up later," Bolling replied, pointing outside of the studio.

"I exploit and sensationalize?” Rivera asked. “What do you do? Where do you get your stuff from? What right-wing pundit has given you your script? This is her death. Her death."

The camera quickly cut to co-host Kimberly Guilfoyle, who shrugged her shoulders and shouted, "Control room! We're going to have a commercial coming up right now. It's probably a good time to roll the Bowflex commercial. I saw that in a movie once."

Watch the entire exchange via Media Matters below.