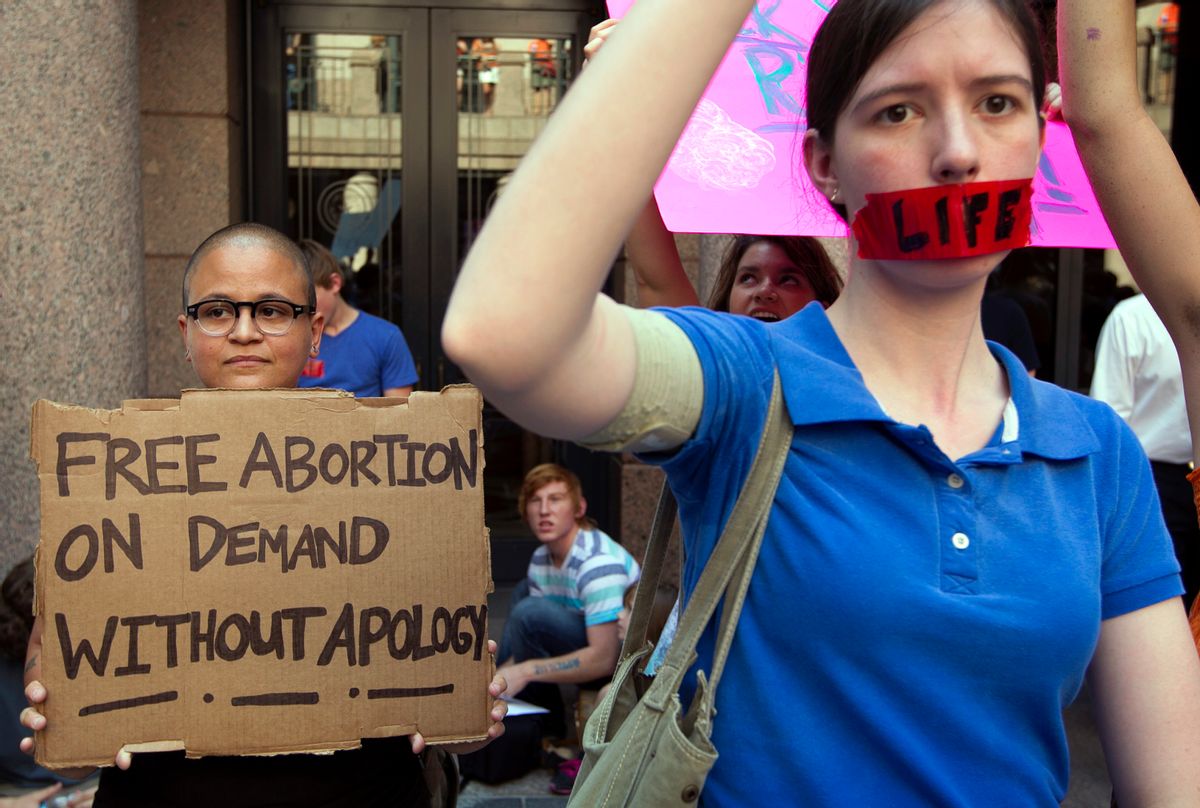 FILE - In a Tuesday July 2, 2013 file photo, pro-abortion rights supporter Yatzel Sabat, left, and anti-abortion protestor Amanda Reed demonstrate at the state Capitol in Austin, Texas. The Supreme Court is considering an emergency appeal from abortion providers in Texas, who want the justices to block two provisions of a state law that already has forced the closure of roughly half the licensed abortion clinics in the state. Ten of the remaining 19 clinics will have to shut their doors by July 1, 2015, without an order from the Supreme Court. (Jay Janner/Austin American-Statesman via AP, File) (AP/Jay Jenner/Austin American-Statesman)
--

It would be unfair to say that crisis pregnancy centers provide no benefits for pregnant women. For women who become unexpectedly pregnant but decide to carry to term, or women who cannot afford basic childcare resources such as diapers, or for women who simply need a free pregnancy test, these centers can be invaluable. For others, that's not really the case.

More often than not, CPCs -- which now outnumber abortion clinics by an estimated 3 to 1 -- can be misleading, manipulative or downright coercive, pushing a distinctly antiabortion agenda that relies heavily on lying to clients. Investigations have time and again uncovered evidence that these centers, many of which are religiously affiliated, purposely attempt to portray themselves as secular medical providers that provide comprehensive care for women facing unintended pregnancies. They don't, though, and often don't even have licensed medical professionals on the premises.

So why are so many CPCs funded by taxpayer dollars, instead of just by wealthy wingnuts?

According to a yearlong investigative report in the current issue of Cosmopolitan, there are at least 11 states that directly fund pregnancy centers, as well as one state -- South Dakota -- that requires women to receive counseling from an antiabortion center in order to terminate a pregnancy. That some states are providing tens of millions in public funding for religiously affiliated organizations -- some of which acknowledge that their primary goal is "shepherding spiritually 'broken' women toward Christ" -- isn't the only issue; Cosmopolitan also discovered a troubling funding breakdown that indicates some states are actively incentivizing antiabortion counseling.

The report explains that Pennsylvania, which first set aside funds for antiabortion facilities two decades ago, relies on the anti-choice nonprofit Real Alternatives to run its crisis pregnancy centers. The organization has been tapped to consult states such as Florida, Minnesota, Nebraska, North Dakota and Texas as they develop their own programs, and operates under a contract with Pennsylvania that reflects horrifying priorities:

Between 2012 and 2017, Pennsylvania will give Real Alternatives more than $30 million in state and federal funding to support 98 sites, including pregnancy centers, social service agencies, maternity residences, and three adoption agencies. Real Alternatives reimburses centers for services they provide women (similar to how insurance companies reimburse doctors). Real Alternatives says its sites give pregnant women comprehensive support if they want to parent. And I spoke with women who arrived at centers happily pregnant and appreciated staff's parenting advice and gifts.

But a close look at Pennsylvania's pregnancy center program shows that the government money is not going toward the things expectant women need: accurate health information, medical care, and long-term support in raising children. According to Real Alternatives' contract with the state, it reimburses a center just $2 each time a woman receives food, clothing, or furniture- a maximum of four times. That's a $24 cap for an individual pregnant woman's material needs. Centers may dispense more through donations. Still, the government program gives them the incentive to spend more time providing ideologically driven counseling- which is reimbursed at more than $1per minute- than they spend providing direct services.

Additionally, Real Alternatives requires that women receive at least 20 minutes of counseling in order to receive any sort of material benefits; Cosmo reports that the counseling often includes misguided and debunked "scientific" information linking abortion to breast cancer and depression, in order to scare women out of terminating pregnancies. Center staff are also prohibited from discussing or offering contraception, but they are encouraged to discuss clients' "spiritual needs."

The report also raises important points about the rise of state-level antiabortion legislation as it pertains to crisis pregnancy centers, and is worth reading in full. Find it at Cosmopolitan.