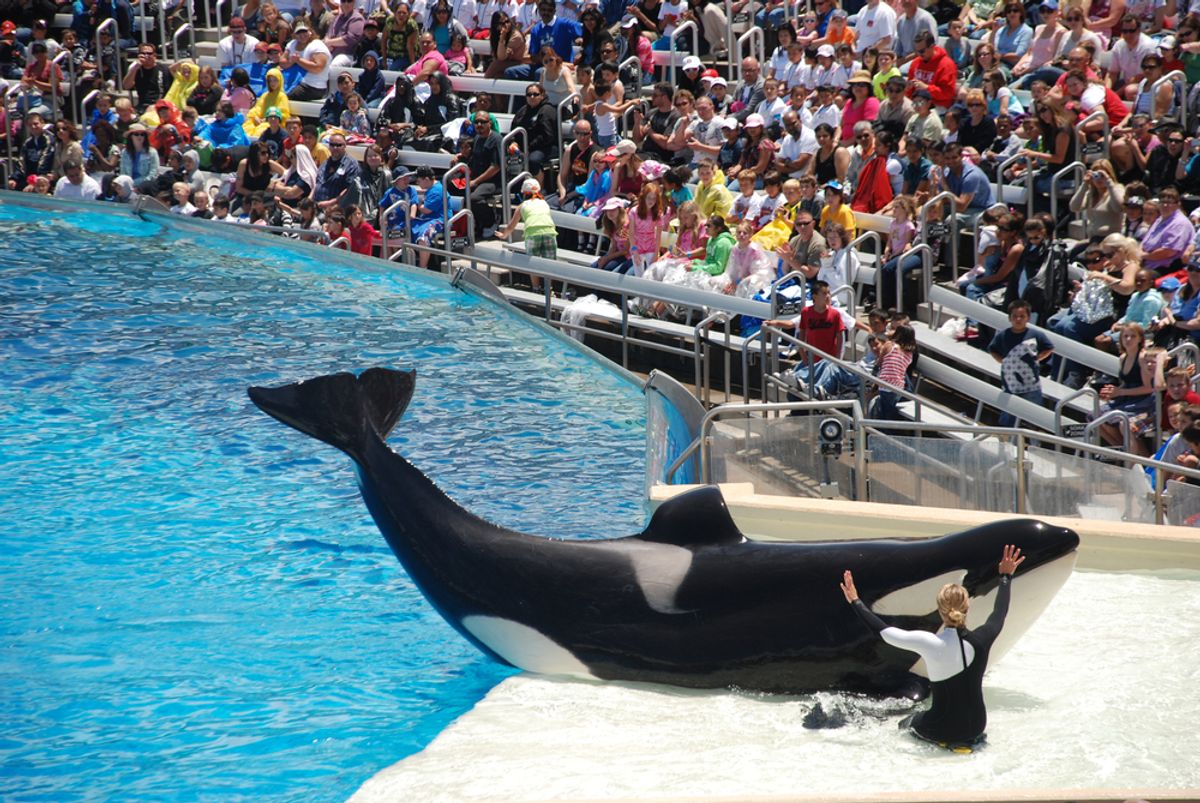 An animal activist who's threatened to "find a personal way to stop" SeaWorld and who warned the park that protestors "will burn it to the ground" turns out to have been a human resources representative employed by SeaWorld San Diego.

PETA caught onto the ruse, Bloomberg Business reports, discovering that Thomas Jones, who joined PETA's Action Team in 2012, looks an awful lot like Paul McComb, who's worked for SeaWorld since 2008.

PETA officials believe that McComb, posing as Jones, infiltrated activist operations with sneaky undercover moves like asking, “What is the big surprise for the upcoming protest. Are we going up the gates or something,” and posting calls to action to Facebook like: “Grab your pitch forks and torches. Time to take down SeaWorld." Jones would show up at protests -- he was a member of a group that tried to stop SeaWorld's float during the 2014 Rose Bowl Parade -- and was even, by all appearances, arrested along with other activists. Yet the police have no record of either a Thomas Jones or a Paul McComb being arrested that day. PETA also discovered that Jones joined the group using a P.O. Box registered to Ric Marcelino, Sea World San Diego's head of security.

In response to the accusations, SeaWorld sent Bloomberg a link to a PETA job posting for an undercover investigator.

"We are focused on the safety of our team members, guests and animals, and beyond that we do not comment on our security operations," Fred Jacobs, a SeaWorld spokesman, said Monday in a statement. "This is a responsibility that we take very seriously, especially as animal rights groups have become increasingly extreme in their rhetoric and tactics."

SeaWorld is probably aware that it's biggest critics aren't activists coming into the park and "uncovering" evidence to support their preconceived notions of how it treats its orcas. Instead, it has the most to fear from people like John Hargrove, who became an orca trainer for the park as a realization of a childhood dream -- and who became an outspoken critic of SeaWorld after witnessing how the company treated both its whales and its employees during his 14 years on the job.

"It was a slow realization. I was happy for a long time and I truly believed in SeaWorld and defended SeaWorld," Hargrove told Salon earlier this year in an interview tied to the release of his tell-all memoir, “Beneath the Surface.” But over time, he said, he began to realize that the park's orcas were suffering as a result of being held in captivity -- and that SeaWorld was lying to the public in order to keep up its image.

"The simple fact is that once you have that career and you see first-hand what captivity does to those animals, if you really love them you don’t want to see them suffer like that," Hargrove said.

Indeed, this isn't the first time the company's been accused of engaging in deception in order to protect its public image. Earlier this year, it launched a new campaign boasting that its orcas are "thriving," a claim belied by witnesses like Hargrove, other experts and court documents. And since the incendiary documentary Blackfish was released in 2013, it's been clear that anti-SeaWorld sentiment is catching on way beyond the animal activist fringe -- SeaWorld, which lost its contract with Southwest Airlines and has seen scores of celebrities cancel their concerts at its Orlando park, has a lot more to worry about than PETA.