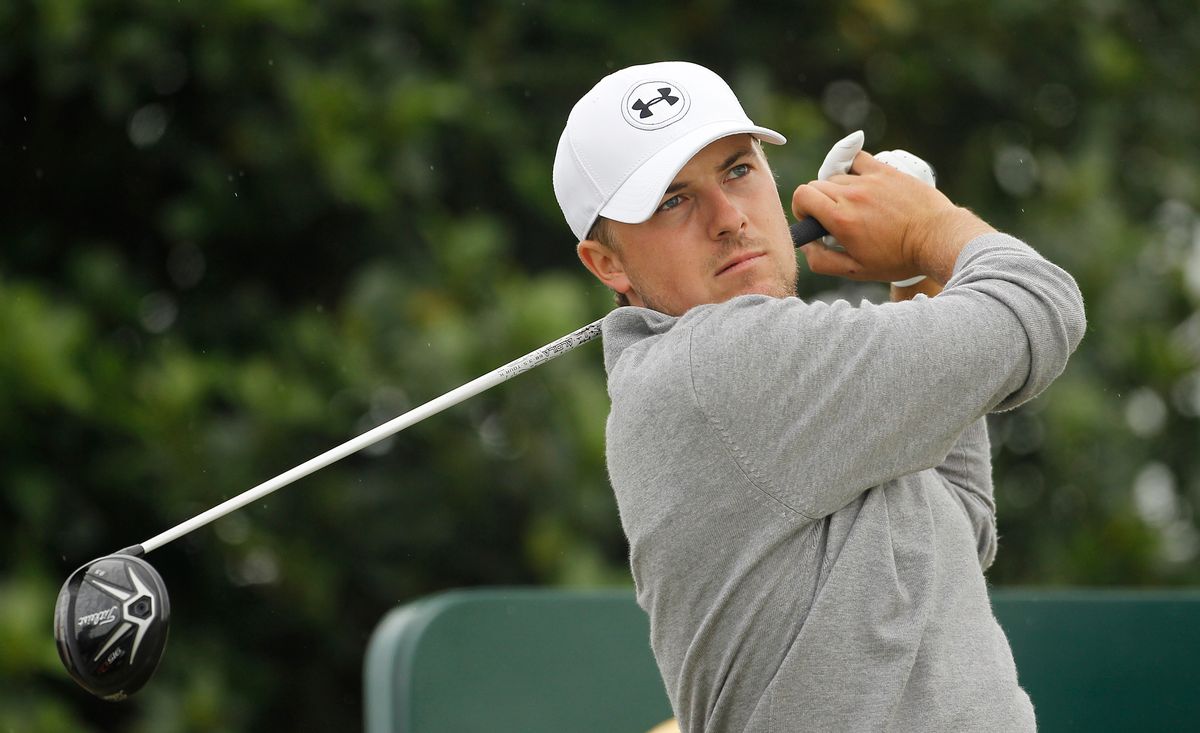 Jordan Spieth from the U.S. tees off the 3rd hole during a practice round at St. Andrews Golf Club prior to the start of the British Open Golf Championship, in St. Andrews, Scotland, Monday, July 13, 2015. (AP Photo/Peter Morrison) (AP)
--

ST. ANDREWS, Scotland (AP) — There was no escaping Jordan Spieth even before he arrived Monday at St. Andrews to resume his pursuit of the Grand Slam.

Behind the practice range, one British television network talked to any player willing to stop. After a few gratuitous questions about the weather (cool and cloudy) and the Old Course (magnificent shape), the reporter got to the point.

"The odds are against him," said Soren Kjeldsen, relying entirely on history.

Spieth is only the fourth player since 1960, the year Arnold Palmer proposed the concept of the modern Grand Slam in golf, to win the first two majors of the year. The first three were stopped at the British Open.

Palmer and Jack Nicklaus (1972) finished one shot behind. Tiger Woods was in good position in 2002 until he was blown away by the wind and rain at Muirfield and shot 81 in the third round.

Spieth only added to the hype by winning the John Deere Classic in a playoff Sunday for his fourth win of the year.

He flew on a charter flight from Illinois with other players at the John Deere Classic, arriving in Scotland about 10:30 a.m. and checking into his house before coming out to the Old Course to a quiet reception.

In need of a shave — he's 21, but yes, he shaves — Spieth and his manager walked through a group of about 100 fans who camped out near the entrance to the player lounge to get his autograph. Spieth signed everything shoved his way, turned and tossing the last item to a delighted young British boy.

The jet lag apparently wasn't an issue Monday. Spieth planned to hit balls and play nine holes if he felt up to it. He wound up going 18 holes, and the fans who hung around into the evening were in for a rare treat — Spieth playing, with Woods right behind him. Woods used to tee off before breakfast, but waited until afternoon when most of the drizzling weather cleared out.

They chatted briefly on the 16th green, and Spieth had some fun on the Road Hole at No. 17. He hit three shots out of the famous bunker, all of them onto the green. Then he headed toward the stone wall behind the road and asked a few fans still left, "Can you play it off the wall?"

He tried it four times, and didn't reach the green with any of them.

What makes Spieth different from other players in pursuit of the Grand Slam — or even Rory McIlroy, who won the last two majors a year ago, is that he does not overpower golf courses.

He just scores. And he wins. And that's what golf is all about, anyway.

"He beats you with better golf," Geoff Ogilvy said. "He doesn't beat you because he hits it further. Tiger's intimidation was that he always did something amazing. Jordan — don't get me wrong, his body of work is amazing — but he doesn't beat you with a crazy par, or a crazy chip-in from the back of the 14th at Muirfield (Village). He just beats you because he's better."

Ogilvy was asked how he would feel going into the final round two shots behind Spieth compared with going against Woods or McIlroy.

That now is in reach.

With his victory at the John Deere, Spieth is within range of his goal of reaching No. 1 in the world. He would have to win The Open this week to get past McIlroy, who is out with an ankle injury with no clear indication when he will be able to return.

"What he's doing is phenomenal," Nick Faldo said. "And he's confident. ... He's seeing the right shot, he's visualizing the shot. ... And he keeps churning out good shots. When you're doing that, you just jump back on the saddle and ride again. That's what he's doing."

Only in this case, Spieth had to first jump on a plane.

Not long after he won the U.S. Open, questions arose whether Spieth would change his schedule and skip the John Deere Classic so he could get to Scotland earlier. He never gave it a second thought.

He wanted competition at a tournament where he picked up his first win. He wasn't worried about jet lag. He wasn't interested in changing his routine for the sake of an extra practice round or two on a course that has been around as long as golf has been played.

The R&A put Spieth in the same group with Dustin Johnson and Hideki Matsuyama for the opening two rounds. Johnson had a 12-foot eagle putt on the final hole at Chambers Bay to win the U.S. Open. He three-putted for par, and Spieth was halfway home to the Grand Slam.

More than the Old Course, the real challenge is the players Spieth has to beat. One of those figures to be Johnson, who was asked what he thought about the young Texan's chances in this unlikely bid to win all four majors in one year.

"Well, I'm playing the next two," Johnson said with a smile, "so we'll have to see."