You beat Donald Trump by mocking him: GOP can shut him down by making him Rob Ford

Republicans have no idea how to handle Trump. There's only one way -- make him a laughingstock 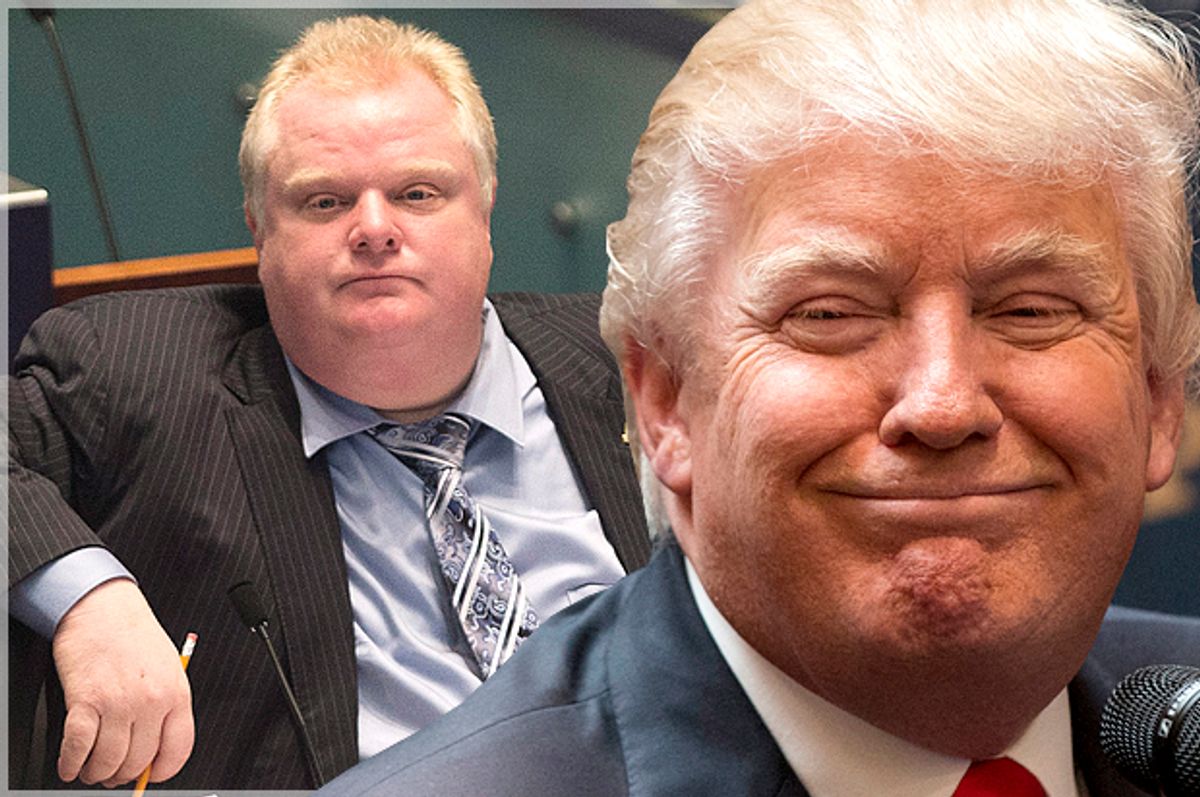 Sitting in a Long Island diner, then again sitting in JFK’s departure terminal and again when I arrived home in Canada, standing in line before customs, there seemed to be only one thing on TV: Donald Trump, spouting racist inanities.

I couldn’t help but feel I’d seen this movie before.

But rather than a real estate mogul sporting a Davy-Crockett-hat combover, what I was remembering was the nasty, brutish reign of former Toronto Mayor Rob Ford.

Americans, no doubt, will think that name sounds familiar. He went by another name in your country: the Crack Mayor, he of Jimmy Fallon and Jon Stewart infamy.

I have to wonder if Rob Ford and Donald Trump were separated at birth. Both are quotable blowhards. Both are bigots. Both are pretty idiosyncratic, memorable physical characters.

And both are electoral juggernauts.

So how do you beat them?

To Americans, Ford was a foreign joke, but he was a grating reality for us Toronto residents. Ours is a city that prides itself on social progress — the Pride parade is one of our biggest annual events, and our multicultural mosaic and middle-of-the-road sensibilities are worn as badges of honour. The city’s motto is “diversity is our strength”. Our hometown premier (ie governor) is a leftist lesbian grandma.

Ford rode to office on a populist message of “stop the gravy train”, tapping into latent anger about entitlement and politicians partying on the taxpayers’ dime. Along the way — and especially during his term as mayor with the help of his Dweedle Dee brother, Councillor Doug Ford — the Fords managed to insult everyone from Toronto’s Jewish community (“my Jewish doctor, my Jewish dentist, my Jewish accountant” raised in defence of anti-Semitic comments) to the gay community (“buck-naked men” as an excuse for not attending Pride) to autistic children, to Chinese Canadians (“they work like dogs”).

Despite all that, the scary thing this time last year was this: Rob Ford could’ve won reelection. In a crowded field, he’d tapped into an angry 30 percent of the population, and he spoke their language of alienation, tax hatred and anti-elitism. That 30 percent could’ve been enough to win.

Campaigning against the Fords was a hair-pulling exercise. A candidate who had worked months on a thoughtful white paper about innovation saw his announcement upstaged by the mayor teasing a media avail with a magician. An arm wrestle with Hulk Hogan earned more media attention than a speech on city finances. The more nuanced, policy-driven portions of a transit debate could be drowned out by whatever nonsensical or racist thing the mayor said that morning.

It was a maddening experience.

As my former boss and communications specialist Siri Agrell observed in The Huffington Post Canada, Ford (and Trump’s) seemingly mindless tirades are a “natural evolution” of an age-old media trick of “putting something in the window”, which serves “to keep political reporters busy writing about these specific things, so they have less time to poke around on their own or cover the opposition…making sure Ford's name is in the headlines and reducing the amount of coverage available for to other mayoral candidate”.

Hillary Clinton, it seems, has done a masterful job already of capitalising on Trump’s racist rants to paint all Republicans as hostile to Hispanic voters. Her “Basta! Enough!” drop-in line to a recent speech helped underscore her linking of all major GOP candidates to Trump’s antagonism.

But what is a Republican candidate to do? Jeb Bush has already tried ignoring Trump. It didn’t work.

Republicans risk guilt by association with Trump’s racist diatribes. Whereas some Toronto mayoral candidates could play on Ford’s turf of fiscal miserliness, for a Republican candidate to stray too far down the rabbit’s hole of border control risks the GOP the general election. Sure, a Republican who goes after the same xenophobes as Trump might gain a few points in some conservative primaries and caucuses, but it’s almost a truism that a Republican cannot win the White House without increasing Hispanic (and other minority) support. Matching Trump’s hysteria, even in a slightly more nuanced way, risks being a Pyrrhic victory.

There may be another way.

John Tory, in a Toronto financial district luncheon debate early last September, finally found the best way to handle a Trump or Ford character: go after him aggressively, but be funny about it. Tory’s quips to Ford about Ford even got Ford laughing at himself — a devastating political body blow. When the audience is laughing at you, your standing to make a political point is gone.

Tory made sure to have a clear, simple campaign message of his own and he fashioned himself not simply as the anti-Ford but as the consensus candidate. But the tip of the sword was the moment he got everyone in on the joke that was the Ford candidacy.

Trump, like Ford before him, is a joke. The trick — and it’s a hard one to achieve — is to break the fourth wall and get everyone laughing at the joke, to put it on full display and expose it.

Americans, for all the flaws in your politics, still have a romanticised vision of the presidency: a happy warrior, sure, but a serious, substantive leader who is trustworthy and capable. Trump cannot win if he isn’t presidential, and he cannot be presidential if he’s a laughingstock.

Jonathan Scott has worked in political communications in Canada and the United Kingdom. Follow him on Twitter @J_Scott_.