"Clueless" and the end of Gen X: How Cher Horowitz taught us to stop worrying and embrace millennial optimism, post-racial fantasy and the 1 percent 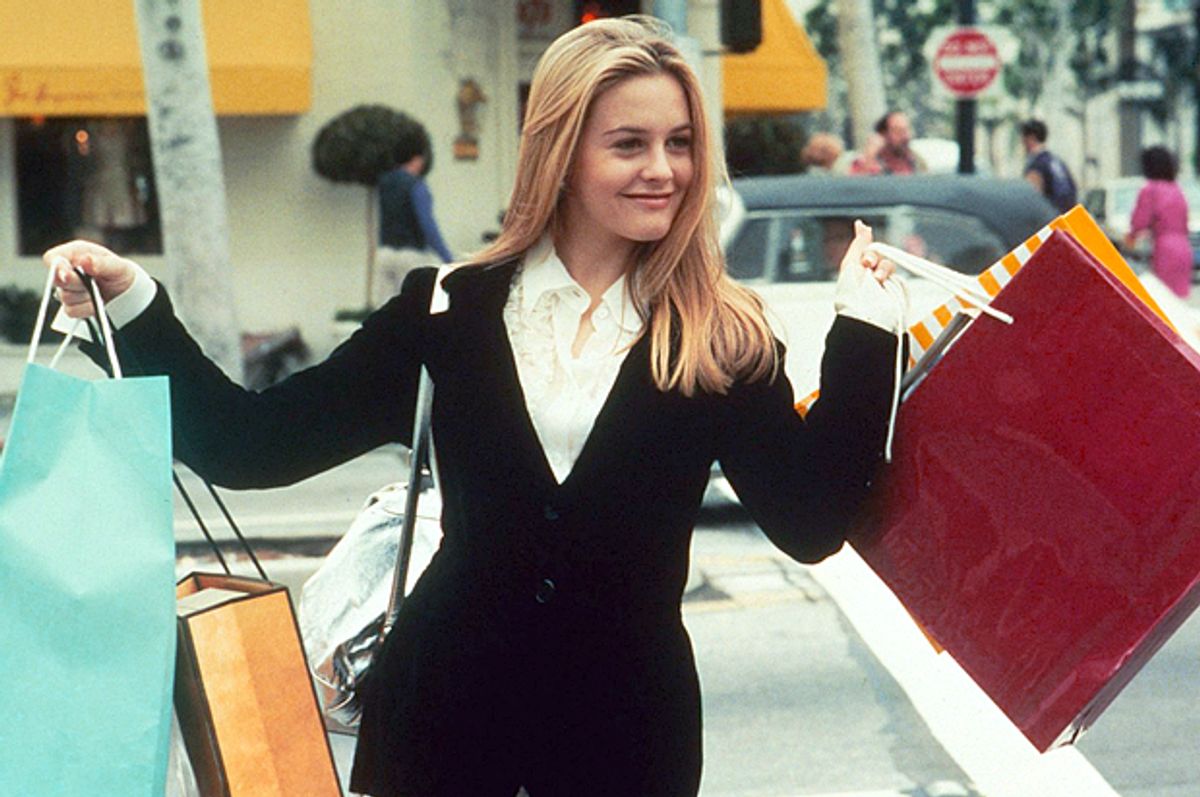 In an early scene in "Clueless," a close-up reveals the sagging waistbands of a pack of young, SoCal teens, all loping to class in the signature Generation X uniform of baggy jeans, exposed boxer shorts and wallet chains as World Party's cover of Mott the Hoople's “All the Young Dudes” blares on the soundtrack. Then Cher Horowitz’s (Alicia Silverstone) chipper, California Girl uptalk—surely the vocal fry of the 1990s—cuts through the straining authenticity practiced by the pack:

“So OK, I don’t want to be a traitor to my generation and all? But I don’t get how guys dress today. I mean, come on, it looks like they just fell out of bed and put on some baggy pants and take their greasy hair—ewww—and cover it up with a backwards cap, and like, we’re expected to swoon?”

Here, with a single toss of her healthy blond coiffure, Cher, the "Clueless" protagonist and moral center of Amy Heckerling's 1995 adaptation of Jane Austen's "Emma," dismisses the entire ethos of Generation X. As Jeffrey Sconce explains:  “X’ers have long been regarded as the most cynical, detached and ironic of population clusters.  Boomers, the logic goes, got all the good jobs and prime real estate, while Gen Y (aka, “the Millennials”) got a renewed sense of earnestness, enthusiasm, and optimism.  X marks the spot in between—those pissed off at baby-boomers for their narcissistic entitlement and pissed off at the Millennials for not being more pissed off.”

Modeled by practitioners of authenticity like Kurt Cobain, Tupac Shakur and Liz Phair, and writ large on-screen in films like "Slacker" (1991), "Menace II Society" (1993) and "Natural Born Killers" (1994), Gen X preached the gospel of flannel and grunge, of fuck the police and fuck and run, and here we are now, entertain us.

In "Clueless," the Xer is, of course, represented by Josh (Paul Rudd), a naysaying, overly cerebral college student who is too busy mooching off of his ex-stepfather’s well-stocked kitchen to rage against the machine. Sure, Josh sits around the Horowitz mansion in his sad plaids and Amnesty International T-shirts, complaining about Cher’s narcissism and consumerism and listening to Radiohead. But he’s too comfortable to do anything differently himself. As Cher quips, “So the flannel shirt deal. Is that a nod to the crispy Seattle weather or are you just trying to stay warm in front of the refrigerator?”

Indeed, "Clueless" drew a line in the generational sand in the summer of 1995, marking a key transition in the way fictional youth engaged with their world; the moment youth characters went from representing Gen X—a generation of disenfranchisement and slack—to representing the generation we’ve come to know as the millennials, who are associated with hope and action. Sure, "Clueless" addresses typical teen fare like divorce, drug abuse, premarital sex, cliques and dating, but the bright bubblegum colors of the mise en scene, the peppy soundtrack and Silverstone's infectiously happy performance offered an antidote to the cynicism our generation was told it must embrace to be “authentic.” If anything, the film pokes fun at the idea of the “slacker” and embraces earnestness and positivity.

Generational thinking—that is, explaining the behaviors and consumption habits of large chunks of a population based on when they were born--is not all that useful, as Rebecca Onion explains: “Overly schematised and ridiculously reductive, generation theory is a simplistic way of thinking about the relationship between individuals, society, and history. It encourages us to focus on vague ‘generational personalities’, rather than looking at the confusing diversity of social life.”

However, generational thinking can function quite well when we look not at the way real generations of individuals behave in the real world, but at how fictional generations behave in the fictional world of the movies. In other words, although real-life 1990s teenagers displayed a range of preferences and behaviors and attitudes, their filmic counterparts were far more homogenous; popular culture told Generation X that they were slackers and thugs, spectators and hecklers, misanthropists and depressives. We smoked a lot and watched TV. We were racially segregated. We lacked good career prospects. And whether it was the middle-class bubble depicted in "Reality Bites" (1994) or the inflated sense of urban danger presented in "Boyz N the Hood" (1991), Generation X was obsessed with the concept of authenticity, or not selling out.

In "Reality Bites" Lelaina (Winona Ryder) quickly gives up on her dreams of making documentaries until she gets into a fender bender with Michael (Ben Stiller), a producer at In Your Face, an MTV-style youth-oriented cable channel. Not surprisingly, Michael turns Lelaina’s angst-fueled footage about her lost generation into a cheesy "Real World"-style reality series. Stiller’s character is lame, we are told, because he believes that money can solve his problems. And "Boyz N the Hood’s" Ricky (Morris Chestnut), who wisely parlays his football skills into a college scholarship, is killed in a drive-by shooting before he can secure a stable, middle-class existence for himself and his young family. Before burying his brother, Doughboy (Ice Cube) concludes, “Shit just goes on and on, you know.”

A similar skepticism of capitalism and the American Dream can also be found in the previous decade’s generational, coming-of-age films. In 1980s teen pics like "Better Off Dead" (1985), "Pretty in Pink" (1986) and "Some Kind of Wonderful" (1987), the wealthy were not to be trusted. They were at best fakes and, at worst, sadists. The rich could only be redeemed through contact with the authentically poor or middle class, hardworking teens like Ronald Miller (Patrick Dempsey),who learn the hard way that money "Can’t Buy Me Love" (1987).  But in "Clueless," there is no doubt that money solves all problems. For example, during speech class, Cher explains how the American government should handle Haitian immigrants with an anecdote about a garden party and place settings: “And so if the government could just get to the kitchen, rearrange some things, we could certainly party with the Haitians. And in conclusion may I please remind you it does not say R.S.V.P. on the Statue of Liberty.”

Cher has empathy but lacks perspective, her privilege simultaneously shielding her from the horrors of the world as well as the viewer’s judgment. Her solution to Haitian refugees is the correct one—make do with less to accommodate more—but lacks an understanding of the complex social, political and economic factors required to solve the issue.

Cher’s fabulous wardrobe, impossible for anyone but the wealthiest of Americans to afford, highlights her high social status and Beverly Hills area code. Her snobbery, which would have made her the villain just a few years earlier, is celebrated and embraced. Tai (Brittney Murphy), who is coded as working-class, uncultured and boyish, is made over as Cher and Dionne’s literal charity case. Similarly, Travis (Breckin Myer) only becomes a suitable boyfriend for Tai after donating his bong to charity and finding a way to monetize his skateboarding skills. As Cher helpfully explains, “It is one thing to spark up a doobie and get laced at parties, but it is quite another to be fried all day.” Thus, "Clueless" argues that money—or being within the orbit of the kindly altruistic rich--can truly solve all of our problems.

In addition to its relentless optimism and faith in American capitalism, "Clueless" also illustrated the fantasy of diversity my peers and I had been raised on—a blindcasted vision of teen unity in which white, black, gay, straight, rich and poor can help each other through their exposure to difference. It is telling that, in writing this piece and thinking about the films made for and about Generation X teenagers, the most salient examples that come to mind are almost wholly segregated by race. In the 1990s, fictional white young adults were searching for meaningful employment or pondering the universe in "Singles" (1992) while black young adults were getting shot at or locked up in movies like "Juice" (1992).

But "Clueless" implies that all of the students at Bronson Alcott High are united through the opportunities afforded by their Beverly Hills area code. For example, Cher and Dionne (Stacey Dash) are best friends, their matching star names and outfits signaling their equal class and social status. The fact that Dionne is black and Cher is white is never overtly addressed in the film, just hinted at through moments in which Dionne and her boyfriend, Murray (Donald Faison), engage in lovers’ quarrels over lost hair extensions. Cher’s peer group is multiethnic and multiracial, yet race and ethnicity are never an issue or topic of discussion. Similarly, Christian’s (Justin Walker) sexuality, once revealed, is a non-issue for Cher and her friends. Thus, in true millennial fashion, "Clueless" presents a post-racial, post-sexual world in which the American Dream can, in fact, come true, for those with the right attitude, because each generation inherits its own set of delusions.

It is fitting that Josh—the film's representative Xer—eventually falls in love with Cher, even though her seeming lack of intellectual depth and unhealthy obsession with The Galleria once appalled him. Similarly "Clueless," which Gen X lined up to see in record numbers, taught us to stop worrying and love optimism again. And why not? In Cher’s blazing orbit skateboarding stoners get their lives on track, nerdy teachers find their soul mates, and grades are, to quote Cher, “just a jumping off point to start negotiations.” The future is no longer doomed and hopeless but bright and malleable. In "Clueless," selfish became the new altruism and positivity became the new authenticity. Cher, with her bright yellow knee socks and can-do attitude told Gen X our generation and its malaise was officially out of touch and irrelevant and, in true Xer style, we sat back and watched to see what would happen.

Amanda Ann Klein is Associate Professor of Film Studies in the English Department at East Carolina University. She is the author of "American Film Cycles: Reframing Genres, Screening Social Problems, & Defining Subcultures" (University of Texas Press, 2011). She also blogs regularly at Judgmental Observer, a blog about media and popular culture, and curates the true story blog Tell Us A Story.