From "Manhattan" to "Whatever Works" 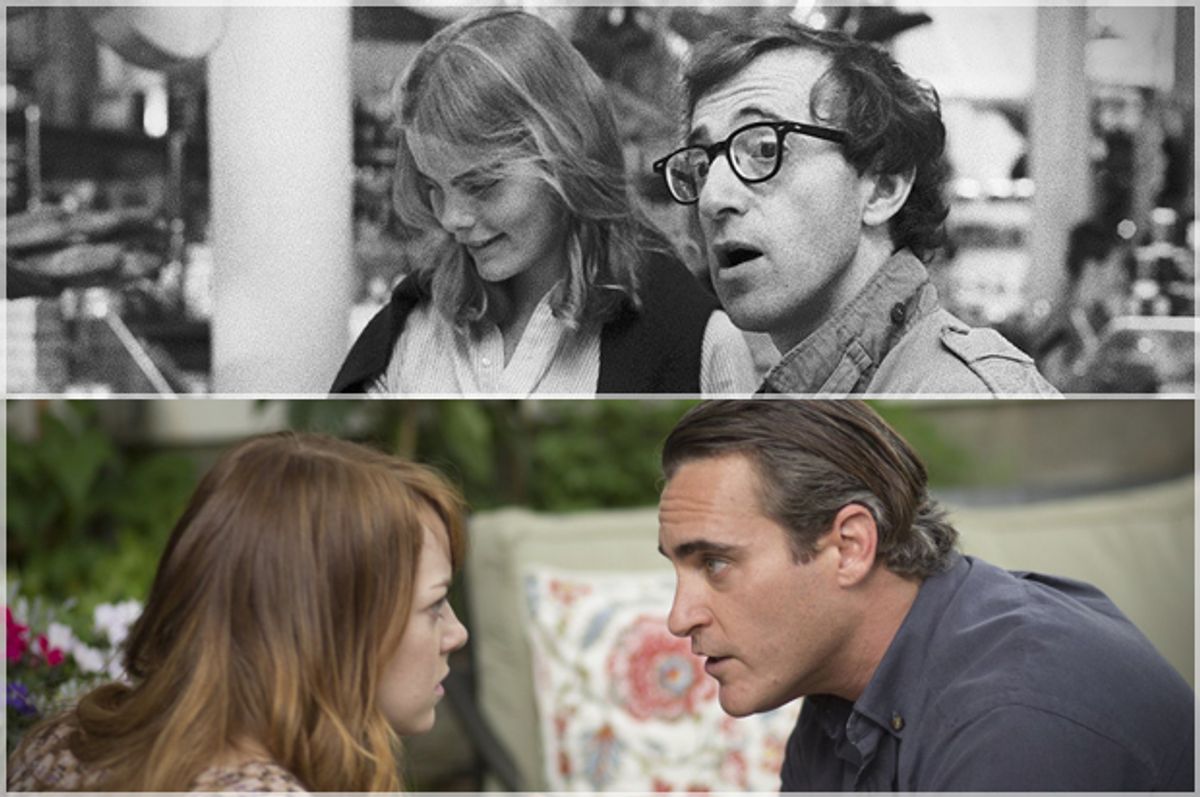 In recent years, Woody Allen has been known for his tendency to cast young actresses as love interests for much older men. While his pairings were mostly age appropriate until the early ‘90s (with the obvious exception of “Manhattan”), the creepiness factor has shot upward in recent years, from Larry David romancing Evan Rachel Wood in 2009’s “Whatever Works” to Emma Stone’s recent pairings with Colin Firth and Joaquin Phoenix (although Allen's latest film, "Irrational Man," which stars 26-year-old Stone opposite 40-year-old Joaquin Phoenix, is actually pretty tame compared to some of his other outings). Here’s a look at the most egregious romantic pairings from throughout Allen’s career.

In his iconic 1979 romance, Woody Allen (43) romances a 17-year-old girl, played by 17-year-old Mariel Hemingway. In a Vanity Fair piece this year, Hemingway would detail how Allen tried to seduce her as a teenager.

A 56-year-old Woody Allen leaves his wife Judy (played by Mia Farrow) and embarks on an unhealthy flirtation with a 20 year-old student of his named Rain (played by 19-year-old Juliette Lewis). The film came out right around the time Allen left Farrow for a relationship with Farrow’s adopted daughter Soon-Yi Previn.

Allen’s take on “Pygmalion” is full of age inappropriate pairings. Woody Allen (59) ’s wife is played by Helena Bonham Carter (29). Allen’s character then becomes obsessed with and sleeps with a prostitute played by Mira Sorvino (28). Helena Bonham Carter, meanwhile, embarks on an affair with her colleague (48 year-old Peter Weller).

The 1997 film has an older cast than some of Allen's films, but the women remain much younger than their male counterparts. In the film, writer Harry Block (62-year-old Woody Allen) is romantically linked to Lucy (42-year-old Judy Davis) and Fay (34-year-old Elisabeth Shue). Fay, meanwhile, has left Harry for Billy Crystal (49). Within the novel Harry is writing, a woman named Leslie (36-year-old Louis-Dreyfus) is sleeping with her sister's husband (59-year-old Richard Benjamin).

In the 1999 rom-com, 39-year-old Sean Penn plays a jazz guitarist named Emmet Ray who falls in love with a mute woman, played by 22-year-old Samantha Morton.

In the 2000 film, Woody Allen's wife, played by Tracy Ullman, is 24 years younger than him.

In "Hollywood Ending," Val Waxman (Allen) has a girlfriend and an ex-wife who are both much younger than him: Lori (33-year-old Debra Messing) and Ellie (36-year-old Tea Leoni).

The romantic-comedy follows the dalliances of misanthropic illusionist (Colin Firth, 53) who falls in love with a young mystic (Emma Stone, 25).

In his most recent outing, Joaquin Phoenix’s philosophy professor enters into a relationship with one of his students, played by 26-year-old Emma Stone.