The Donald, along with much of the right-wing media, have seized on a tragic murder to fan xenophobic flames 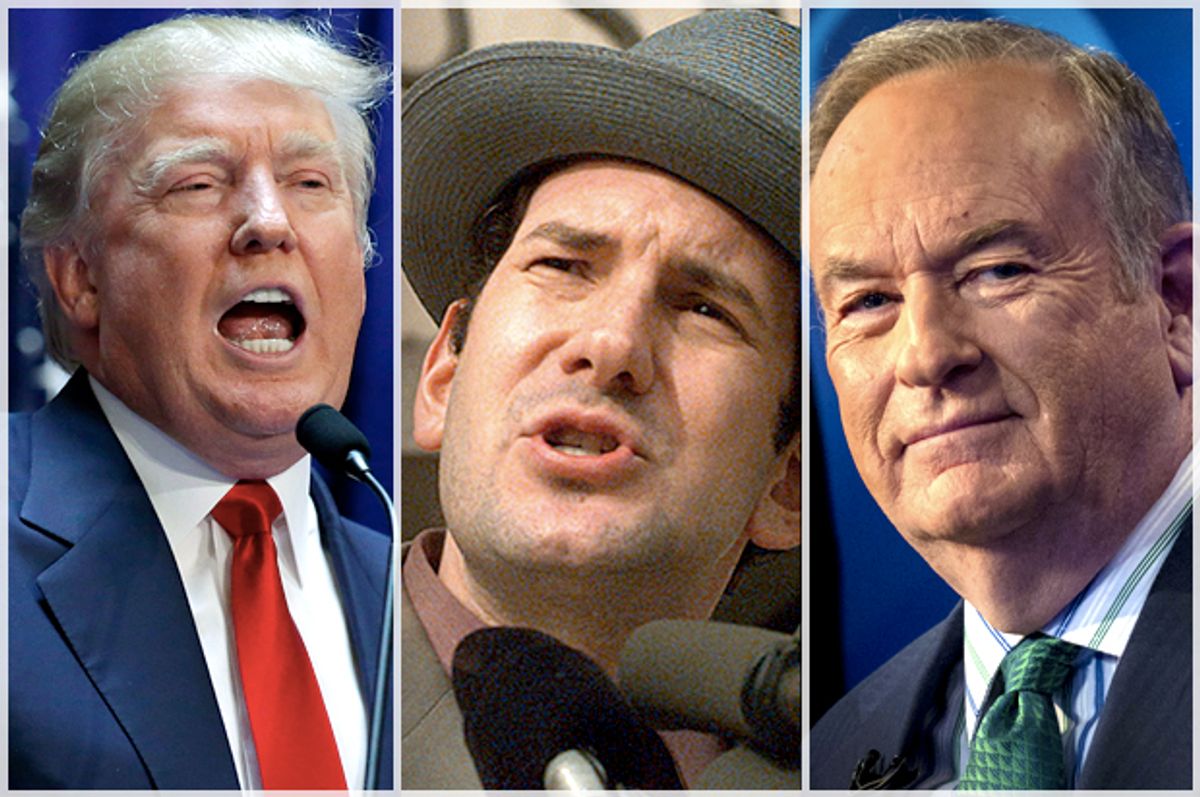 After so many years of what felt like endless conservative success it's sometimes hard to wrap your mind around the fact that progressivism is having quite a good run. This week the Obama administration announced a nuclear non-proliferation agreement with Iran after years of arduous negotiation. Last month the Supreme Court affirmed the concept of reason by rejecting the absurd Obamacare typo case and upholding the basic human right to marry the person you love. After the searing tragedy of a mass murder by a white supremacist, South Carolina was finally shamed into removing the Confederate battle flag from the state house grounds; and the national discussion about police tactics in the wake of the Michael Brown, Eric Garner and Freddie Gray incidents opened up possibilities for criminal justice reform. And now Donald Trump has arrived on the scene just in time to vividly illustrate the GOP base's irrational hostility to immigrants, clarifying the issue for the general public and perhaps making it very difficult for the Republican Party to cobble together a national majority any time soon.

But it always pays to remember that progress is most often made by taking two steps forward and one step back, and it's never a good idea to become too complacent. For every action there is inevitably a reaction. It is unlikely that the right is going to give up on shrieking about Obamacare any time soon. (If nothing else, it's a marvelous organizing and fundraising issue for them.) In addition, the debate over the flag has shifted to confederate monuments, so the Lost cause continues to roil. And while marriage equality is now a matter of settled law, it remains a useful catalyst for the next big right-wing legal strategy: "religious liberty." Meanwhile, the Iran nuclear agreement already has the Republicans in a total state of hysteria, although the smart money has them unable to muster the super-majority it will take to override the president's veto of any bill designed to block the deal.

But the immigration issue is where the usual backlash stands to have the most lasting political impact. Donald Trump's offensive xenophobia, while popular with the base, is clearly very worrisome to the GOP establishment. The numbers do not support a GOP majority as long as they are perceived as intractably hostile to Latinos. And no matter how much they try to protest that their beef is with only with "illegal aliens," it is not perceived that way by the many Americans of Hispanic descent, for obvious reasons.

On his radio show last week, Rush Limbaugh demonstrated in stark terms the disconnect between Republicans and actual reality on the issue of immigration:

Limbaugh: LA Times has a story today, Census Bureau data, as of July 1st last year, 14.99 million Latinos live in California, 14.92 million whites. So the number of Latinos now outnumbers whites in California, but like Chester said, they're not all coming here to join our culture. [Emphasis mine]

The Hispanic community would probably argue, and rightly so, that the culture belongs to them as much as it does to Rush Limbaugh. More actually. The state is named California, after a mythical paradise in a 16th century Spanish novel. The four largest cities in the state have Spanish names. I'm not sure what claim Rush Limbaugh has on the culture, but it's pretty obvious what claim our Californian Latino brothers and sisters have. And while Trump, and others, will toss off asides such as "I'm sure some of them are good people," these good people aren't under any illusions that they and their families are exempt from the bigotry that Trump, and to some extent all the other GOP candidates, are exploiting.

But as much as the political establishment understands that this is a terrible strategy, they simply don't have control of the base -- or even of their own media, which is desperate to keep that base happy and attentive. Outlets like Fox News are always looking for a way to get off the defensive and give their audience something to use to counter-attack.

And the use of the tragic murder of San Francisco resident Kate Steinle by an undocumented immigrant is a perfect example.

Nobody can deny the awfulness of the crime. An innocent young woman was randomly shot and killed while walking along a tourist area with her father; that horrifying beyond words. But on Fox and elsewhere in the right-wing media, Steinle wasn't a victim of the rampant gun violence endemic to this country (which they normally defend as a regrettable price to pay for freedom.) No, according to conservatives, Steinle was the victim of illegal immigration, because the man accused of shooting her had a long history of criminal behavior and previous deportations; and because the city of San Francisco is a so-called "sanctuary city," meaning it does not allow its local police to assist federal immigration enforcement, except in certain limited circumstances. While such policies are anathema to immigration hawks, "Evidence suggests that these laws don't just make cities safer for illegal immigrants; they make them safer for everyone," as Mother Jones explains.

In a nutshell, Fox News and others are crassly using Steinle's killing as vindication of Donald Trump, and by extension all those members of the base who applaud his nativist agenda.

Fox is especially cynical, using Steinle's murder to create a parallel narrative to the discussion we've all been having about systemic racism. In their story (like Trump's) the victims are the white people being gunned down by "illegal immigrants" in the streets. In the process they are bludgeoning liberals over what they see as an over-emphasis on race -- which is a shallow show of opportunism which disrespects both Steinle and all other victims of gun violence.

Kate’s murder has since exploded into a national debate on illegal immigrant, sanctuary cities [and] crime. With the White House ducking the issue of its own acquiescence in these city’s decision to flout the federal immigration laws which were duly enacted. When asked repeatedly this week to speak to this case, White House Spokesman Josh Earnest declined to weigh in other than to refer folks to the Department of Homeland Security. A stark contrast to what we saw after Michael Brown was killed in Ferguson, Missouri. A man we now know was attacking a police officer at the time of his death. His funeral saw three Obama officials in attendance, his death drew comments from President Obama personally. And the administration also sent in the DOJ and 40 FBI agents dispatched to Missouri after Michael Brown was killed.

Where is the swarm of agents in San Francisco? Then there was Freddie Gray in Baltimore, a repeat drug offender who was killed in police custody. Here again his funeral was attended by three Obama administration officials and again the President spoke personally to Freddie Gray’s death. And again, sent the DOJ in to investigate. When Trayvon Martin was killed in Florida, the President spoke to his death which was later ruled to be in self-defense. But Kate Steinle, nothing. No comments, no swarm of FBI agents, no DOJ investigation, nothing. Why?

This might make some sense if Donald Trump weren't completely full of it. If there was an epidemic of criminal behavior from undocumented immigrants, perhaps you could make a case that it was commensurate with centuries of systemic racism and injustice, and demand that the president step up to comment. But it isn't. Steinle's murder was tragic. But while this sort of crime is painfully common in this country, undocumented immigrants commit very few of them. This post from Think Progress provides the relevant statistics:

Most of the undocumented immigrant population in the United States are not a violent threat, with one study finding that “among men age 18-39 (who comprise the vast majority of the prison population), the 3.5 percent incarceration rate of the native-born in 2000 was 5 times higher than the 0.7 percent incarceration rate of the foreign-born.” Jessica Vaughan, director of policy studies at the immigration-restrictionist organization Center for Immigration Studies previously said, “we found no strong evidence one way or the other for the notion that immigrants commit either more or less crime than the American population.” What’s more, a 2013 Criminology and Delinquency study found that first-generation immigrants commit crime at a lower rate than second-generation immigrants and native-born, non-Hispanic whites.

(This Washington Post fact-check also addresses the bogus notion that the country is teeming with murderous illegal immigrants.)

This is ultimately a cheap misdirection and it's unusually sleazy even for the right-wing media machine. Any threat of violence coming from undocumented immigrants in this country is dwarfed by the threat of violence coming from our fellow Americans. Kate Seinle wasn't targeted for being white in the way that young unarmed Black men are targeted by some police, or those Charleston parishoners were targeted by a white supremacist for being Black. The president addressed those incidents because they spoke of a deep and abiding injustice. Undocumented immigrant murderers, heinous criminals that they are, do not represent the same thing at all.

What this indicates is that the right is no longer able to rely on the simple (and highly debatable) case that illegal immigration drives down wages and that immigrants take jobs from American workers. They apparently can't even depend on their old standbys about immigrants ruining our exceptional culture to keep the faithful in the fold. They are now reduced to making lurid, hyperbolic claims about hordes of murderers and rapists flooding the border.

But no matter what they say or do, Latinos have always been here and they always will be. Fox News adopting the Donald Trump narrative certainly won't change that. Using the tragic murder of Kate Seinle to create a bizarro-world version of a social justice movement won't change that either. But if they really work at it, they can create enough of a backlash to ensure that immigration reform won't see the light of day any time soon. Unfortunately, for them, that only makes their fundamental political problem even worse. For every conservative they placate with this sort of thing, two more Latino Americans decide they want nothing to do with them. Progress is often two steps forward and one step back. Backlash is always one step forward two steps back.