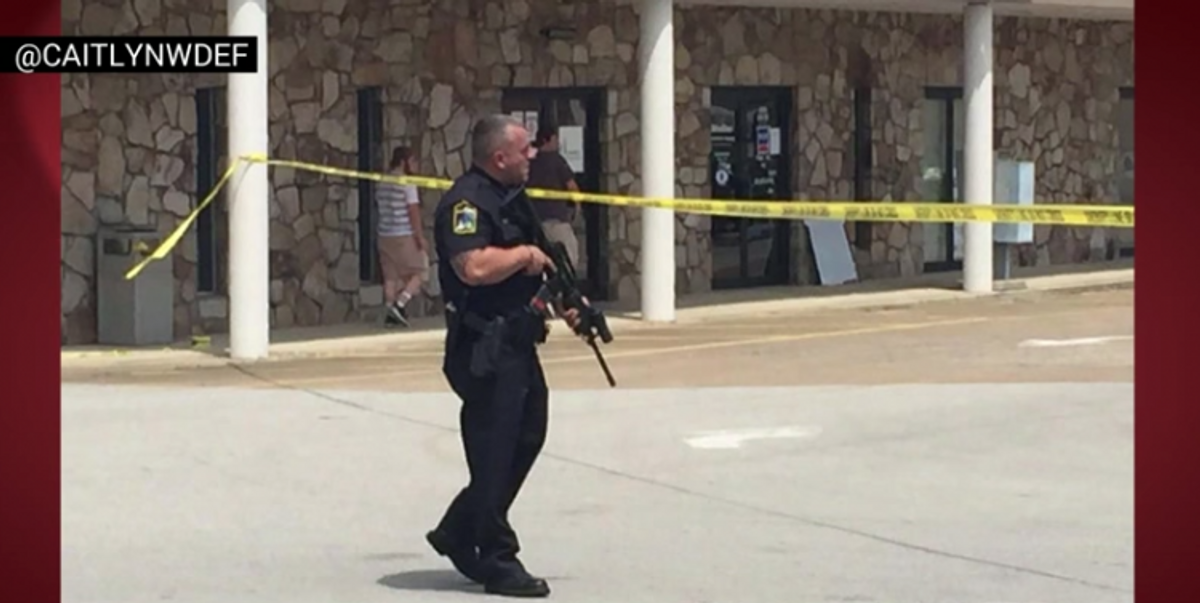 A gunman unleashed a barrage of gunfire at two military facilities Thursday in Tennessee, killing at least four Marines and wounding a soldier and a police officer, officials said. The shooter also was killed.

"Today was a nightmare for the city of Chattanooga," Mayor Andy Berke said. "As a city, we will respond to this with every available resource that we have."

U.S. Attorney Bill Killian said officials were treating the attacks as an "act of domestic terrorism," though FBI Special Agent in Charge Ed Reinhold said authorities were still investigating a motive. The first shooting happened around 10:45 a.m.; the attacks were over within a half-hour.

A U.S. official says the gunman in the shootings in Tennessee has been identified as 24-year-old Muhammad Youssef Abdulazeez.

He was believed to have been born in Kuwait, and it was unclear whether he was a U.S. or Kuwaiti citizen. The official was speaking on condition of anonymity to discuss the ongoing, sensitive investigation. It was not immediately clear whether the gunman's first name was spelled Muhammad or Mohammad.

He is from Hixson, Tennessee, which is just a few miles across the river from Chattanooga.

Authorities and officials say the gunman killed four Marines and wounded a police officer and others in two attacks on military facilities. The gunman was also dead.

Berke said five people died in all, including the gunman. A police officer was shot in the ankle, and others were wounded, he said.

Two U.S. officials, speaking on condition of anonymity to discuss an ongoing investigation, told The Associated Press four U.S. Marines were among the dead.

A Marine recruiter was treated at a hospital for a gunshot wound to the leg, the Marine Corps said on its Facebook page.

"Lives have been lost from some faithful people who have been serving our country, and I think I join all Tennesseans in being both sickened and saddened by this," Gov. Bill Haslam said.

The shootings began at a recruiting center on Old Lee Highway in Chattanooga where five branches of the military all have adjoining offices. A gunshot rang out around 10:30 or 10:45 a.m., said Sgt. 1st Class Robert Dodge, 36, the center leader for U.S. Army recruiting at the center.

"Shortly after that, just a few seconds, the shooter began shooting more rounds. We realized it was an actual shooting," he said.

He and his colleagues then got on the ground and barricaded themselves in a safe place. Dodge estimated there were 30 to 50 shots fired.

He did not see the shooter or a vehicle. The Army recruiting office was not damaged, but doors and glass were damaged at the neighboring Air Force, Navy and Marine offices, he said.

Law enforcement officials told recruiters that the shooter was in a car, stopped in front of the facility, shot at the building and drove off, said Brian Lepley, a spokesman with the U.S. Army Recruiting Command in Fort Knox, Kentucky.

The recruiting center sits in a short strip between a Cricket Wireless and an Italian restaurant with no apparent additional security. Nearby, Nicholas Donohue heard a blast of gunshots while working at Desktop Solutions. But he had music playing and wasn't quite sure what the noise had been. He turned off the music and seconds later, a second blast thundered. He took shelter in a back room.

"Even though it knew it was most likely gunfire I heard, you also don't want to believe it's happening in the moment," he said. "Since I didn't see anything, I couldn't be sure."

By the time he emerged, police were cordoning off the area.

Within minutes of that attack, the shooter then opened fire at the Navy Operational Support Center and Marine Corps Reserve Center Chattanooga, about 7 miles away. Reinhold said all of the dead were killed there.

The center sits between the highway and a pathway that runs through Tennessee RiverPark, a popular park at a bend in the Tennessee River northeast of downtown Chattanooga. It's in a light industrial area that includes a Coca-Cola bottling plant.

The two entrances to the fenced facility have unmanned gates and concrete barriers that require approaching cars to slow down to drive around them.

Marilyn Hutcheson, who works at Binswanger Glass across the street, said she heard a barrage of gunfire around 11 a.m.

"I couldn't even begin to tell you how many," she said. "It was rapid fire, like pow pow pow pow pow, so quickly. The next thing I knew, there were police cars coming from every direction."

She ran inside, where she remained locked down with other employees and a customer. The gunfire continued with occasional bursts she estimated for 20 minutes.

"We're apprehensive," Hutcheson said. "Not knowing what transpired, if it was a grievance or terroristic related, we just don't know."