The GOP's apocalyptic tradition: How anti-communist hysteria paved the way for a calamitous "War on Terror"

If Republican saber-rattling on Iran seems familiar, it's because it should 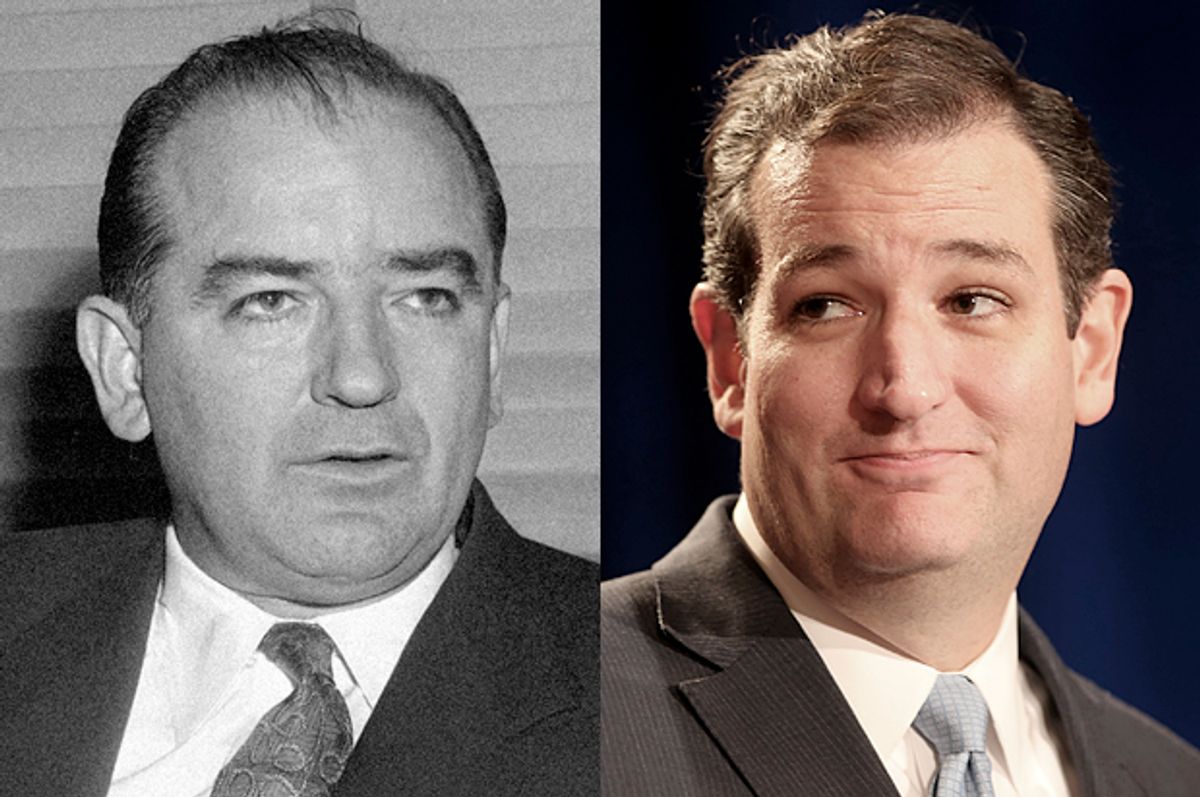 News of the Iran nuclear deal this week has predictably infuriated the same demagogues who previously committed what many considered treason, sending an “open letter” to the leadership of Iran behind the Obama administrations back. The author of that letter, Tom Cotton, has said, “The American people are going to repudiate the deal and I think Congress will kill the deal,” while Ted Cruz (a.k.a. Joe McCarthy Jr.) declared, “This deal has become a research and development program for the Iranian nuclear program.”

Modern day birchers, who view Islam the same way their predecessors viewed communism, would much prefer military action than diplomacy. If they had their way, maybe another organized coup would be on the table for Iran. Or, as Jeb’s older brother George did at the start of the century, a military invasion for WMDs. This aggressive warmongering attitude is nothing new here in America, and some of it can be attributed to the fact that the great majority of Americans have never experienced the savagery of war.

In fact, the last time Americans experienced true war on the mainland, aside from the centuries long Indian Wars, they were riding horses, firing muskets, and fighting over the barbaric institution of slavery, with the great majority dying from untreatable ailments. (For every three soldiers who died in Civil War combat, five more died of disease.) For a country that is so well known for war, this is quite an accomplishment.

Or not. America has, by far, the most powerful military in the known universe, and spends on defense about as much as the next 10 or so countries combined, depending on what year we’re in. This, along with the fact that no American has experienced being invaded by a hostile military force, creates an arrogance and carefree attitude when it comes to the topic of war. Not only has no living American (residing within the country) ever dealt with foreign armies invading our land, bombing our homes, and murdering our friends and family, but the great majority of Americans have never, and will never, experience invading another country and fighting a war overseas. This would be a great thing, if we were not the belligerent war-mongering nation that we are.

Back in 2002, when the Bush administration was calling for the invasion of Iraq, and countries were like France were rightfully withholding its support, this American arrogance shined through, especially with idiotic euphemisms like “freedom fries,” created by former Congressman Bob Ney, who was later involved with the Abramoff scandal and spent 30 months in jail. It’s easy to forget here in America how completely destroyed European nations were during World War II, and what that kind of destruction does to a society. Keith Lowe described the European devastation in the introduction of his book, "Savage Continent."

“Imagine a world without institutions. No governments. No school or universities. No access to any information. No banks. Money no longer has any worth. There are no shops, because no one has anything to sell. Law and order are virtually non-existent because there is no police force and no judiciary. Men with weapons roam the streets taking what they want. Women of all classes and ages prostitute themselves for food and protection.”

Still, the amount of pain and suffering that leaders of the United States have caused since the end of the wars with fascism remains quite a mystery to most citizens here within our borders. Even though we have caused so much anguish around the world, we just can’t seem to grasp this anguish, and think of war as some kind of virtual reality, something that is only seen through the television or the computer screen, pixelated and distant, completely foreign.

War is a necessary evil in order to maintain the freedom and security we enjoy, our leaders tell us. Without “war,” which, again, is nothing more than some far off excursion to most Americans, it is only a matter of time before that war is visited upon us, becomes a first-hand experience within our borders. This is the mythology of war -- the fear that one day it will become a reality, and not just something that you read about once or twice a week if, we do not aggressively keep control of the international situation through offensive measures.

The true importance of war in America, of course, is purely economic. And when is it not economic? Capitalism and imperialism are inseparable; and these naturally lead to a militaristic empire. An empire that stages coups on democratically elected governments and supports brutal dictators (as long as they allow us to exploit the country of its natural resources) and spends trillions of dollars on defense, which in return makes colossal profits for defense and energy industries. The war machine is simply too good to give up. It brings vast wealth to American corporations, employes myriad individuals, creates an illusion of safety, and the great majority of citizens don’t ever have to experience the vast hardship that comes along with it.

Not only has our belligerence been devastating to our reputation, but it has made the world a much more dangerous place, and the individuals blasting the Iran deal would likely make it even more dangerous. Islamic terrorism, for example, did not just suddenly appear out of readings from the Quran. It has just as much to do with politics as it has to do with religion, and the politics are clearly reactionary. The 20th century saw the end of blatant colonialism, and the rapid formation of capitalist imperialism. Islamic countries, ripe in black gold, were hit hard by the imperialist misadventures and the ideological confrontations between the east and west. The democratic government of Iran was overthrown with the CIA’s assistance, through bribery and corruption, leading to a quarter century of dictatorship. In Afghanistan, which was relatively stable in the '60s and '70s, the state became anarchic and fundamentalist, with the help of Ronald Reagan, who armed and supported Jihadi fighters (who would later become the Taliban) against the Soviet Union. Other states in the Islamic region, such as Egypt, were also run with brutal repression and supported by the United States government.

Most Americans choose to ignore these realities, or simply have never been informed of them. Most Americans do not grasp the savagery of war. When you or your parents or grandparents have never experienced bombs being dropped on your homeland or foreign troops walking through your streets, it is easier to support war and assume that your leaders are being honest and that your country is fighting “the good fight.”

The American empire has bipartisan support in the government, though Republicans are more open about their hawkishness. During the Cold War, the fight against godless communism was used to excuse capitalistic imperialism, while today it is largely the fight against terror. There will always be an ideological enemy used to condone imperialism, even when the true cause has always been, and will always be, profit and power. 9/11 was a tragic gift to the imperialists; one that garnered widespread support to overrule civil liberties and invade a country that had nothing to do with the attack.

Now, the Iran nuclear deal could be a step towards a less belligerent and therefore less hated America. The past 70 years show that overthrowing democratically elected governments and invading third world countries does nothing but create condemnation and security threats. Dwight Eisenhower once said angrily to the Director of the CIA, Allen Dulles, that he was leaving a “legacy of ashes” to his successor. This legacy has continued way beyond Eisenhower, and neo-McCarthyists on the right would like to continue this legacy. After seven decades of disastrous wars, it’s about time that the U.S. government realize that war should only be the very last option, and that diplomacy, despite what Tom Cotton believes, is a path towards a safer and more respected America.