Painful past, bright future: What Caitlyn Jenner and 14-year-old TLC star Jazz Jennings do — and don't — have in common

Jenner's ESPY speech revealed years of isolation, but in "I Am Jazz" a trans teen is surrounded by loving awareness 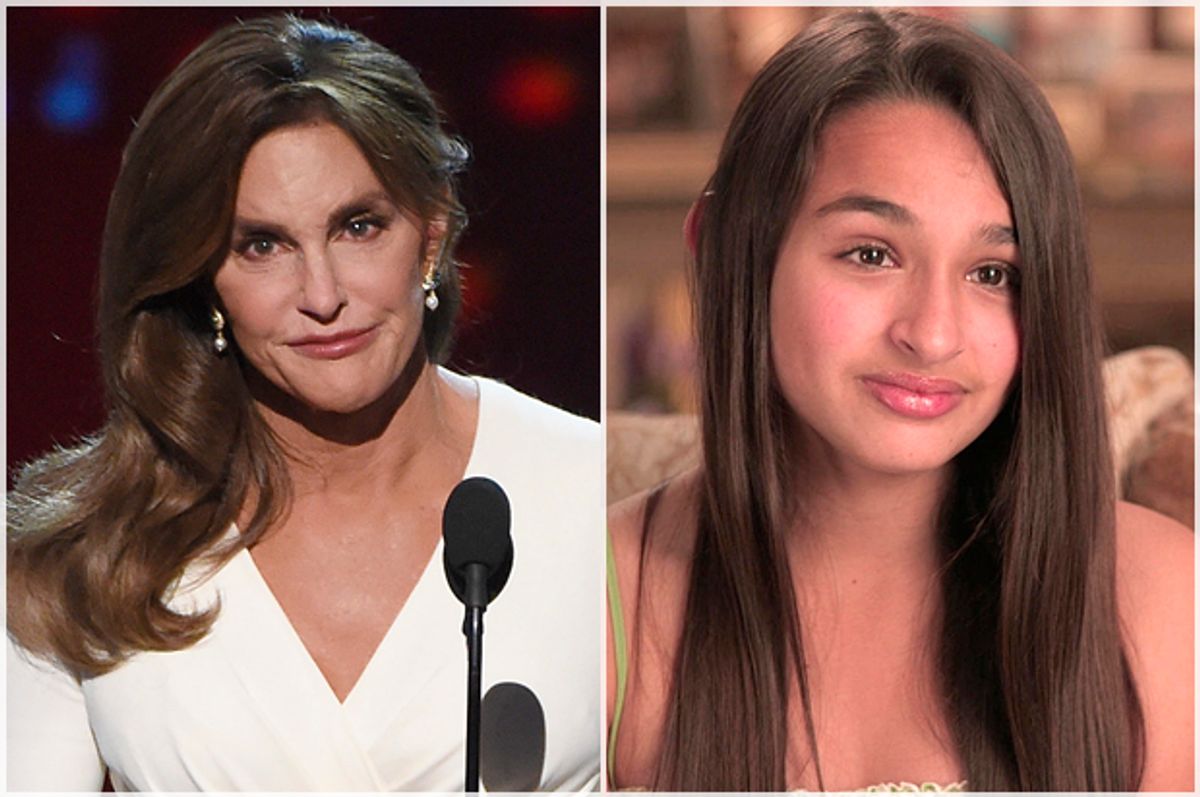 Last night featured two major television moments starring transgender people: Caitlin Jenner’s moving ESPYs acceptance speech on being given the Arthur Ashe Courage Award, and the premiere of 11-episode docuseries "I Am Jazz" on TLC, which follows 14-year-old transgender activist and YouTube star Jazz Jennings and her family. The contrasts between their narratives are a lesson in how far our culture has come—and how far we have to go.

When Jenner told the ESPYs crowd that “Before just a few…months ago, I had never met anybody else who was trans, who was like me. I had never met a trans person, never,” I was struck by how isolating that must have been for her. She previously told Vanity Fair, “Bruce always had to tell a lie, he was always living that lie, every day, he always had a secret from morning till night. Caitlyn doesn’t have any secrets.”

So it’s especially refreshing to see that Jazz’s experience, while not entirely free of hardship, hasn’t involved keeping her gender a secret. Jazz’s family have all known she’s a transgender girl since the time she did at around age two, when she revealed it to her mom, and have been firmly supportive. “At the end of the day, it’s all about unconditional love,” her father says.

"I Am Jazz" adds a powerful element by revealing the various ways family members have handled this news: Jazz’s grandmother admits to going to a professional to help her get over her disappointment, her grandfather reveals he starts getting educated because he didn’t know anything about trans issues, and her sister admits that while at first she was disappointed to no longer be the lone “princess” of the family, she soon adjusted.

Jenner, who Jennings calls a role model, too has the support of her large family, most of whom made appearances at the ESPYs, including her 88-year-old mother along with her famous children and stepchildren, but whether and how welcoming of Caitlin they would be had been on her mind pre-transition. As Jenner revealed in her speech, “The biggest fear in Caitlin Jenner coming out was I never wanted to hurt anyone else, most of all my family and my kids. I always wanted my family to be so proud of their dad because of what he has accomplished in his life.”

Counter this with Jazz, who credited her family with her confidence in an interview with Glamour, saying “Because my family always embraced me right from the start and showered me with unconditional love and support and acceptance, that’s why that confidence was able to blossom and I was able to be who I am proudly. So it’s thanks to them. If I was shut down at that time and didn’t have such a supportive family, I couldn’t be who I am, and therefore I probably wouldn’t be as confident.”

That belief in herself shines through in every scene; "I Am Jazz" showcases the teen’s comfort in front of the camera (at age 6, she gave an interview to Barbara Walters about being trans) and willingness to discuss almost anything, from dating to whether she plans to get genital reassignment surgery. After we see her talking about which girls are popular at school with guys (aka, who’s got the biggest breasts), Jazz reveals, “I face most of my discrimination from the boys because they think that they’re gay for liking another ‘boy’ and they just overall think that I’m disgusting and weird. I’d like to be respected for who I am.”

That doesn’t mean that her family has been or will able to protect her from every challenge, but that she’s been able to have their love as a constant, knowing they will back her up. On the show, we see a stranger call Jazz a “tranny freak” as he walks by a restaurant where Jazz and her mother are dining. While her mother wants to run after them, Jazz tells her to forget about them. It’s a moment that again highlights a maturity that can almost make you forget her age.

We also see Jazz and her mother during a doctor’s visit, where they discuss hormone blockers, which have been used to prevent her body from going through male puberty, and the options for next steps. Whether it’s an innate aspect of her personality or the fact that Jennings is used to being in front of a camera by now, it’s still impressive that, in the name of educating others and normalizing her experience, she’s willing to open up that aspect of her life, and to TLC’s that it didn’t read as exploitative. After all, how many teens would want to hear a doctor saying things like, “Have you noticed any more changes, particularly in regard to breast development?” in private, let alone for the consumption of strangers?

But what struck me most was that, while Jazz is obviously the focal point of the show, this is not a case where the rest of her family fades into the spotlight. Jazz isn’t coddled, spoiled or treated like a star; she’s treated like a kid, as she should be. Her mom is not a stage mom, and, based on this first episode, while Jazz’s parents have unique concerns around parenting her, there’s never a hint that she’s given special treatment over her siblings. Her older sister, home from college on a break, takes her shopping for a bathing suit, and her brothers give her advice about boys.

While their backgrounds are quite different, both Jenner and Jennings seem to have a dual mission for their TV shows: to welcome viewers into their lives (Jenner’s docuseries "I Am Cait" premieres July 26 on E!) and to use their fame to highlight others who don’t have the same level of privilege they do. In her ESPYs speech, Jenner highlighted the issue of violence against transgender teens, going on to urge the audience into action by stating, “I know I’m clear with my responsibility going forward, to tell my story the right way, for me, to keep learning, to reshape the landscape of how trans issues are viewed, how trans people are treated. And then more broadly to promote a simple idea: accepting people for who they are. Accepting people’s differences. My plea to to you tonight is to join me in making this one of your issues as well.”

During every commercial on "I Am Jazz," viewers were encouraged to post photos of them on social media using the hashtag #JazzHands, and for each one, TLC will donate $1 (up to $5,000) to TransKids Purple Rainbow Foundation, a non-profit co-founded by Jazz which provides scholarships to trans-friendly camps, gives financial support to homeless transgender youth and supports other services for transgender children.

The effect of these social media postings goes beyond the financial. Simply scrolling through Twitter and seeing the support for Jennings, much of it by young adults, is a sign that the isolation Jenner has spoken of feeling is, for some, starting to dissipate. Even if trans kids don’t personally know others like them, they can see Jennings live out the highs and lows of a notably challenging age with complete clarity about who she is.

From Jenner’s ESPYs speech and in Vanity Fair, it’s clear that she is casting off the weight of having lived in hiding for so long. Whereas she teared up during her emotional ESPYs speech, the lighter tone of "I Am Jazz" perhaps reflects the environment in which the outspoken teenager has been raised, one where she’s never had to doubt her family’s support. Jennings speaks like the teen vlogger she is, someone seemingly as comfortable in the public eye as out of it, who has no issues with being transgender, but is willing to publicly grapple with those who do. Since Jennings began transitioning at age five, many of the issues she’s facing are ones our culture hasn’t heard much about; at one point on the show, Jazz’s mom refers to her as a “guinea pig” in terms of her medical treatment. I Am Jazz doesn’t paint a utopia, but it does offer a family-friendly look at how many lives are affected by a child’s gender transition, and the obstacles a child like Jennings has to face.