The most remarkable thing about Caitlyn Jenner's breathtaking ESPYs speech: A few years ago, it would have been unthinkable

America is nowhere near perfect, but the powerful symbolism of Jenner's speech last night is impossible to deny 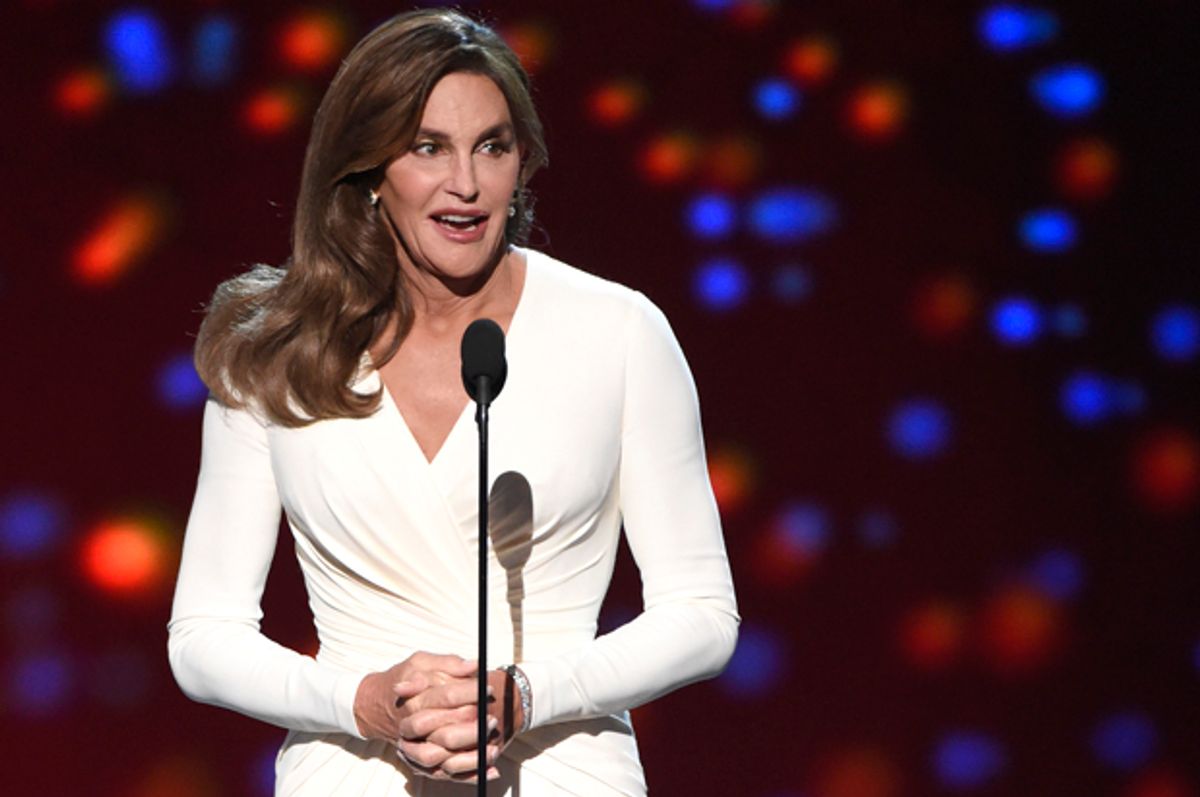 These can feel like surreal times. The world is shifting around us so swiftly, so inexorably, that there are moments where you rub your eyes and wonder if you really saw what you just saw.

I had a moment like that while watching the tribute that ESPN had prepared for Caitlyn Jenner, who received the channel's Arthur Ashe Award for Courage at the ESPYs on Wednesday night. The video spent many minutes documenting Jenner's life and her emergence as the most famous trans person in the world, but towards the end, it showed footage of a trans rights march. A sign reading "TRANS POWER" popped up on the screen. So did one that said "Black and Brown Trans Lives Matter." All the while, the kind of cheesy inspirational music you always get at awards shows played underneath.

If I'd had a DVR, I would have rewound it. I had taken to thinking that, after the dizzyingly fast triumphs of the LGBT rights movement in recent years, there was little that could surprise me. But this moment—a massive sports network openly cheerleading what until just a few years ago would have been seen as a march of strange radicals, and probably mocked by some ESPN hosts—made me think, I can't believe I just saw that.

Then, Abby Wambach, a woman last seen sharing a passionate kiss with her wife after winning the World Cup, brought Caitlyn Jenner to the stage, and the ESPYs crowd all stood and applauded.

In his fevered dissent from the Supreme Court's gay marriage decision, Samuel Alito worried that homophobes—sorry, people with "traditional ideas" about these things—would face marginalization in future. Alito is right to be worried. If he was watching the ESPYs, he would probably have thought that his worst fears were being confirmed. A room full of people had to stand and cheer a trans woman whether some of them wanted to or not. The horror.

That was my favorite part of the whole thing: The idea that somewhere in that crowd was a person grudgingly standing despite themselves. I love that that person is on the losing side of history. Sometimes it can seem like the planet—hurtling towards ecological catastrophe, riven by greed and bloodshed—is beyond changing for the better. It's nice to win something. It's nice when a movement is successful.

So far, Jenner has played her part in all of this extremely well. Her speech on Wednesday was generous and moving and outward-looking, making sure to honor the trans pioneers who came before her and to highlight the many perils and prejudices less well-known trans people face. She has yet to really put a foot wrong.

One ally Jenner has is the mainstream media, which has played an unusually forceful role in pushing for LGBT equality in the past few years. Journalists who are tight-lipped about their views on a range of hot-button issues have not been shy about openly backing the forward march of the LGBT rights movement. During her speech, Jenner made sure to thank Diane Sawyer, who was in the crowd. Sawyer looked back dewy-eyed, clearly proud of her part in bringing Jenner's story to the world.

Sawyer's interview with Jenner on ABC earlier this year was a two-hour celebration, interspersed with information about the violence and discrimination that trans people have to cope with far more than other queer people. It was not a "balanced" look at trans rights. There were no opposing viewpoints involved. Contrast that with another piece Sawyer did on ABC, this one from 1998. She investigated the cancellation of "Ellen," which ABC yanked from the air just one season after Ellen DeGeneres's famous coming-out episode. In the segment, Sawyer dutifully interrogates both sides of the controversy, asking DeGeneres if her show had been "too gay" and then asking ABC chief Bob Iger what the problem with a gay show was. (Iger, who now runs the entire Disney corporation, does not come off well.)

Such a world has all but vanished from our screens. We have moved from a time when Ellen—who is now one of the most whitebread, unthreatening people in entertainment—was seen by ABC as dangerous and wildly political, to a time when that same network demands that its audience respect Caitlyn Jenner. It is something to make you do a double take.

The conversations that the LGBT community is now having—about what it means to be queer in a world of marriage, about the bourgeois, exclusionary and corporate whiteness of the queer elite, about how to maintain a radical spirit in the wake of a triumphant but inherently conservative string of victories, about the many hurdles that still exist—are very important ones. As a gay man with no particular love for the institution of marriage and with no desire to be a part of the military-industrial complex, I am keenly aware of the wrinkles that complicate the current wave of euphoria. But the truth remains that to be concerned about what the broad societal acceptance of your essential humanity will mean for you is to be in a good place. A world where a fearless, rowdy, beautifully revolutionary civil rights movement can do what the LGBT rights movement has done in the past 50 years is a world to feel at least a little hopeful about. And a world where Caitlyn Jenner is dubbed a hero instead of a pariah is a world that has changed for the better.