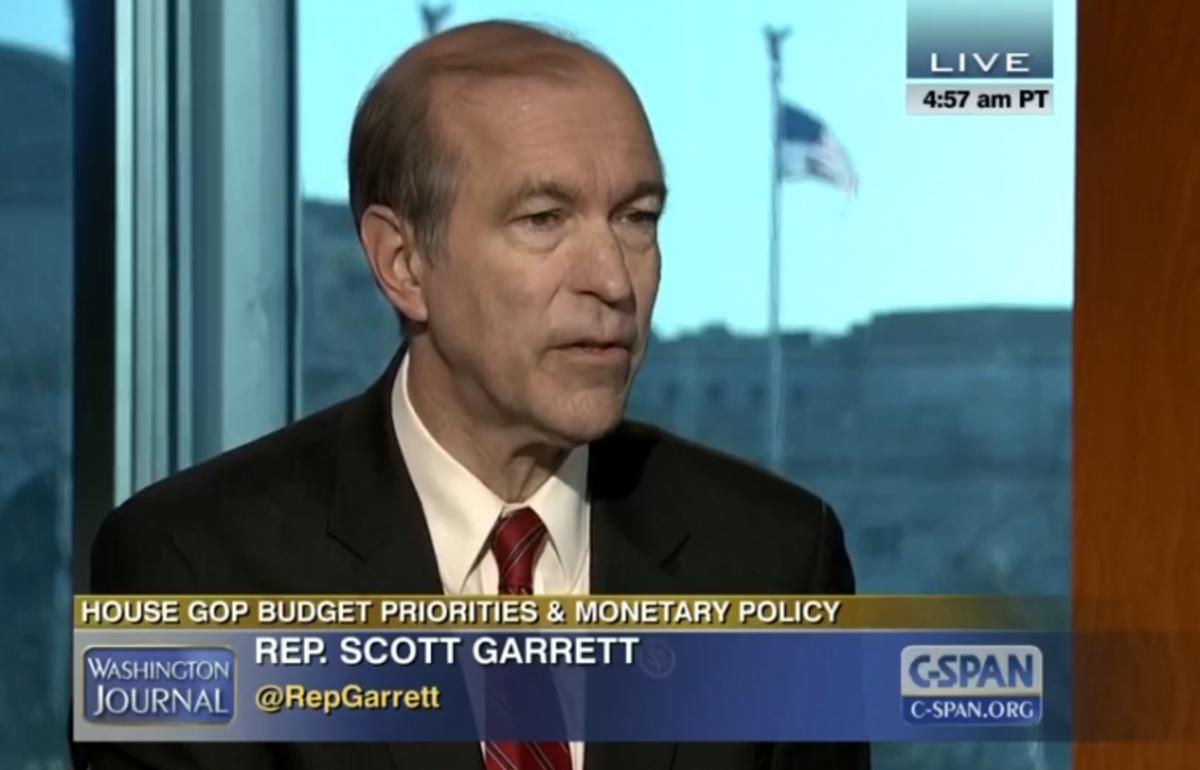 One GOP lawmaker is bucking his party and withholding financial support for the group tasked with electing Republicans to Congress "because it actively recruited gay candidates and supported homosexuals in primaries," reports Politico.

New Jersey Rep. Scott Garrett reportedly told colleagues at a closed door House committee leadership meeting on Friday that he would not contribute to the political arm of the Republican caucus because it recruits and supports gay candidates. House Republicans are expected to contribute dues to the National Republican Congressional Committee to help fund GOP campaigns. Garrett, founder of the House Freedom Caucus, has a longstanding penchant for bucking the Republican House leadership and was called out for failing to pay his dues and failing to vote in line with Speaker John Boehner during the meeting:

According to multiple sources present, when Committee Chairman Jeb Hensarling (R-Texas) told members that subcommittee chairmen are expected to pay their dues to the GOP’s campaign arm and to side with leaders on procedural votes that are critical to their ability to control the party’s legislative agenda. Hensarling was complying with recent demands for such loyalty from Speaker John Boehner (R-Ohio) and House Majority Leader Kevin McCarthy (R-Calif.). But his message seemed squarely aimed at one lawmaker: New Jersey Rep. Scott Garrett. A Hensarling ally who chairs a prized Financial Services subcommittee, Garrett has angered GOP leaders and many members of the committee. He voted against Boehner’s bid for another term as speaker, bucked leadership on a critical procedural vote and has refused to pay National Republican Congressional Committee dues.

When Garrett finally explained his opposition to the NRCC, he cited their recruitment and support of gay Republican candidates:

Garrett first responded that his procedural vote against leadership was a matter of conscience. Then he stunned the room with this explanation: He had not supported the NRCC in the past, he said, because it actively recruited gay candidates and supported homosexuals in primaries.

According to Politico, Garrett hasn't paid his dues for the last two election cycles, voted against Boehner's re-election as Speaker and bucked the party on TPP. Boehner has been exacting revenge on such members of his caucus recently, attempting to strip some dissenters of their committee leadership positions. “When we are entrusted by our team with a position of responsibility, we have an obligation to live up to those responsibilities,” Boehner reportedly told Republicans last month. “We are in the majority. Part of being in the majority is advancing an agenda — a conservative agenda. You may not agree with every part of the agenda, and when you don’t, you can vote your conscience. But voting against rules is not a vote of conscience; it is a vote to hand the House floor over to Nancy Pelosi."

Politico reported that after vocal discontent and rumblings from his fellow Republican Congressmen, Rep. Garrett agreed to "donate to the NRCC’s building fund and recount efforts, but not to the committee directly." One fellow Republican reportedly even called out Garrett's hypocrisy on donations to gay candidates:

Some lawmakers grew noticeably angry, pointing out that the NRCC does not get involved in primaries, nor does it care about the sexual orientation of candidates. Rep. Patrick McHenry (R-N.C.), a member of leadership who led the NRCC’s candidate recruitment during the 2014 election cycle, said that Richard Tisei, a gay Republican whom the NRCC supported, was “equally homosexual” when Garrett donated directly to him in 2012, according to a source present.