Wipe the Confederacy out now: Southern haters have a sick new lie designed to hold onto Confederate flags, memorials

It's actually the opposite of whitewashing history to finally be honest about slavery, the South and the Civil War 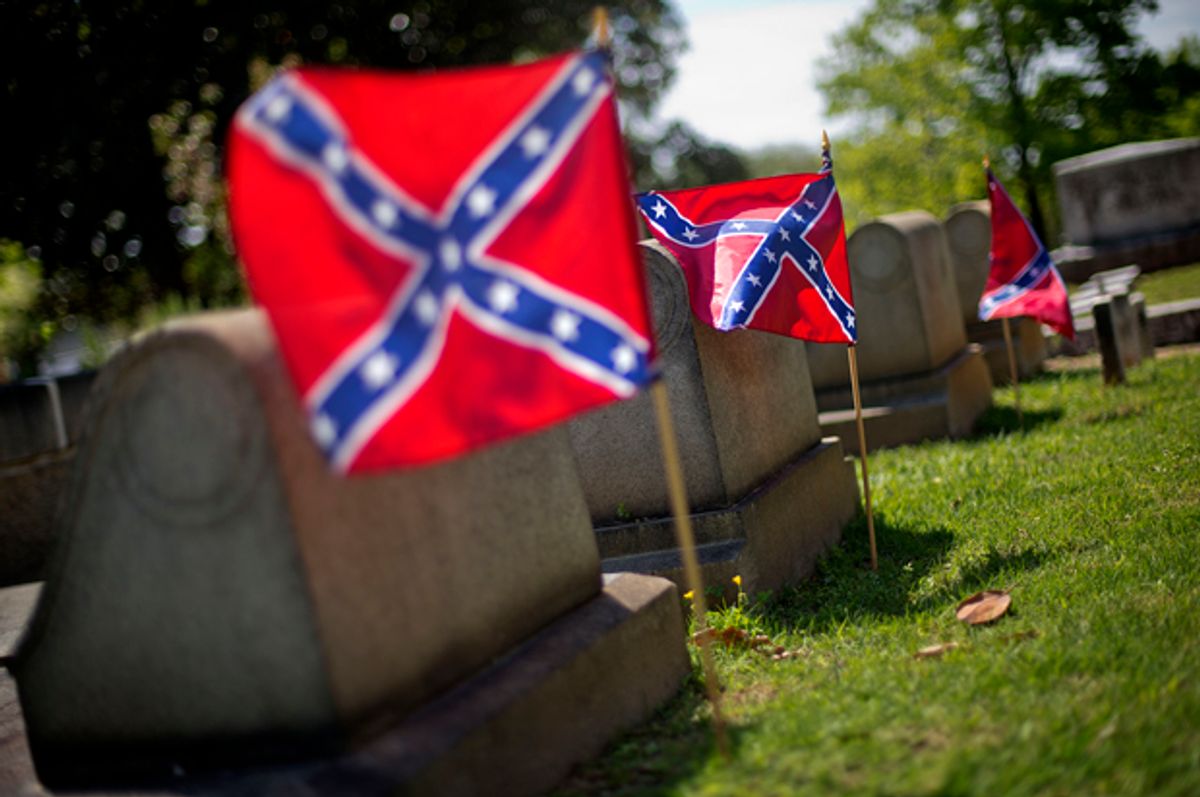 With the Confederate Battle Standard finally removed from the South Carolina Capitol grounds, many conservative commentators have expressed concern that the battle may not be over, that the movement to abolish public symbols of the Confederacy may spread to other monuments—for instance, renaming streets and public schools that honor white supremacists, or reappropriating landmarks and dismantling memorials that commemorate slave owners and segregationists.

Of course, these fears are not unfounded: There is such a movement underway. But what is perplexing is why anyone would find this to be problematic. Conservative claims that these actions amount to “whitewashing history” or “cultural cleansing” are beyond ironic.

It is whitewashing history, on several levels, to celebrate and honor the Confederacy independent of its subjugation of blacks. The so-called states’ rights narrative about the origins and meanings of the war are falsified by Declarations of Secession from the Southern states, and the words of Confederate leaders themselves—who left no doubt that what they were fighting for was the continuation of slavery. In fact, had they won independence from the North, the vision was to build an empire by conquering and enslaving the denizens of Mexico and Central America as well.

While it is true that there were issues related to the proper collection and allocation of taxes and tariffs, representation in the Congress, and the extent of federal sovereignty—most of these problems also turned on questions about the legal status of blacks (especially given that slaves constituted the majority of the population in many Southern districts, and the economy was heavily dependent on slave labor).

The developments that provoked outright secession were principally the Northern states' general refusal to enforce the Fugitive Slaves Act, along with concerns that Lincoln and the Republicans might ban slavery in any new states that joined the Union (even if they allowed existing slave states to continue the practice, for lack of viable alternatives).

That “Southern culture and way of life” the Confederates were so eager to preserve? It was entirely contingent upon the subjugation of blacks. Whites in slave states rightfully viewed emancipation as an existential threat to their livelihood, their culture and their very lives. They dreaded reprisals by newly freed slaves, be they political, economic or violent (they assumed the latter most often, given the “savage” constitution of blacks). For this reason, even those few Southerners who supported the abolition of slavery generally proposed dumping blacks back in Africa, rather than allowing them to live free and equal alongside their former oppressors.

Again, this is spelled out unambiguously by the very people who spearheaded the rebellion—so it is ahistorical to deny or minimize these realities. Conversely, the suppression of iconography romanticizing the failed revolt is not anti-historical, it is the way history works.

Most Confederate monuments were established after the Civil War—not during or before. The Confederate Battle Standard, for instance, did not gain prominence in the South until it was adopted by the Ku Klux Klan, and later, by segregationists (incidentally, segregation and Jim Crow were held up by Southerners as “states’ rights” in much the same way as slavery).

This is rather astonishing, if you think about it.

In the aftermath of a war, it is the prerogative of the victors to decide the legacy of the vanquished. And iconoclasm is almost always the order of the day. Some particularly marvelous vestiges may be allowed to survive—but it is virtually unheard of that the winner of a war would then allow widespread construction of new memorials paying tribute to those who just took up arms against them. It is beyond the pale that victorious forces would allow the rebels’ flag to fly at a state Capitol—the seat of government power.

There is not even an analogous model in U.S. history.

Where are the memorials to the large numbers of colonists who did not support breaking away from England? Where are the streets named after the Tories and the Redcoats who fought against Washington?

Where are the monuments to Americans who sided with the communists during the Cold War—even to the point of taking up arms and carrying out terrorist attacks to provoke revolution? Or for that matter, if trying to undermine or overthrow the federal government is such a noble cause, where are the parades for the Americans who have joined al-Qaida and ISIS (or the far more pervasive and lethal right-wing terrorists)?

Even Robert E. Lee, the commander of Confederate Forces, was avidly against displaying the Confederate flag, preserving Confederate uniforms or building monuments to their lost cause. He considered such behaviors to be a betrayal of the accord he signed on to at Appomattox—to be acts of treason against the new republic. Lee wanted all symbols of the rebellion to be destroyed in the service of national unity and reconciliation—and in keeping with the way that war is supposed to work.

When presented with these critiques, conservatives are eager to point out that many of the forefathers, including nine U.S. presidents, owned slaves. And as it relates to flags, “Old Glory” has also presided over many an atrocity—from slavery (both before and after the Civil War), to domestic apartheid, to bloody, exploitative and anti-democratic colonial and imperial aggressions abroad. Would not the same criticisms being lobbied against the Confederacy apply equally to these?

My answer is unequivocally “yes.” The South does not have a monopoly on oppression: Just as we cannot, in good faith, discuss the Confederacy absent slavery, nor can we approach the lofty ideals of the Union without brushing up against the grim realities that lie beneath.

In tandem with the Declaration of Independence’s claims that all are created equal and endowed by their creator with unalienable rights—we must note that the person who penned these lines was a slaveholder, that blacks were considered chattel until the 13th Amendment, that women were excluded from the political sphere until the 19th. We should be mindful of that on Independence Day as well.

When it is said that governments are instituted at the consent of the governed, with the purpose of promoting and defending human dignity -- we should remember that the Senate and the Electoral College were both designed to protect white male property owners from the will of the masses. That is, major elements of the government were established to protect white privilege rather than to promote freedom and justice for all. And in many ways, they continue to serve that purpose.

And when confronted with E pluribus unum we should acknowledge the challenges that new immigrants have faced, and continue to face, for equal rights and protections—struggling against the presumed entitlement of older settlers and their descendants. Or, much more important, that “the land of the free and the home of the brave” was predicated on the genocide and continued marginalization of indigenous Americans.

We should not be able to salute the flag without honoring the domestic labor of women: In addition to their other profound achievements and contributions, women have held the country together from the nation’s founding—but went largely unsung, undervalued and unappreciated … except when men were challenged to justify the status quo (much the same holds true today).

The exploitation and oppression of blacks, Native Americans, women and successive waves of persecuted immigrants were every bit as foundational to establishing the United States as the lofty rhetoric of our forefathers, or the clever strategies of military and political leaders, or the valor of those who took up arms. By focusing on the role of the “great men” who perpetrated or perpetuated these atrocities while overlooking the crimes themselves—this is indeed whitewashing history. We should not complain about “cultural cleansing” while remaining silent about ethnic cleansing.

Retain monuments to Confederates, slaveholders and segregationists—provided they are prominently identified as such on site, exploring the wide gap between their espoused ideals and their actions. Reappropriate landmarks celebrating the Confederacy: present them as cautionary tales about the horrors of viewing others as subhuman; memorialize victims of these ideologies rather than their oppressors.

Because recognizing these unpleasant realities is essential—not to undermine America and its accomplishments, but to advance them. It is precisely in these arenas that most significant stories about the United States are told, elucidating how we arrived here, how far we’ve traveled, and the work that still needs to be done. To quote the slave-owning forefather James Madison: “A people who mean to be their own governors must arm themselves with the power which knowledge gives.”