10 A-list actresses speak out about sexism: Has Hollywood reached a feminist tipping point? 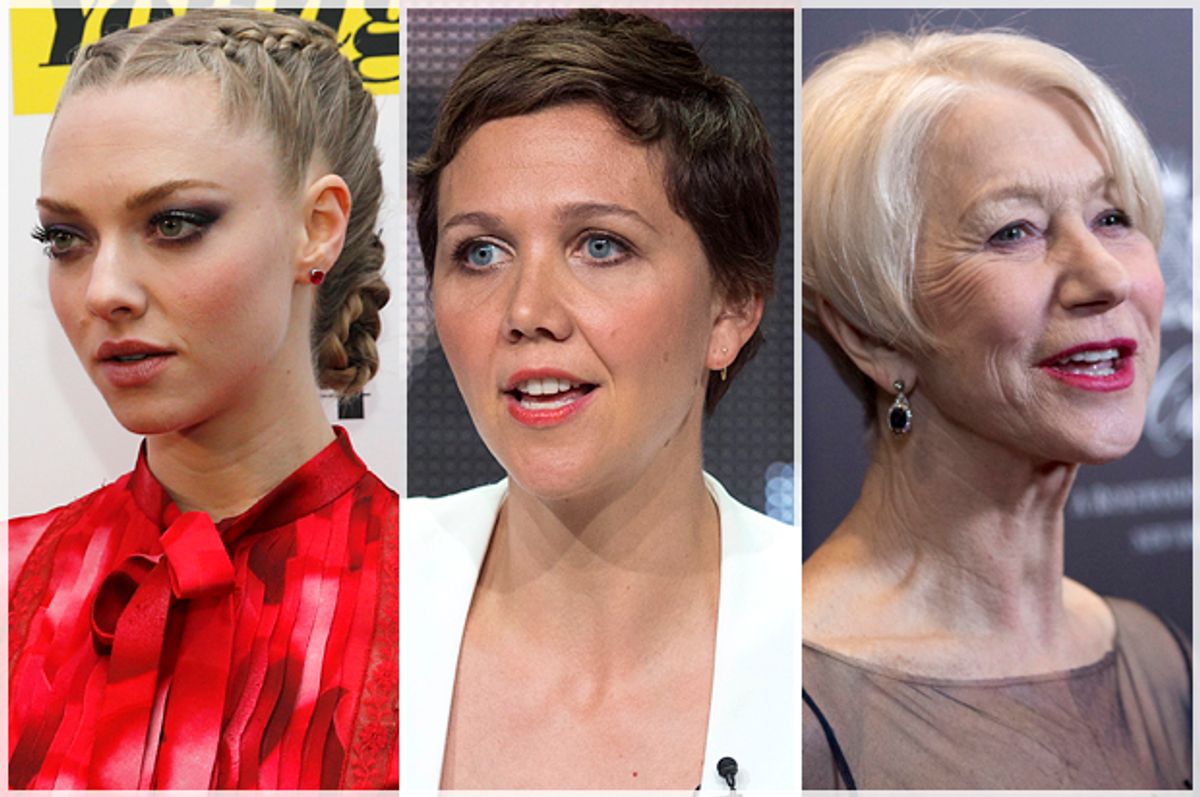 The past few months have been an unusually vocal period for Hollywood actresses. In the wake of the Sony hacks, which revealed that some of the industry's A-list actresses were often being paid much less than their male costars, and Patricia Arquette’s rousing Oscar speech decrying the wage gap, high-profile performers have continued to be outspoken about sexist practices endemic to the industry, using interview opportunities to share their own horror stories from their time in the field.

While Hollywood has a long way to go before gender imbalance is a thing of the past -- with last year's Oscars standing out as among the worst for women in years -- it is encouraging to hear Hollywood's most prominent screen stars increasingly dragging the issue out into the open. Here are 10 film and TV stars who have refused to stay silent this year:

Patricia Arquette
Patricia Arquette decried the wage gap in a rousing Oscar acceptance speech, proclaiming “To every woman who gave birth, to every taxpayer and citizen of this nation, we have fought for everybody else’s equal rights. It’s time to have wage equality once and for all. And equal rights for women in the United States of America.” While Arquette was criticized for short-sighted remarks she made backstage about LGBT people and people of color needing to support women, her speech was arguably the impetus for many other Hollywood women to speak out about the wage gap in the ensuing months.

Maggie Gyllenhaal
In an interview with The Wrap in May, Gyllenhaal revealed that she was once deemed too old to play a 55-year-old man’s lover. “There are things that are really disappointing about being an actress in Hollywood that surprise me all the time,” the actress said. “I’m 37 and I was told recently I was too old to play the lover of a man who was 55. It was astonishing to me. It made me feel bad, and then it made me feel angry, and then it made me laugh.”

Helen Mirren
Following up on Gyllenhaal's remarks at The Wrap's power breakfast, Mirren concurred that Hollywood has an age gap issue -- and has since the beginning of the industry. “It’s fucking outrageous. It’s ridiculous. Honestly, it’s so annoying. And ’twas ever thus. We all watched James Bond as he got more and more geriatric, and his girlfriends got younger and younger. It’s so annoying."

Viola Davis
In a great Hollywood Reporter roundtable, Viola Davis spoke out about her experience with typecasting, explaining how her role on “How to Get Away with Murder” was one of the few nuanced, sexualized roles she had ever been offered as a woman of color. As she put it, “There was absolutely no precedent for it. I had never seen a 49-year-old, dark-skinned woman who is not a size 2 be a sexualized role in TV or film. I'm a sexual woman, but nothing in my career has ever identified me as a sexualized woman. I was the prototype of the 'mommified' role.” She said it took a lot of courage to actually take on the part, telling herself: "OK, this is your moment to not typecast yourself, to play a woman who is sexualized and do your investigative work to find out who this woman is and put a real woman on TV who's smack-dab in the midst of this pop fiction.”

Gina Rodriguez
In another THR roundtable, the "Jane the Virgin" star revealed her own experience of objectification during the casting process. "I was up for a role and auditioned in character," she explained. "They're like: We love her. But can she come back in with a tight black dress?' I said, 'That doesn't make any sense for the character.' They were like, 'We need to know if you're pretty enough to be on the cover of a magazine.'"

Keira Knightley
A few months after posing topless on Interview Magazine under the condition she not be photoshopped, outspoken feminist Keira Knightley decried the dearth of female stories in Hollywood in an interview with Violet Magazine. “Where are the female stories? Where are they?” The actress asked. “Where are the directors, where are the writers? It’s imbalanced, so given that we are half the cinema-going public, we are half the people [who] watch drama or watch anything else, where is that? So yes, I think the pay is a huge thing, but I’m actually more concerned over the lack of our voices being heard.”

Anna Kendrick
Speaking to Glamour in June, the “Pitch Perfect 2” star decried sexist casting practices, saying: “There’s [a film I’m considering] now where I have to wait for all the male roles to be cast before I can even become a part of the conversation. Part of me gets that. [But] part of me is like, ‘What the f–k? You have to cast for females based on who’s cast as males?’"

Amanda Seyfried
In the Sunday Times earlier this week, the “Ted 2” star added her voice to the chorus of horror stories about the Hollywood wage gap, saying “A few years ago, on one of my big-budget films, I found I was being paid 10 percent of what my male co-star was getting, and we were pretty even in status.”

Halle Berry
Talking to THR, the "Extant" actress spoke about her years of struggle to be taken seriously in the industry as a woman and a person of color. "I started almost 25 years ago. Television was different, what women could and could not do was different," she explained. "And being a person of color, I was making a way out of no way. That was quite different than it is today for women of color. I also came from a modeling and beauty pageant background. And that didn't help at all with my credibility. I had to somehow find ways to shed that persona and to let the industry know that I was to be taken seriously. I had studied [acting], I was not just a model who said, 'Oh, now I want to act because what else do I have to do?' It took me years to build that respect within the community."

Laverne Cox
Time was on to something when they situated Laverne Cox as the vanguard of a "transgender tipping point" last spring. Over the past year, the "Orange Is the New Black" star has become an increasingly prominent cultural figure and a leading champion for trans women and the trans community. In a blog post responding to Caitlyn Jenner’s Vanity Fair cover, Cox spoke out about the pressures on trans woman to conform to oppressive cisnormative beauty standards. She writes, "I have always been aware that I can never represent all trans people. No one or two or three trans people can. This is why we need diverse media representstions [sic] of trans folks to multiply trans narratives in the media and depict our beautiful diversities."