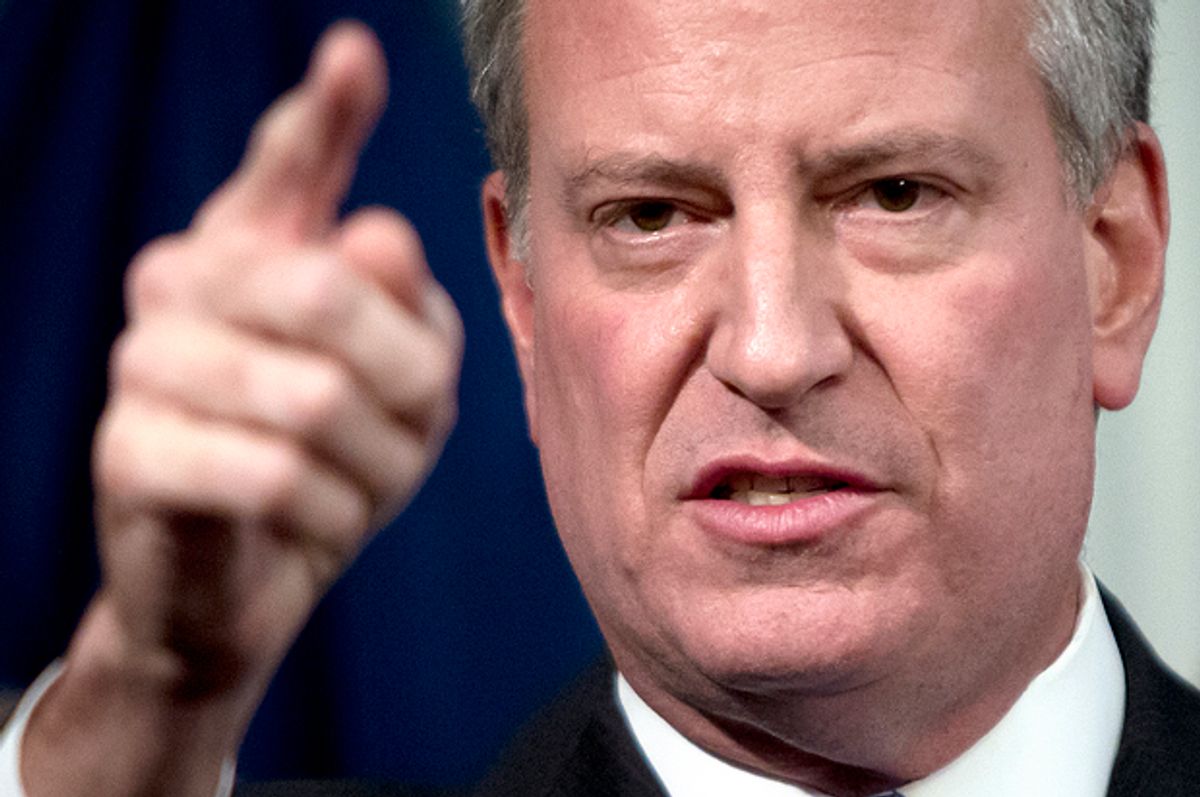 For years, inmates with non-violent felonies and misdemeanor charges in New York City had to sit in Rikers Island for months—even years sometimes—awaiting trial because they couldn’t afford to pay bail. Under the city’s new bail initiative announced by Mayor Bill de Blasio last week, some 3,000 low-level offenders are eligible for release without bail. They will be supervised by the city or by a non-profit organization in the community. The city estimates that 38,000 people were detained because they could not pay bail. Nearly 10,000 couldn’t pay $1,000 and 3,400 didn’t have $500.

While it’s a promising step, critics say it doesn’t go nearly far enough. The city’s bail system needs serious reform, but its policing tactics that led to a disproportionate number of arrests of blacks and Latinos are the more urgent issue. The New York Police Department dropped stop-and-frisk, but still practices "broken windows," a policing tactic that arrests people for low-level offenses like peeing on the street, disorderly conduct and trespassing. The New York Daily News reports that 81 percent of the 7.3 million people hit with summonses between 2001 and 2013 were black and Hispanic. Some of those summonses carry felony or misdemeanor charges that residents of non-black neighborhoods that aren’t hyper-policed don’t have to deal with.

Thena Robinson-Mock, a project director at the Advancement Project, a D.C.-based civil rights organization that addresses racial inequality in the criminal justice system, told AlterNet that New York City’s bail initiative doesn’t address why many people are being unfairly arrested and charged with crimes to begin with.

“Kalief Browder, who inspired a lot of this change, would not have benefitted from this new policy because he was charged with a violent felony,” Robinson-Mock said, referring to the case of the young man who was held three years in Rikers without trial and who committed suicide recently. “So, it captures non-violent and low-level felonies but not other charges. So when we start talking about the charges, we have to look at prosecutors. That is where we are seeing the racial bias play out.”

According to a recent study, 95 percent of the nation’s prosecutors are white, which Robinson-Mock says underlies the problem of why so many people who are stuck in the nation’s bail system are black or Hispanic.

Those who cannot pay bail face bleak futures even after their trial dates come up. Defendants held during the entire pretrial period are more likely to be sentenced to jail or prison and face longer sentences. The Justice Policy Institute published a study in 2012 arguing that America needs to abolish the practice of using money for bail altogether.

“The ability to pay money bail is neither an indicator of a person’s guilt nor an indicator of risk in release,” the study’s authors wrote. “The focus on money as a mechanism for pretrial release means people often are not properly screened for more rational measures of public safety: their propensity to flee before their court date or their risk for causing public harm. Meanwhile, those too poor to pay a money bail remain in jail regardless of their risk level or presumed innocence. Evidence suggests that up to 25 percent more people could be safely released from U.S. jails while awaiting trial if the proper procedures are put in place, including valid risk assessments and appropriate community supervision.”

Eric Sanders, a civil rights attorney and former NYPD officer, said bail has everything to do with defendants being able to afford good counsel who can defend them against bogus charges. He added that many of the stop-and-frisk and broken windows arrests in New York City are not only illegal but underdocumented.

“Take the number of times that are documented by a police officer and times it by 10,” he told AlterNet. “That will get you closer to the true number. Many stop-and-frisks and broken windows stops are not documented. Unless we deal with the issue of police interactions, the bail system and everything else is just a bunch of bandaids because we aren’t getting to the first part of the problem, which is police encounters.”

During his run for mayor, de Blasio vowed to bring serious, far-reaching reform to the NYPD but has since retreated from his hard-line rhetoric after facing fierce opposition from the powerful police department’s union.

“There is very little political traction to be gained there,” she said. “Politicians can pretty much ignore this issue altogether because they don’t want to be seen as the person who is light on crime or giving criminals the easy way out or any of these things people say when they are talking about criminal justice.”

Thena Robinson-Mock said de Blasio’s announcement is encouraging, but until serious debate focuses on what police officers and prosecutors consider criminal behavior, the city’s bail initiative won’t scratch the surface of why thousands of people are being unnecessarily detailed.

“Even if we can prevent one Kalief Browder from happening, that is a good thing,” she said. “I celebrate that. But, at the same time, knowing how flawed the criminal justice system is around how we perceive behavior of black and Latino people, I know this isn’t going to be enough to capture many of the people who are going to be lost in the system. I think we’re going to have to go a lot further and really think about both the arrest points and also what happens at the prosecutor point when these crimes are charged in the first place.”