Community Discussion: Do we need a global carbon price? 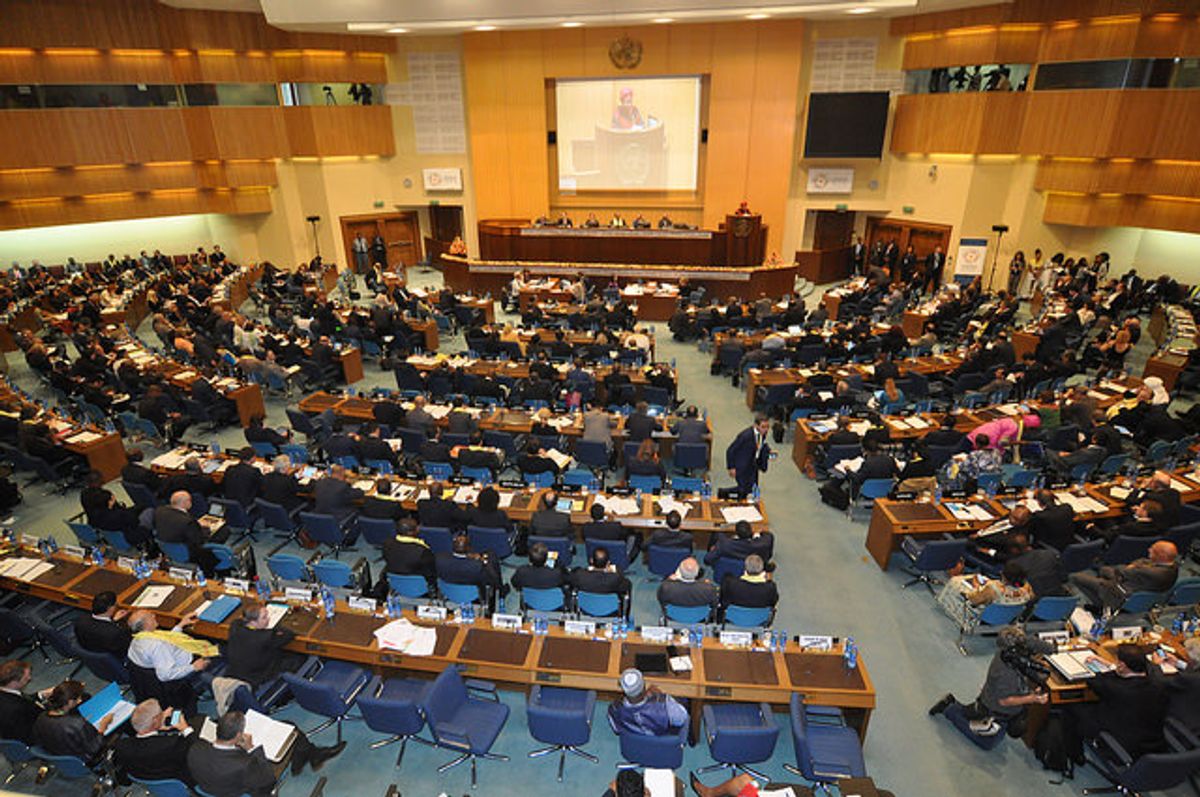 (Third International Conference on Financing for Development, via Flickr)
--

Progress towards the Paris climate talks continued with two other big conferences in the last two weeks. From July 7th to 10th, hundreds of scientists gathered in Paris' UNESCO building for the Our Common Future Under Climate Change conference, with the intention of summing up the current state of climate science immediately prior to the climate talks and laying out a vision for progress afterwards. Then this past week, from July 13th to 16th, Addis Ababa hosted the Third International Conference on Financing for Development, a high-level diplomatic conference intended to set an agenda for sustainable international development and to secure funding for that development. Both conferences were important steps towards a final agreement at Paris in December, and both seemed underpinned by notes of cautious optimism that the world is not yet out of time to prevent warming from topping 2 degrees Celsius, and dissatisfaction with the way that the negotiations are preceding.

One divisive issue that came up at both conferences was the global carbon price. Everyone from economists, policymakers, oil companies and the World Bank all seem to occasionally agree that the best way to keep carbon low is to make those that emit it pay to do so. They are then incentivized to emit less carbon, through reduction, efficiency gains or innovation. The two commonly understood ways of doing this are cap-and-trade systems and the carbon tax. Broadly speaking, a cap-and-trade system puts a top limit on the amount of carbon to be released and then assigns the right to emit some portion of that amount to polluters. If polluters want to emit more carbon than they are allotted, they must purchase additional rights on a market from polluters who aren't emitting as much. On the other hand, a carbon tax sets no upper limit on the amount of carbon to be emitted, but there's nothing given free -- all carbon emissions must be paid for. The pros and cons of both approaches are well and regularly explained elsewhere, and both have their advocates and detractors. The common downside to both, however, is that ideally everyone everywhere must set a price on carbon, or else everyone begins to worry about free-riders continuing to emit at will. Heavy polluting industries and a certain kind of politician don't help by regularly prophesying that pricing will result in economic doom. This is what has repeatedly done in the United States's efforts to establish a cap-and-trade system, and the excuse Tony Abbott used when in 2014 he repealed Australia's carbon tax, the first national carbon tax in the world.

At the science conference in Paris, the loudest voice speaking for a carbon price was Nobel laureate economist Joseph Stiglitz, a long-time proponent of a carbon price. Trashing the voluntary emission cut commitments being made by the nations ahead of Paris, he called the climate talks a "charade", inevitably doomed to failure. "In the absence of more forceful actions, voluntary actions simply don’t solve problems of global public goods," he later told Bloomberg. The answer is a single, enforceable global price on carbon, with a carbon tax being his own preferred method. Fabiola Ortiz at RTCC.org found many agreeing, with Carlos Nobre, of Brazil’s National Space Research Institute calling the negotiations a "global poker game where no one wants to show their cards." At environmentalresearchweb, Liz Kalaugher heard Ottmar Edenhofer, one of the co-chairs of the IPCC working group on climate change, further extol benefits of a carbon price. "Many people ignore one important advantage [of carbon pricing] – you can get revenues." A carbon price "could help us deal with both the climate problem and the poverty crisis; we have this option and we should take decisions according to that."

Edenhofer seemingly would have fit right in at the development conference in Addis Ababa, where everyone was scrambling to find cash and where carbon pricing received strong support from no less that Angel Gurria, the Secretary-General of the OECD. “Putting a big fat price on carbon dioxide and other emissions is imperative” he said, going on to slam the astronomically high subsidies handed out to fossil fuels. Skipping to the inevitable end, of course the final "Action Agenda" made no call for a global carbon price, apparently on the objections of Saudi Arabia, the United States and the United Kingdom. Carbon pricing is only vaguely mentioned as one possible means of raising revenue for development. Attention is meanwhile lavished on the benefits of a global tax on tobacco, which is certainly admirable but also serving to illustrate that such agreements aren't impossible. Even more disappointing, the Addis conference barely avoided taking an important step that might make a global carbon price actually enforceable: a global tax body, administered by the UN and regulating international tax law. Developing nations lose more money to tax avoidance than they receive in aid, with multinational corporations being a prime culprit. As Tove Maria Ryding explains at the Guardian, international tax law is currently set by the OECD, who have built a system of loopholes and exclusions that force all nations into a "race to the bottom", competing to throw benefits and tax breaks at corporations. A global tax body would bring an end to all this confusion, the same confusions that habitually block progress on a global carbon price. Naturally none of this made it into the Action Agenda either. Wealthy nations, spearheaded by -- you guessed it -- the United States and United Kingdom, used procedural tricks to cut off debate on the issue, presumably leaving everyone who isn't a member of the OECD fuming.

But perhaps the wealthy nations are right. Not necessarily about the OECD doing a good job, but about the lack of a need for a global body to run things. Back with the scientists in Paris, Andrew Revkin of the New York Times detected little disgruntlement with how the climate talks were preceding. The assembled scientists largely recognized that a "top-down" treaty with a one size fits all solution wasn't going to work. The voluntary emission cut commitments made by the nations, each with their differing goals and methods, are reasonable adaptations to different and evolving circumstances. Revkin admiringly cites Professor Frank Geels, who thinks the emphasis on carbon prices is a "delusion." Geels characterizes as "dangerous" a technocratic approach, with governments only listening to experts and modelers informing them of the best approach. It's better to encourage engagement and energy literacy among ordinary citizens and have them put pressure on governments. "Technology and social innovations just aren't modeled very well," he concludes. "It's better to look at what's going on on the ground and asking how we can accelerate these dynamics." Chinese development expert Zhu Daijan slightly disagreed, pointing to cultural differences. China might do better with a government-driven, top-down approach, Europe might need a bottom-up, civil-society solution, and America a market-driven solution. "We should have the same target but different models of social and governance networks on this kind of issue.” In essence Daijan and Geels seem to be agreeing -- the world is a diverse and unpredictable place, and no one solution is going to fit everywhere and forever. Perhaps instead of forcing a global battle over a carbon price and a sufficient means of enforcement, we should be putting pressure on governments to stick to their promises and keep their commitments regularly updated as circumstances evolve.

Where do you stand? Are you for a global carbon price, and if so how do you think it could be achieved and enforced? Or do you think that a global price is unnecessary, or even problematic? How do you see the world ensuring that nations carry through on the promises they have made? Let us know in the comments!