Danielle Brooks' bikini-ready body: Why seeing the "Orange Is The New Black" actress in a two-piece matters 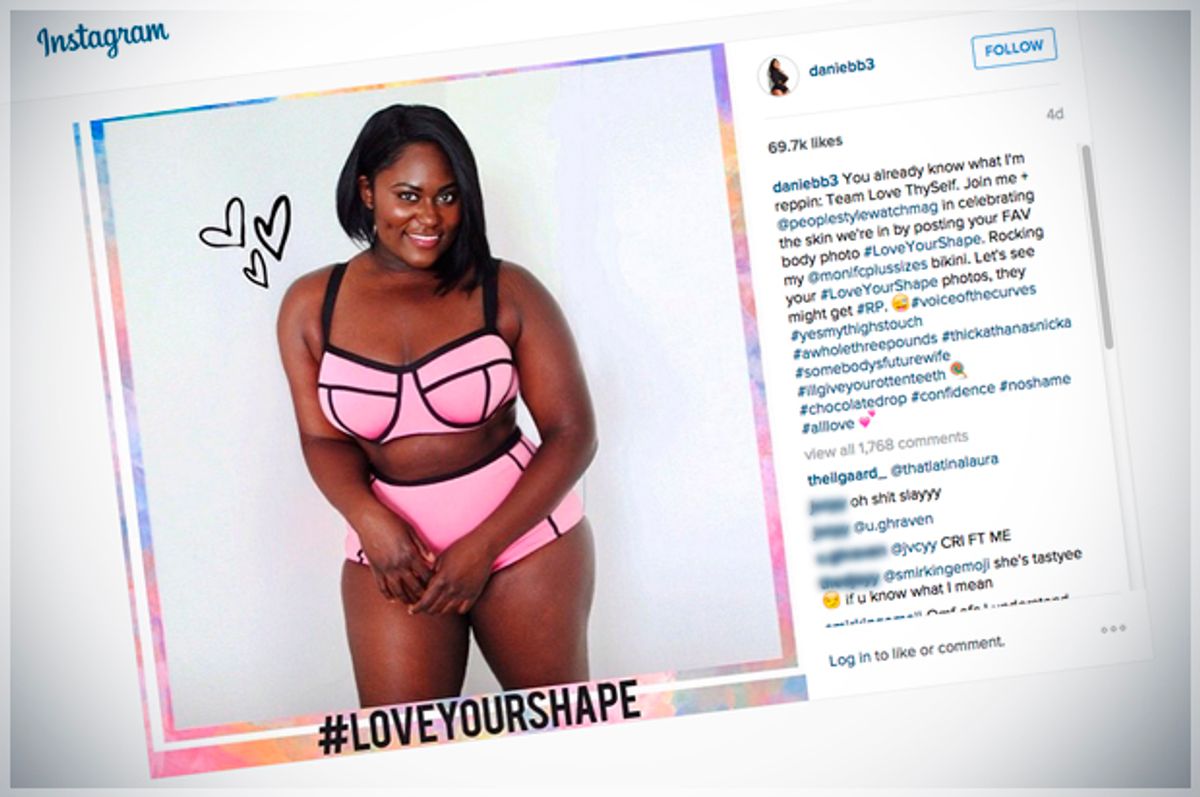 "Orange Is The New Black" actress Danielle Brooks, who plays Taystee on the show, is proud of her curvy body and wants you to know it—and celebrate yours. On Monday, Brooks posted a photo of her in a Monif C. Plus Sizes black and pink bikini as part of People Style Watch’s #LoveYourShape campaign, encouraging users to share photos of themselves with that same hashtag, which they’ve done with style.

Some of the hashtags she included with the photo: #yesmythighstouch #thickathanasnicka #somebodysfuturewife and #noshame. The post now has almost 70,000 likes, proving that our culture is in need of images of women, especially this swimsuit season, who are haven’t whittled themselves down in order to wear their bathing suit of choice. This is in marked contrast to the barrage of fitness advice saying things like, “We've got the ultimate workout to help you slip on a bikini with confidence” to a world where the phrase “thigh gap” even exists. Women like Brooks are encouraging confidence first; working out, which Brooks also does, is a separate matter, not a commentary on ways she wants to change her body.

Brooks’ campaign is a major achievement for both her and young girls and women who look up to her. Brooks has written that as a teenager, she was so troubled by not fitting in with how our culture defines beauty because she thought she was “too dark, too curly and too fat” that she had suicidal thoughts.

In an essay for Glamour, Brooks wrote about how Hollywood and media need to do a better job of reflecting the reality of what women’s bodies look like:

"Being in the public eye magnifies my 'imperfection' to an insane degree. Attending the Golden Globes for the first time, I was aware that the majority of the other actresses in the audience didn’t look like me. But you see, the average woman is a size 12 to 14. Those actresses don’t look like most women. I’m not saying those actresses should gain 30 pounds, but I am posing the question, that if art is supposed to reflect life then why don’t the red carpets and magazines reflect reality?"

This is a particularly apt time for Brooks to be sharing her version of loving her body, given that Instagram banned the hashtag “curvy” this week, citing violations of their terms of service because images with nudity were being tagged with it. This angered body acceptance activists like blogger Sarah Chiwaya of Curvily, who told Business Insider, “The idea that all bodies are beautiful and worthy of respect is starting to take hold in a way it never has before," she said, "and a big reason for that is the increased representation of different body types on social media. For Instagram to stomp all over one of the most popular hashtags for women above model size is incredibly disappointing.”

Changing beauty standards to include women of various sizes isn’t going to happen with just words; we need to see women like Brooks proving that they can flaunt whatever fashion they want to. That’s not to say women, or men, should be required to love every aspect of their bodies every minute of the day, but rather that we deserve a range of bodies being held up as desirable, rather than a single thin white standard. As Instagram user thecurvycutieg wrote below a joint image of her in two different bikinis with “Bring Curvy Back” emblazoned over them, “All bodies are beautiful ALL BODIES ARE BEAUTIFUL yet when young women are doubtful in themselves, or are looking for #bodygoals you literally stomp over the images they have to look at and see themselves.”

Or as Instagram user curvybadgebunny put it beneath her torso in a photo of her in a hot pink and black corset, “This is my small protest against Instgram recently banning the hashtag #curvy. Why? Because there was too much nudity, and curvy nudity is not acceptable. You can, however, still search #curvyfit, because the only good fatty, apparently, is a fatty who’s trying.”

While Instagram defended their decision, the backlash just may be vocal enough for them to change their minds. Even if it’s not, the #LoveYourShape campaign is an important addition to the wave of recent online activism in support of the simple but vital message that women of any size should be able to wear what they want without being told they’re “too” anything. It’s also a positive message because it’s not just about weight or curves, because those certainly aren’t the only thing women are told they need to change to be beautiful.

Given that a recent survey of 500 UK women reported by Today found that 40 percent said they’d feel more confident if they had a thigh gap, and 65 percent who had a thigh gap said they’d feel fat without it, we need campaigns like this, featuring both celebrities like Brooks and non-celebs, to help counter all the fat-shaming that happens every day. Photos are a powerful way of sending messages of self worth to ourselves and our peers.

Witness Instagram user chibipyro, who wrote that a friend told her about her bikini wearing, “You have a lot of courage to wear that, I would never be able to do that. I’m not brave enough.” Chibipyro added that she doesn’t feel brave, but “I've realized that tomorrow is not guaranteed so why not appreciate things now rather than later?! I'm working towards getting healthier but It doesn't make sense to me to wait for something I can do now.” That’s precisely reason we need a campaign like #LoveYourShape, one that doesn’t require buying any new clothes, sweating at the gym or comparing yourself to others, but simply embracing your body, whatever it looks like, long enough to snap a photo.