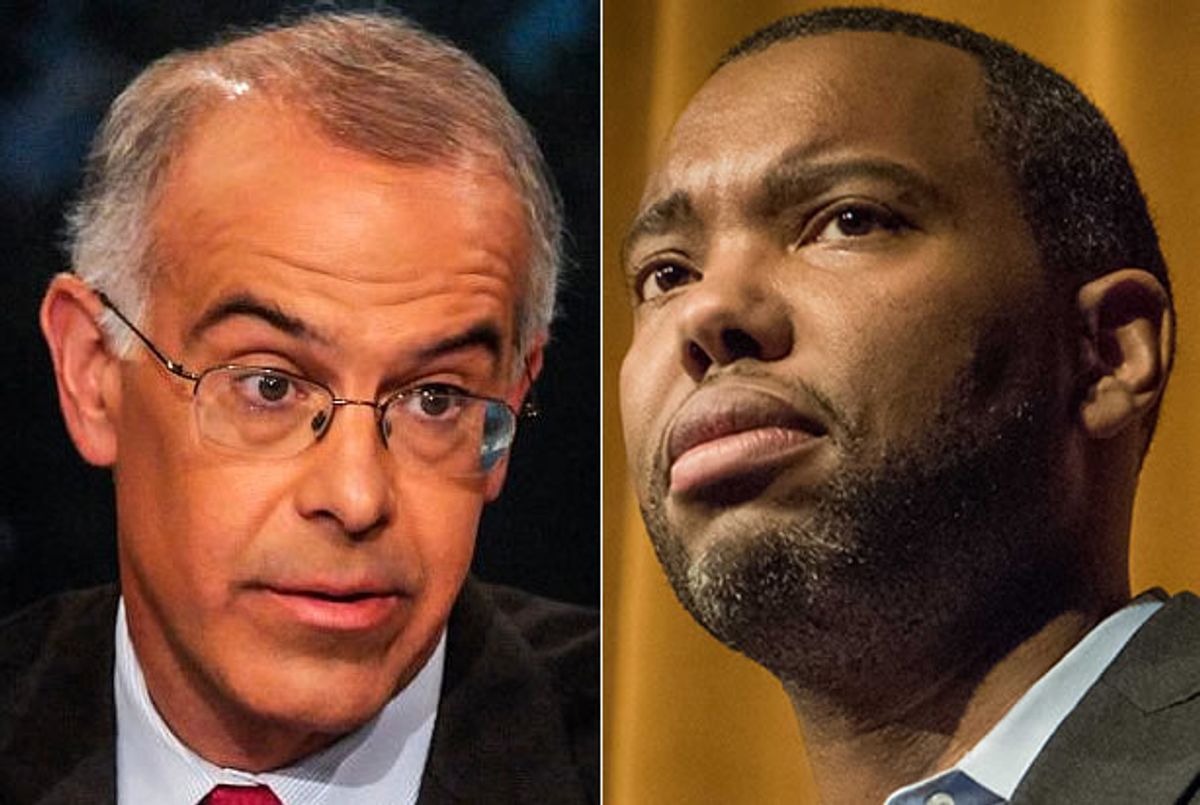 The New York Times' moral scold David Brooks took time out from his very busy schedule to write a letter to Ta-Nehisi Coates about the problems white people will have with his new book, "Between the World and Me."

That's not to say Coates is particularly interested in what white America in general thinks about his book, much less David Brooks in particular -- nor in the case of the latter, should he be.

Brooks no doubt thought it clever to mimic the epistolary style in which "Between the World and Me" was written, but he apparently isn't aware that writing a letter to one's child, as Coates did, isn't likely to appear nearly as condescending as, say, a white male directly addressing a black man in the pages of the New York Times with questions like "Am I displaying my privilege if I disagree? Is my job just to respect your experience and accept your conclusions? Does a white person have standing to respond?"

He somehow doesn't seem to understand that if you have to ask those questions, you damn well already know the answers to them. But the condescension of the privileged is a many blinkered thing, so it's not surprising that it appears in many forms throughout Brooks' "letter."

There's the knowledgeable lecturer -- "You obviously do not mean that literally" -- and the old man with children on his lawn -- "You reject the dream itself as flimflam." There's the backhanded compliment -- "You've filled my ears unforgettably" -- and the historical apologist -- "There's a Lincoln for every Jefferson Davis." And then there's whatever this is -- "The last year has been an education for white people."

Making black deaths at police hands about the education of white people is an asymptotic display of white privilege. I take that back -- it doesn't just approach, it actually aspires to whatever the infinite expression of white privilege should be. And it's the first sentence in Brooks' "letter," serving as an inspiration for all the ignorant ones that come thereafter, about which I can't put it any more eloquently than NPR's Gene Demby:

That his beloved abstraction -- "the American dream" -- might be a daily nightmare for millions of his fellow citizens is a point someone who castigates Coates for "excessive realism" is never likely to understand. But I suppose it's all well and good to talk about "transcend[ing] old sins for the sake of a better tomorrow" when the only place you're likely to encounter the legacy of them is on the way home from the airport.

Abandoning reality for being too "excessive" is basically his job, after all.

UPDATE: The original version of this argument identified Brooks as a "professional taxi cab passenger." That, of course, is the Times' other professional contrarian, Thomas Friedman.