It's time to draft Al Gore: If Democrats want to win, it's clear neither Hillary nor Sanders is the way 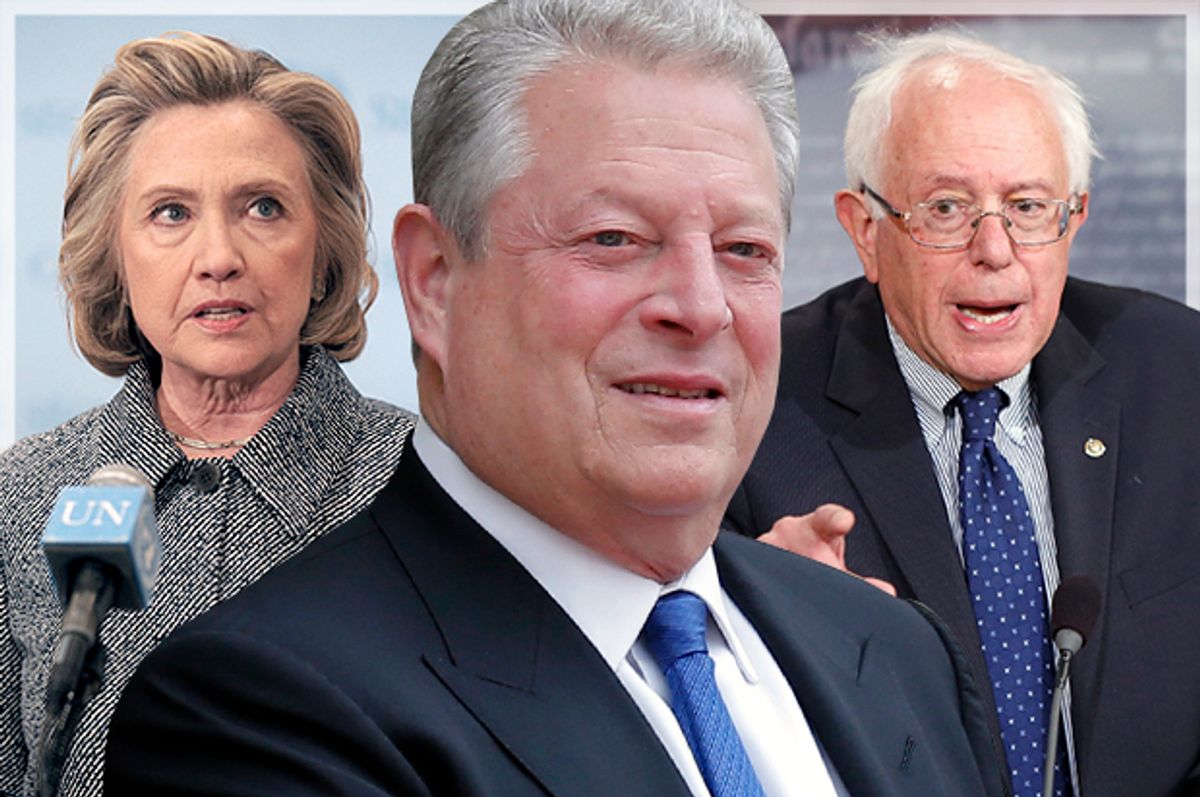 The presidential election is still sixteen months away, but this much is clear: Hillary Clinton is a vulnerable candidate.

Since announcing her candidacy in April, Clinton’s stature has steadily slipped. Things got even worse this week. We learned, first, that Bernie Sanders eclipsed Clinton in small, individual donations, which is an indicator of popular support among likely voters.

Second, and more problematic, the newest AP poll revealed significant weaknesses among Democrats on a host of issues, including trust, character, and compassion for average Americans.

These numbers are alarming heading into the general election, especially for Democrats. Bernie Sanders is running an important campaign, but it’s very difficult to see the entire party rallying around him.

The only other credible candidate being mentioned is Joe Biden, but there’s no evidence that he wants to run. Besides, he’s failed twice already and is still grieving after the loss of his son, Beau Biden.

Sure, the GOP field is studded with unserious candidates, but they still have a relatively deep bench of big-state governors and prominent senators. To win, therefore, the Democrats need a nationally viable candidate.

Enter Al Gore: the one person on the left, apart from Clinton and Biden, with the cachet to bridge the establishment and progressive wings of the party. Here are 10 reasons why a Gore candidacy makes sense, both for the Democratic Party and the country.

1. Stature. Gore is a superstar with impeccable qualifications. The GOP will have a hard time marginalizing someone of his caliber and experience. His background speaks for itself: a former Congressman, U.S. Senator, and two-time Vice President. He’s even succeed wildly in the private sector as a businessman -- something Republicans can’t help but praise. In short, Gore passes the credibility test by any measure, and that matters in a national election. Hillary Clinton is the only other Democratic candidate who can match Gore on this front.

2. Vulnerability. As the new AP poll shows, Clinton’s unfavorability ratings are rising among Americans overall and among Democratic voters in particular. Indeed, her positive marks have plummeted from 81% to 70% among Democrats since April. Worse, as the AP noted: "Just 39 percent of all Americans have a favorable view of Clinton, compared to nearly half who say they have a negative opinion of her." Hard to win with numbers like that.

These numbers are consistent with another recent poll, which confirmed that Clinton’s lead over the Democratic field has shrunk considerably over the last several months. Some of this is the result of Clinton fatigue, but it’s also due to the rise of Bernie Sanders. The left wing of the party is flocking to Sanders, in part, because they don’t trust Clinton’s centrist record. Gore, on the other hand, who has become much more outspoken since leaving office, could embrace much of Sanders' populist platform while also selling himself as a more appealing national candidate. That’s a strong case on his behalf, one many Democrats will find persuasive.

3. Besides Hillary Clinton, no one running as a Democrat is likely to challenge Republicans in a national election. Sanders is a regional candidate at best; he shouldn’t be, but he is, and that’s not changing next year. The other candidates scarcely warrant mentioning: Martin O’Malley, Jim Webb, Lincoln Chafee - these guys are political ornaments, running for reasons known only to their friends and families. Gore is a national figure, however. He can rival any GOP candidate in terms of fundraising prowess, party support, organizational acumen, experience, and name recognition. He’s also become something of a rock star post-politics, winning a Nobel, an Oscar, and an Emmy. Gore, in other words, is the perfect package, both politically and professionally.

4. Independents. Gore, justifiably or not, is less polarizing than Clinton, which means he can appeal to independents. Although they’re manufactured scandals, issues like the private emails at the State Department and the Benghazi fiasco will plague Clinton in the general election; Republicans (duplicitously, of course) will use these non-issues to bludgeon her month after month, debate after debate, ad after ad. This is pure nonsense, but it will be a distraction nevertheless. Gore, alternatively, brings less comparable baggage - that makes him a harder target for the GOP.

5. Foreign policy. Hillary Clinton is right about a lot of things, but foreign policy isn’t one of them. After our recent misadventures in the Middle East, this really matters. On all things foreign policy, Clinton has a habit of flopping with the political winds. Her maximalist, borderline neoconservative positions at both the Senate and the State Department are a particularly disturbing example of this. Indeed, she beat the war drums on Iraq, Syria, and Iran at one point. In short, Clinton is a hawk, and most of us have seen enough of that in the last decade or so. Gore’s absence from politics during this period gives him a distinct advantage: he wasn’t complicit in our recent geopolitical blunders. He also opposed the Iraq War, something Hillary and the GOP candidates can’t say.

6. The corruption of the political process by Wall Street is -- and should be -- a major issue in this election. Everyone knows already how much influence the financial industry has in Washington. Hillary Clinton, to her credit, has talked quite a bit about income inequality and political corruption, but the fact remains: Wall Street loves her. This ought to make Democrats uncomfortable. Gore, admittedly because he hasn’t run for office in years, has not relied on Wall Street for campaign funding -- at least not in recent history. If nothing else, this is a mark in Gore’s favor, and another reason for Democrats to get behind his campaign.

7. Climate change. As Ezra Klein argued a few months ago in a column about Gore, “Income inequality is a serious problem…But climate change is an existential threat.” Gore, whatever you think of him, is an unimpeachable authority on climate change. As Klein wrote, “When it comes to climate change, there’s no one in the Democratic Party - or any other political party - with Gore’s combination of credibility and commitment.” Given the president’s unique ability to make a difference on an issue like this, it matters a great deal who wins this election. We can’t say definitively what Hillary Clinton would or would not do about climate change, but we can be fairly certain that Al Gore would do more than any other potential candidate for president.

8. Gore has nothing to lose. Having been out of politics for so long, Gore is liberated in ways no other candidate is. He’s got no recent voting record to scrutinize (read: distort); he’s independently wealthy and well-connected; and his private sector activism has allowed him to take authentic positions on issues that matter to him - and most Democrats. He’s beholden, in other words, to fewer constituencies than anyone else currently running. Perhaps most importantly, because he’s succeeded to such a degree in his post-political life, we’ve every reason to believe he’d feel empowered to take chances and risk failure. Isn’t that the candidate most people want?

9. Vengeance. If we’re stuck with a rerun election (Clinton vs. Bush), most would prefer to see Gore get his vengeance against another Bush. Gore, you may recall, was elected president in 2000 over George W. Bush. For reasons we won’t get into now, that victory was stolen from Gore in Florida, thanks in no small part to Jeb Bush, who was then governor of that state. With Jeb the likely Republican candidate next year, it would be a delightful bit of Karmic justice for him to lose to the man he robbed 16 years prior.

10. Democrats need a spark. Gore may not be new, but his candidacy would feel that way. His political life seems a distant memory at this point, but his activism and business savvy have kept him in the public consciousness. As with most politicians, moreover, the freedom of not having to run for office has done wonders for Gore’s image. His entrance and voice would only enliven the Democratic Party, which is exactly what it needs in an election decided, overwhelmingly, by voter turnout.