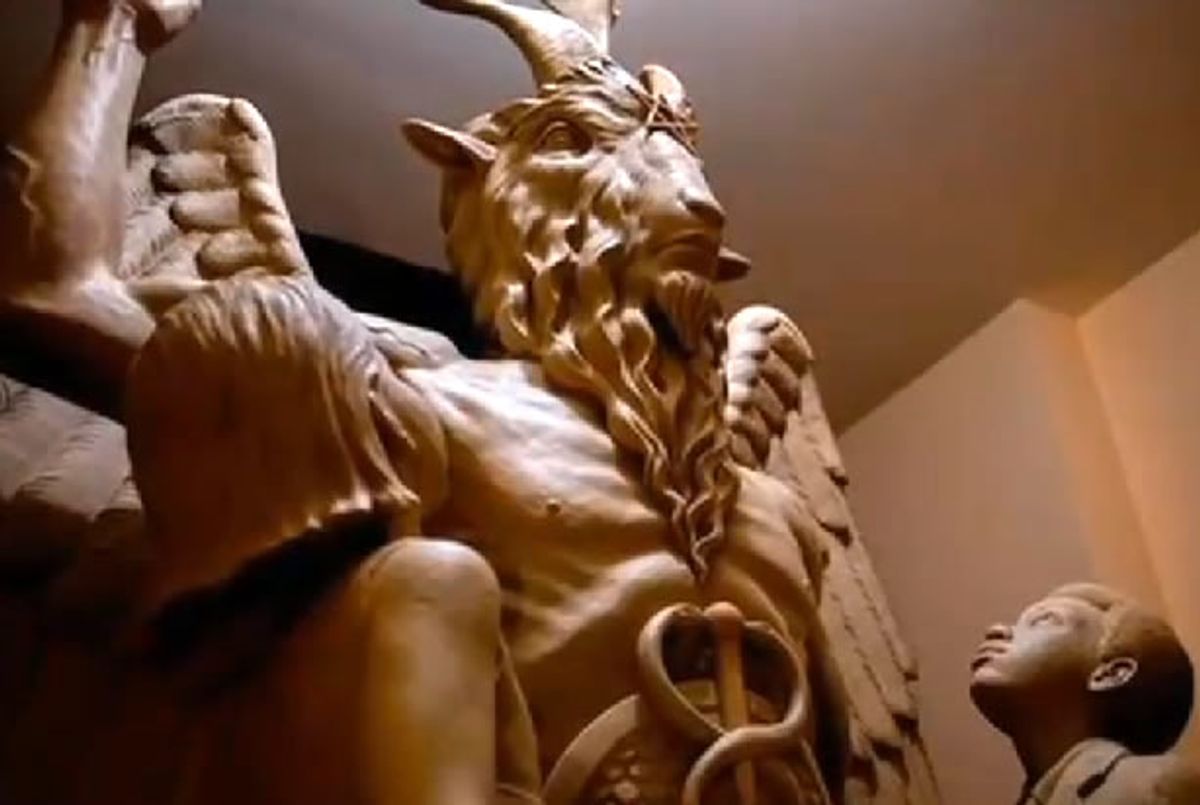 The Satanic Temple will soon be unveiling the statue of Baphomet that was originally intended for Oklahoma -- until the state Supreme Court ruled that a Ten Commandments monument had to be removed from capitol grounds -- or at least, they will be if the Christian groups threatening it don't "burn it down" first.

The statue's first home in Detroit was to have been Bert's Market Place, but owner Bert Dearing returned the Satanic Temple's rental fee after he learned that the group was affiliated with satanists. "When I rented the place, I just thought it was a church," he told ABC News. "I didn’t know about the unveiling of a statue. We weren’t aware they were into devil worshipping."

The Satanic Temple's co-founder Lucien Greaves isn't buying that, because as he told Hemant Mehta Thursday evening, "the very contract specified that we are the Satanic Temple."

The person responsible for this campaign, Greaves told Salon, is most likely Pastor David Bullock of the St. Matthew Baptist Church. "The last thing we need—in a city where we're fighting against violence and fighting against economic problems and unemployment and the water crisis—is a statue dedicated to Satan right downtown," Bullock told Christianity Today earlier this week. "They're bringing a Baphomet statue to the city of Detroit valorising, elevating Satan. This is not even a real religion in my estimation."

Bullock appeared alongside the Satanic Temple's Jex Blackmore on FOX2 News' "Let It Rip" to discus the matter, but he wasn't more interested in talking over her about the "need for dialogue" than actually having a discussion.

"The statue is supposed to create a dialogue," he said, "but statues don't talk. If you want to have a dialogue with other faiths, send an email in advance or knock on a door."

Blackmore noted that she did, in fact, attempt to contact Pastor Bullock as soon as she learned of his attempt to thwart the statue's unveiling. "You've started a protest against an organization that you clearly nothing about," she said. He did not appreciate being called ignorant, and made his displeasure known.

The hosts of "Let It Rip" demanded that Bullock allow Blackmore to outline the tenets of her belief system, but he continued to talk over both them and her, saying "these people are calling themselves 'satanists' and they have a political agenda in the name of the devil."

"It never occurred to us that some random Pastor, of whom we had no previous knowledge, would believe it our duty to ask his permission for us to hold our own private, ticketed event," co-founder Greaves told Salon. "Clearly, the burden of 'reaching out' was on him if he cared to engage in an informed dialogue before organizing protests against us, spreading misinformation about our activities, and calling for our event to be shut down."

Greaves also spoke of attempting to contact Bullock on numerous occasions and ask him to publicly condemn the threats of violence against the Satanic Temple. They were in vain, he said. "Pastor Bullock's failure to condemn the violent threats being hurled at us, while he still promotes an organized protest against us, must surely be seen as a tacit endorsement of those threats."

"Freedom of Speech, Freedom of Religion, and Freedom of Assembly mean nothing if we can not learn to accept their value in protecting even -- perhaps especially -- those views with which we disagree. While the modern Evangelical Right increasingly strives to deify the Founding Fathers, wrapping the cross in a flag and claiming the Constitution as Holy Writ, it takes but a lawful (though admittedly decadent, elaborate, and bizarre) Satanic celebration to strip away the cheap façade, revealing them for the stale theocratic oppressors they aspire to be."

The location of the unveiling will remain a secret for the time being, as members of the Temple have no assurance of the statue's, the venue's, or for that matter, their own safety.

Watch the Pastor and Blackmore's entire "dialogue" below via FOX2 News.