Will Arnett, Amy Sedaris and Alison Brie return to Netflix as entertainment animals with all-too-human problems 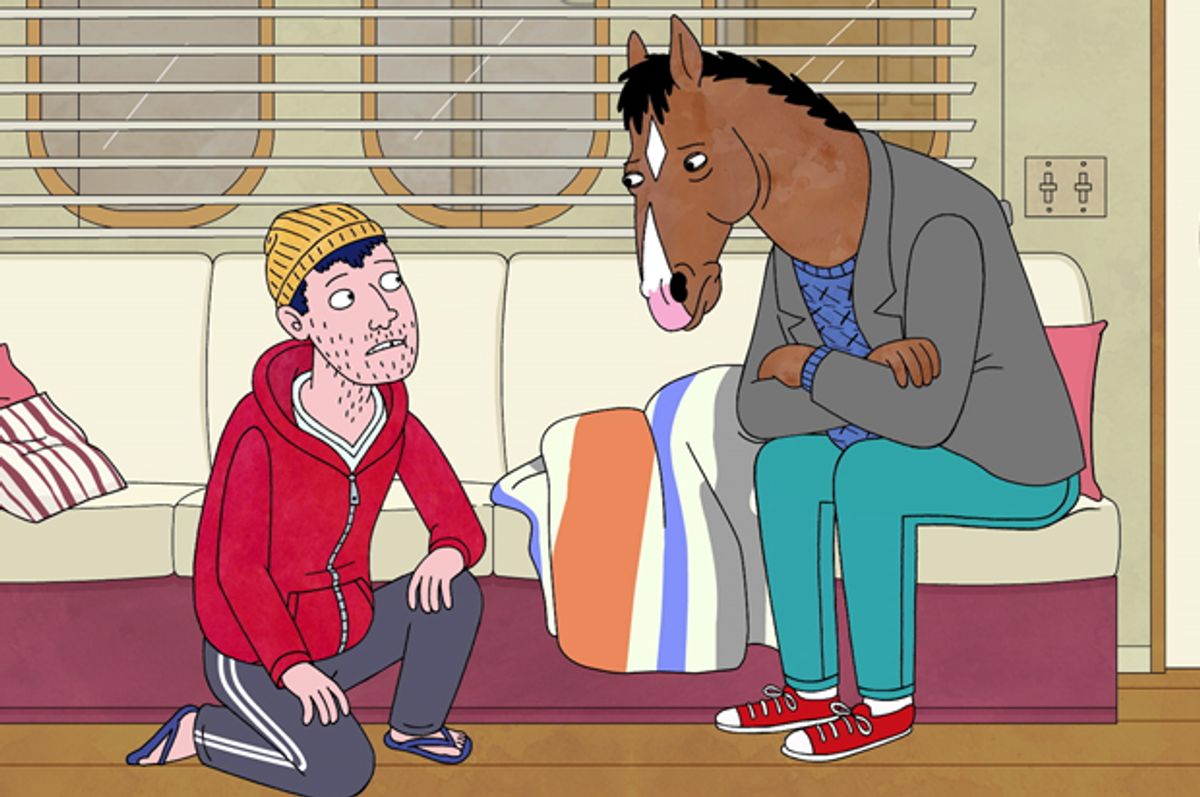 Animation is so often the province of children because it’s a medium so well-suited to the fantastical, horrible and surreal. Princes can transform into beasts and princesses into mermaids with just a few strokes of a pen; the violence of blows can be illustrated with radiating bolts of jagged light, punctuated by stars or little birds flying in circles around a character’s head. Computer-generated imagery attempts to make the fantastical real—to bring to life the wonder or horror of Ant-Man becoming subatomic, or a raptor taking a bite out of an unsuspecting side character. Animation has no such designs on the audience’s willing suspension of disbelief. If you’re watching, you must buy in to the unreal: Talking fish, magical gems, dogs that can change their size and shape effortlessly. It’s a medium of pure play; the point is primarily to be awesome.

Animation for adults, then, has always been a little bit of a twist on the form. Shows like “The Simpsons” and “Family Guy” are essentially sitcoms with very different production values. A show like “Archer” might take advantage of animation by placing its characters in a new foreign locale every few episodes, or drawing humor out of Sterling Archer’s apparent ability to get shot 15 times and still crack jokes. But it’s a subtler kind of fantasy. “The Simpsons” and perhaps even “Bob’s Burgers” offer an animated family as a universal family, eschewing the inevitable politics of casting on-screen actors. All of these shows have their merits—well, maybe not “Family Guy”—but their relative normalcy might be why “Adventure Time,” on Cartoon Network, has captured the hearts and minds of adults and kids alike. It definitively “arrived,” five seasons in, when Emily Nussbaum covered it in the New Yorker—writing that because the show is “childlike, nonlinear, poetic and just outside all the categories that the world considers serious, it’s television that you can respond to fully, without needing to make a case for why.” I’m less onboard with her description of “Adventure Time” as “druglike”—though I get it, stoned animation is its own multilayered world, crowned by “Aqua Teen Hunger Force.” But as she describes, animation that combines naiveté with fantasy is its own kind of transporting wonder; maybe this is why decades later, we still can’t let go of Disney films.

Right now there are a lot of worthy animated shows, ostensibly for children, that enter that space of genius-level creative immersion—I have been remiss on writing about “Steven Universe,” but, you guys, “Steven Universe”!—but what’s fascinating about Netflix’s “BoJack Horseman” is that the show is entering that space of surreality in a thoroughly and decidedly adult way. Where other shows play with magic weaponry and middle-school crushes, “BoJack Horseman” uses alcohol, casual sex and drug addiction to build its landscape. But the result is still comparably wondrous. Netflix released the second season of the show Friday morning, and from the first several episodes released to critics, the second season is so far even better than the first.

Partly, the second season feels stronger because “BoJack Horseman” is very much an acquired taste. It took me a solid six episodes to fall under the show’s spell, largely because I was continually navigating the show’s split personality—it’s not entirely full of awe, like the children’s cartoons I’ve mentioned, or entirely without magic, like the adult cartoons I’ve grown used to. “BoJack Horseman” is a show about an actor named BoJack Horseman, who is a man with a horse-head, voiced by Will Arnett. He is a washed-up sitcom star from decades ago who now is a barely functional alcoholic. Throughout the first season, he formed a friendship with writer Diane Nguyen (Alison Brie), a writer whose tell-all book about him ends up becoming a bestseller. Naturally, he also develops feelings for her, but she rebuffs them, to instead date and then marry the annoyingly upbeat Mr. Peanutbutter (Paul F. Tompkins), a dog-person. BoJack’s agent is a large pink humanoid cat, named Princess Carolyn (Amy Sedaris). She is dating a man who is actually three children standing on top of each other in a trench coat, who goes by Vincent Adultman (also Brie). She has not yet caught on.

Lest these arrangements of human and animal characteristics seem random, or entirely visual, “BoJack Horseman” goes out of its way to build each of these characters’ species into their personalities (animal-ities?). Princess Carolyn has an enormous cat-tree in her apartment. Mr. Peanutbutter returns from the doctor wearing a large plastic collar so he can’t scratch himself. In a throwaway visual gag from the beginning of Season 2, a hawk swoops down to catch a mouse, but because they’re both humanoid, the hawk wraps his skinny jeans around the mouse’s head before flapping his flannel-clad arms away.

This is BoJack Horseman’s Hollywood—or, as a Season 1 incident broke the “D” of the Hollywood sign, “Hollywoo”—where the never-ending high school house party that is the film and television industry is populated by unbelievable creatures motivated by baser instincts. It’s all cosmically funny, but you have to zoom out, a lot; in the meantime, BoJack Horseman is a guy working through a depression he’s ignored for decades, trying to appreciate both the beauty of life and its inevitable, bizarre lumps. For the viewer, the show is a continual attempt to both understand the rules of the world and keep up with the story, and once I began to accept that, the show really opened up for me. Made with live-action actors and real sets, it would be a dark comedy on addiction, living somewhere on the fringes of cable. But through animation, it has that same appeal, with a refreshing dose of sparkling lightness—characterized both by the theme song, written and performed by indie band Grouplove, and the incredible array of voice actors that the show has drawn, including Stanley Tucci, Margo Martindale, Henry Winkler and Wallace Shawn.

The upshot is that "BoJack Horseman" is deeply, ridiculously funny, making almost pun-like textual jokes out of its world. The rep for Penguin Books is, obviously, an actual penguin (voiced by Patton Oswalt, no less). A seal named Neal McBeal is a Navy SEAL. And in a detail that made me laugh out loud, a recurring character is said to be dating Andrew Garfield, who naturally loves lasagna and hates Mondays.

It’s also a show for people who love TV, which lent it particular appeal to me. It’s rather fitting that “BoJack Horseman” is on television’s great disruptor, Netflix, because the show is wickedly sharp about the foibles of the industry. In one of the second season’s most vicious gags, a woman who was in a coma for 30 years is put in charge of a major broadcasting network. Her pitches: A show called “Hey, We Think You Can Dance!” and a special where marketable star David Copperfield makes the World Trade Center disappear.

The fifth episode of this second season might be the most daring attempt the show has attempted—a completely bizarre half-hour where the show takes its own conceit to the next level by visiting chicken farms, exploring the idea of anthropomorphic animals eating meat by literally confronting it. It culminates in a car chase filmed on MSNBSea (the anchor is a whale) and includes a side plot, starring Khandi Alexander, about cop-show tropes. There is also a whole thing about Jane Campion, and the takeaway, depressingly, is that celebrity can get you anything. Truly, I cannot entirely explain it; and yes, it might be better stoned. But it is a reminder of the gorgeous possibility of animation, the seductive pull of a world with different rules—even for us lonely, disaffected, cynical adults.